In the summer, marinas along Maine’s coast are like bustling cities filled to bursting with sojourners. But come late fall, the marinas that don’t shut down for winter transform into tight-knit small towns when a singular breed of tenant takes up residence: winter “liveaboards.”

Unlike in more temperate parts of the world, Maine’s winter liveaboard community is small, although an exact number is not known, said Susan Swanton, the executive director of the Maine Marine Trades Association.

There are “large” winter liveaboard communities, like at DiMillo’s Marina in Portland, which has 75 winter tenants this year (but has room for 115 boats) and smaller ones, such as Belfast’s Thompson’s Wharf with 10 boats (there’s room for 10 to 12 boats, depending on size) and then there are ones and twos at small marinas and shipyards and fishermen who live on their boats.

The demand for winter liveaboard accommodations, Swanton said, is not high. “Most people are not really looking to live that lifestyle.”

While many people think—and some winter liveaboards themselves say—that folks who live on a boat in Maine in winter are nuts, there are some intrepid souls who thrive on that lifestyle.

THE TROPICS IT’S NOT

Leah Kruger, 29, spent seven years of her childhood living aboard a boat with her family: four of those years circumnavigating the globe. Life aboard was a dream she shared with the man she married, Maine native Jonathan Tetro, 30, but when the Vancouver native began discussing with her new husband the possibility of living in Maine in the winter, she was daunted.

“We spent the first three years of boat ownership in the tropics in bikinis and sunscreen,” she said. “A Maine winter is a whole new ball of wax.”

After spending their first Maine winter living in a rental cottage with their boat in storage, “We realized, ‘We’re not home,’” she said. “We really missed living on the boat.” They decided to try living on their boat, Brio, a 33-foot sailboat, year-round—and through a Maine winter. This will be their second winter as year-round tenants at DiMillo’s Marina in Portland.

As winter liveaboards, the two things they think about most are heat and water, Kruger said. DiMillo’s closes the water at the dock because the lines will freeze. There is one spigot available to winter tenants for water access. Kruger and Tetro run 250 feet of hose to get to it when they need to fill their water tanks on board, about every two weeks.

They use the water for showering (although it’s better to use the marina’s showers rather than their own because introducing humidity on the boat isn’t a great idea), cooking, drinking and cleaning, but not for flushing the toilet.

During the winter, the marina does not offer pump-out service. Discharging into the water is not permitted. So, for calls of nature, they use a composting toilet, which has a tank for liquids and a tank for solids. (The marina does have two toilets available for tenants to use, but who wants to walk down the dock to the restrooms and possibly wait to use the toilet on a cold winter night or morning?) The liquid tank needs to be emptied about every three days and the solid needs emptying about once a month.

The cold is probably the first thing people ask about when they hear Kruger and her husband live aboard their boat in the winter, she said. Most assume it would be intensely cold, but by insulating the hull with ¾-inch foam and shrink wrapping the boat in clear plastic, they keep their living space below deck (about the total space of a 12-foot by 15-foot room) at about 70 degrees. On a bright, sunny day, being on deck under the shrink wrap is toasty, similar to being in a greenhouse.

They use an electric oil heater and a space heater as their main sources of heat. If it gets below 20 degrees, these two heaters struggle to keep the whole boat consistently warm, especially at the ends of the boat, but for those very cold days, they have a diesel heater as a backup.

Living aboard, Kruger and Tetro saved significantly on heating costs. To heat their boat last winter, it cost them about $100 a month versus the $400 a month they paid for heat when they rented a house the year prior. On board their boat, “We were never cold,” she said, but they were always freezing in the house they rented.

Living aboard has economic advantages, but it isn’t a cheap endeavor, either, Kruger said. On their boat, they’re living on the waterfront in downtown Portland (they pay $5,200 a year, plus electricity in the winter, to be tenants at DiMillo’s), something they couldn’t afford if they had to rent an apartment or buy a condo downtown. However, they had to buy their sailboat and put in considerable money every year maintaining it.

From Kruger’s perspective, the biggest financial advantage is in their lifestyle. “To me, the financial impact comes more from [that] we live a much simpler life because we live in a very small space,” she said. “We don’t have to own all this stuff that goes with living in a conventional house. It means you’re more mindful about how you spend your money and what you bring into your life.”

When Judi, 63, and David Erickson, 74, decided to live year-round aboard their 35-foot sailboat, Vahana, they sold their Portland apartment building and practically all their belongings. Only the first year of the 12 years they’ve lived on board their boat in the winter has been spent in warmer climes. Every winter since, at least part of the cold season has been spent on board. These days, Thompson’s Wharf in Belfast is their winter home.

“When I tell people I live on a 35-foot sailboat, they look at me like I have rocks in my head,” said Judi Erickson. “They ask, ‘How do we do laundry?’” (They use a laundromat.) “We do not pound [laundry] on the rocks, but if push comes to shove,” she jokes.

You become self-reliant living aboard a boat, she said, and quickly learn to be creative with the little you have. The Ericksons don’t have a toaster or a microwave and their fridge is an ice box that doesn’t require ice in the winter because the hull is cool enough to keep its contents cold.

Sharing what amounts to about 180 square feet (or less) of space is challenging, so you learn how to create space for yourself and the person you’re living with, the Ericksons said. That might mean David is doing one thing above deck under the shrink wrap while Judi is doing something else below deck.

“It probably sounds like an austere lifestyle, but there are some really remarkable advantages to just being able to live on the water, even in the wintertime,” David Erickson said. “Penobscot Bay is one of the prime cruising grounds in the world. That’s our backyard.”

In their backyard, they become attuned to changes in the weather and in the bay itself, and then there’s the joy of communing with the creatures that make the bay their home—loons, river otters, pilot whales and seals—and humans, too.

One of the pleasures of living aboard in the winter is being a part of a tight-knit community of people, say the Ericksons and Leah Kruger. You’ll find people of all ages, some with families and some solo, from a wide variety of places.

“In the winter, all the transient boaters leave. All the mega yachts leave,” said Kruger. “The only people left are these really eclectic characters who for one reason or another think that living on their boat in the winter is an awesome idea.” 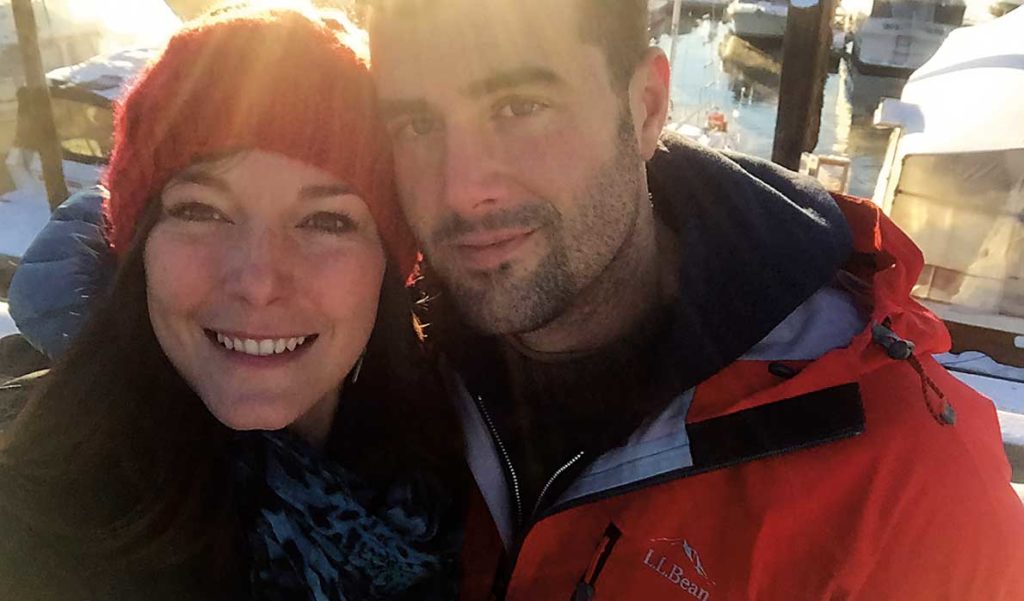 Leah Kruger and Jonathan Tetro take a "selfie" at the marina.