It’s close to 90 degrees in the Midcoast as this is being written, tourists are strolling the streets of Rockland and for most of them, it’s cooler than the air they left at home.

Last week, the Maine Lobster Festival returned to town for its 59th year, and the U.S. Navy sent its USS Oak Hill to complement the buzz of cooking and consuming our signature crustacean. Standing out in their khakis and sharp dress whites, the sailors—both men and women—were a welcome change to the street scene.

The ship is based at Camp Lejeune, N.C., and several of the sailors said Maine—even at 80-plus degrees—was significantly cooler than home.

“Bean sold her interest in the company to her employees in May,” reporter Melissa Waterman writes. “Yet, to all appearances, everything is just the same. Except perhaps for the smile on president John Petersdorf ’s face.”

Bean started the company in 2007 at the age of 66, the story continues.

“Her stated intent was to ensure that Maine lobster was processed and marketed in Maine by Maine people.”

What is the defining characteristic of a bed-and-breakfast inn? Is it popovers in the lobby, or four poster beds in the rooms? Or is it the size of the building?

The Mount Desert Islander reports on some controversy surrounding a plan to demolish a 12-room motel in Bar Harbor and replace it with a new 3- and 4-story, 36-room B&B.

“Neighboring business owners and the planning board are questioning whether the proposed new business can properly be called a bed-and-breakfast,” the paper reports. The town’s design review board has asked for design modifications.

Hotels and motels are not allowed uses in the zoning district the property is located in, but B&Bs are allowed with site plan review and a conditional use permit.

Samuel de Champlain deserves to be a favorite explorer for we Mainers. He visited and wrote extensively in journals about our region, from Cape Cod to current day Bangor, and from Nova Scotia to Quebec City, which he helped establish. He also honored and respected the native people, working with them as partners in his endeavors.

But his first foray into colonizing New England for the French failed. St. Croix Island, near Calais in the river that divides the U.S. and Canada, is part of both nation’s national park systems, but the Quoddy Tides reported that it may not be around much longer.

“A group of approximately 20 scientists from the park service and elsewhere … convened recently to address the impact of climate‑related challenges facing the St. Croix Island International Historic Site,” the paper wrote. “Each of the scientists readily spoke to the cultural importance of St. Croix Island, while recognizing that the site is in the process of disappearing.”

Erosion is the main culprit.

“The island’s vulnerability was highlighted last year when the April 7 storm hit. Though not a particularly powerful storm, it happened during a spring high tide, resulting in significant displacement of material,” the story continued.

“It was really a wake-up call,” said Dan Odess, chief scientist for cultural resources for the U.S. park service. “We need to start managing for loss.”

It was shocking, tragic news three years ago. A car traveling toward the Port Clyde wharf struck and killed a 9-year-old boy waiting for the Monhegan boat. The boy’s mother and brother also were seriously injured. The Bangor Daily News reports that “recently released court documents reveal at least $550,000 has been paid out to settle a civil lawsuit” related to the crash.

Several Maine communities have adopted ordinances regulating the use of pesticides on lawns and gardens. The issue is especially critical in coastal towns, where the chemicals can wash into bays and rivers and threaten shellfish and other organisms.

But these new approaches remain works in progress.

The Forecaster newspapers report that South Portland’s city council is working on a pesticide ordinance, but is moving away from including fines for non-compliance. City officials acknowledge that enforcement will be difficult, but that “greatly restricting or eliminating the use of pesticides” is worth the effort, according to Julie Rosenbach, the city’s sustainability coordinator.

“Enforcement will be a challenge, especially on private property, so our goal is to work with people in a more positive way to bring them into compliance,” she said.

Rockland-based Reade Brower, who purchased Maine Today Media last year, which includes the Portland Press Herald and Maine Sunday Telegram, the Kennebec Journal in Augusta, the Morning Sentinel in Waterville and the Coastal Journal in Bath, is planning to acquire two Vermont newspapers.

The Press Herald reports that Brower, who also owns and operates the Rockland Free Press and Alliance Press in Brunswick (which prints The Working Waterfront), along with Chip Harris, has an agreement to purchase the Rutland Herald and the Barre-Montpelier Times Argus.

It’s not quite news, but this caught our eye. The website AtlasObscura wrote about a quirky bit of infrastructure in York.

“While many tourists prefer the more direct path to the coast,” the site notes, “the explorer [who] opts for the scenic route is well rewarded. State Route 103 is such a road, and near its eastern terminus one can find the Wiggly Bridge.

“Visible from the road, the steel structure juts out of the landscape with an arced wooden deck spanning a mere 75 feet between two petite green towers. When walked upon, the deck bounces and flexes, banging back and forth in the anchorages.

“Local lore claims that it earned its name from a perceptive group of Girl Scouts who noted the bridge’s ‘wiggly’ nature.” 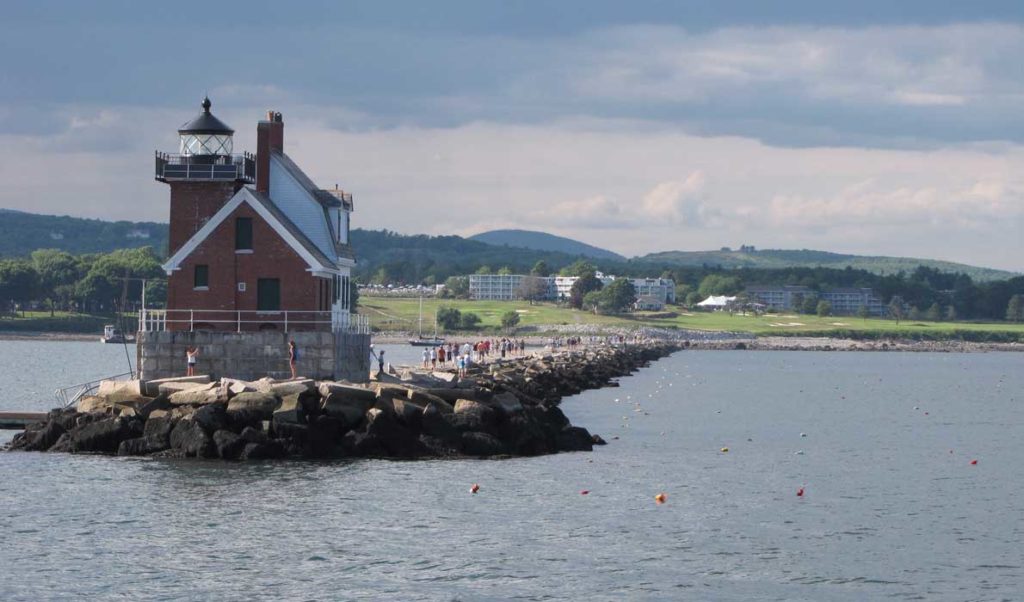 Tourists enjoy a stroll on Rockland's breakwater in late July.