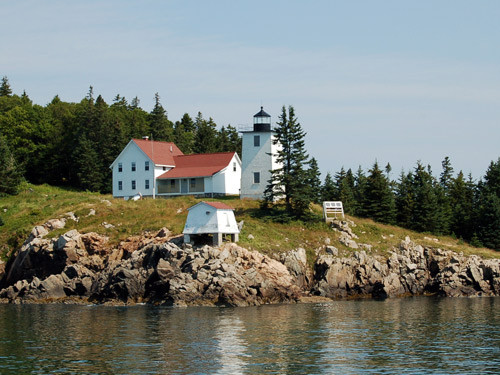 Two small island communities working to preserve their lighthouses are learning about each other’s efforts through field trips.

Committees from Isle au Haut and Swan’s Island say the burgeoning friendships and shared information are helping in the daunting task of restoring 100-plus-year-old buildings and towers, walkways and foundations in hostile marine environments.

The friendships were fostered by the outreach work of the Sunbeam, the Maine Seacoast Mission boat that provides services to remote islands.

The lighthouses have seen major improvements in the nearly 20 years since being transferred to their island towns. But challenges lie ahead.

Jeff Burke of the Isle au Haut friends group has close ties with the light, which was the last beacon to be built in Maine, constructed in 1907. He operated the keeper’s house, attached to the light tower by a ramp, as a bed and breakfast inn from 1986 until selling it in 2012. The house had been auctioned off by the federal government in 1934. In 1998, 22 lights were decommissioned and transferred to nonprofits and towns. 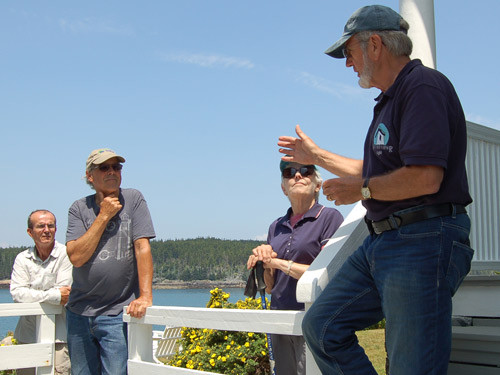 The friends group got back in gear, and two years ago landed a state historic preservation grant to do engineering work. Steel beams supporting the floor of the light tower were corroded, putting the floor in jeopardy, Burke said. The first phase of the plan is to “stem the deterioration,” including replacing blocks of wood that form the base of the walls with ceramic blocks that won’t compress.

The engineering firm, Resurgence Engineering of Portland—which is also the firm the Swan’s Island group is using—estimated the cost of the first phase at $65,000.

The second phase is more daunting, and will be tackled a few years out.

“We have some major, major work to do on the exterior,” Burke said, including replacing brick work on one side, repairing cast iron work, and strengthening the 44-foot-long bridge that links the tower to the land. That work could cost about $300,000.

Once the renovation is complete, the friends group wants to install a 1,500-pound cast bronze fog bell that once hung off the tower. The original bell is long gone, but Burke is confident other versions can be had, especially since the American Lighthouse Foundation and the U.S. Lighthouse Society both endorse the plan. The U.S. Coast Guard, which he said has been very helpful, will assist in locating a bell.

Once returned, “You can sail by and practically reach up and touch it,” Burke said of the bell. It won’t work as a navigation aid, though. “We’ll use it for ceremonial purposes.”

Community concern about Burnt Coat Harbor Light on Swan’s Island dates to 1995 when the federal government planned to demolish the tower structure, which was built in 1872. Islander Roberta Joyce formed a group to successfully fight the plan.

“She saved the tower and she set up a lighthouse committee,” said Eric Chetwynd, a member of the current friends group. Once saved, though, restoration work was not begun until 2005. In 2007, a historic preservation plan was established.

“We had to kind of nickel and dime our way through,” Chetwynd remembers, but a nonprofit—Friends of the Swan’s Island Lighthouse—was formed. The town owned and operated the facility, but the nonprofit raised funds.

“We would raise small amounts,” he said, with chowder cook-off events and even lemonade stands.

“At first, we focused on the keeper’s house,” Chetwynd remembered, “which was in terrible shape, with the roof about to fall in.” A new roof cost $15,000 and the foundation was restored for $40,000. The vintage windows were removed and restored in Boston and reinstalled.

Then it was on to work on floors, the kitchen, and bathroom.

“We’ve opened it to the public, and made it into a kind of museum and gift shop,” he said. The second floor is now an apartment, and the first weekly renters arrived in late July, paying $1,000.

The smaller bell and fuel structures have new roofs, but “the elephant in the room” is the tower, Chetwynd said. Some lead paint and rust remediation has been done, and window frames replaced, at a cost of $45,000.

But a full restoration, including addressing brick work, will cost $350,000, an estimate provided by Resurgence Engineering.

The town owns the 20-acre site on which the light sits, and it has become a kind of park, he said, with 1.8 miles of trails

HANDS ACROSS THE WATER

The visits and information exchanges have been valuable, both men believe.

“It’s been great fun,” Chetwynd said. “A lot of nice relationships have been formed.” The Swan’s Island effort is about ten years ahead of the Isle au Haut work, he added, so sharing what the group learned along the way will help.

The Swan’s Island group won a “Keeper of the Light” award from the American Lighthouse Foundation in May for its work. 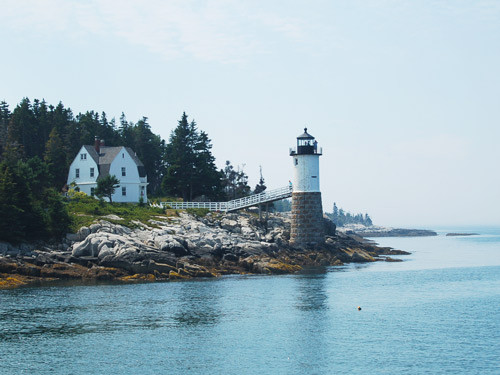 Financial officers from each group have talked and shared sources of funding that could help each project.

Burke agreed the meetings were a success.

“It was just delightful,” he said of the July 20 visit hosted by Isle au Haut, at which they “had a picnic in the shadow of the tower.” The groups discussed “how to build support, do public relations” and other components of the effort. 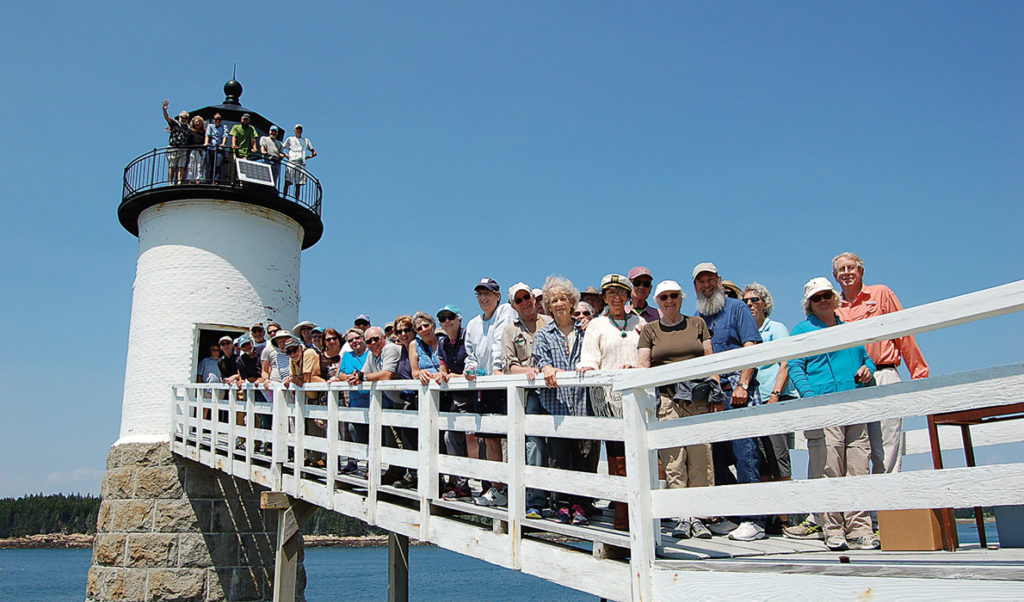 Members of the two island lighthouse committees pose on the walkway at the Isle au Haut light.