Even with the ubiquity of radar and GPS, navigating the waters off the Washington County coast can be treacherous. The bays and estuaries are often foggy, and the region sees the most dramatic tidal range on the Maine coast.

So when the fog horn on Libby Island three miles off Machiasport went silent, fishermen and their families grew concerned.

Dawn Lamoureux-Crocker, a teacher at the town’s Fort O’Brien Elementary School, was one of those concerned people, worrying about her husband, Ben Crocker Jr., who lobsters from the harbor. Ben estimates 65-70 boats use the harbor, including lobstermen and those servicing salmon pens.

And that’s why the lighthouse and fog horn are so important. Libby Island—actually, Big Libby and Little Libby, totaling 120 acres, but separated by a bar that disappears at high tide—is the site of many a shipwreck, Dawn says.

Little Libby has “a lot of jagged rock,” she said. “It’s pretty dangerous.”

A lighthouse has been on the island since the early 19th century, according to NewEnglandLighthouses.net. A fog horn was added to the light station in the late 19th century, and, to give a sense of its importance, “In 1918, the fog signal was sounded for a total of 1,906 hours, the most of any Maine station,” according to the website.

The lighthouse keeper’s house was removed by the U.S. Coast Guard, probably in the 1970s or 1980s, Lamoureux-Crocker said, but the light tower remains and is powered by a solar array.

In asking coast guard officials about the silent fog horn, she learned the light might also be on the way out. “Don’t get too attached to it,” she was told. It likely would be replaced by a lighted buoy.

For now, she says, “The lighthouse is there, they’re taking care of it, and suddenly one day there’s no fog horn.” She learned from the coast guard that using the fog detection system that activated and operated the horn “was not cost effective.”

The fog horn is now operated by a VHF radio-keyed trigger, so boaters approaching the island could activate it if fog obscured the view. But she worries about the device not working, and in fact, she and her husband tried to activate it from their boat, and failed three times before succeeding. And she also wondered if fishermen knew the code.

Signal will operate for 45-60 minutes

Lamoureux-Crocker presented her students with the problem, and they hit upon the idea of creating and distributing cards to those who use the harbor.

“One of the boys, Ryan Murphy, stood on the dock and handed out the cards,” she said. The 10-year-old found that of those he spoke with, only one knew how to operate the fog horn.

“The fog horn would be far more important to me to keep going than the light,” she said. “There are people who depend on it.”

Lamoureux-Crocker hopes to form a Friends of Libby Island group to address such issues. Currently, the island is owned and managed by the U.S. Fish and Wildlife Service. 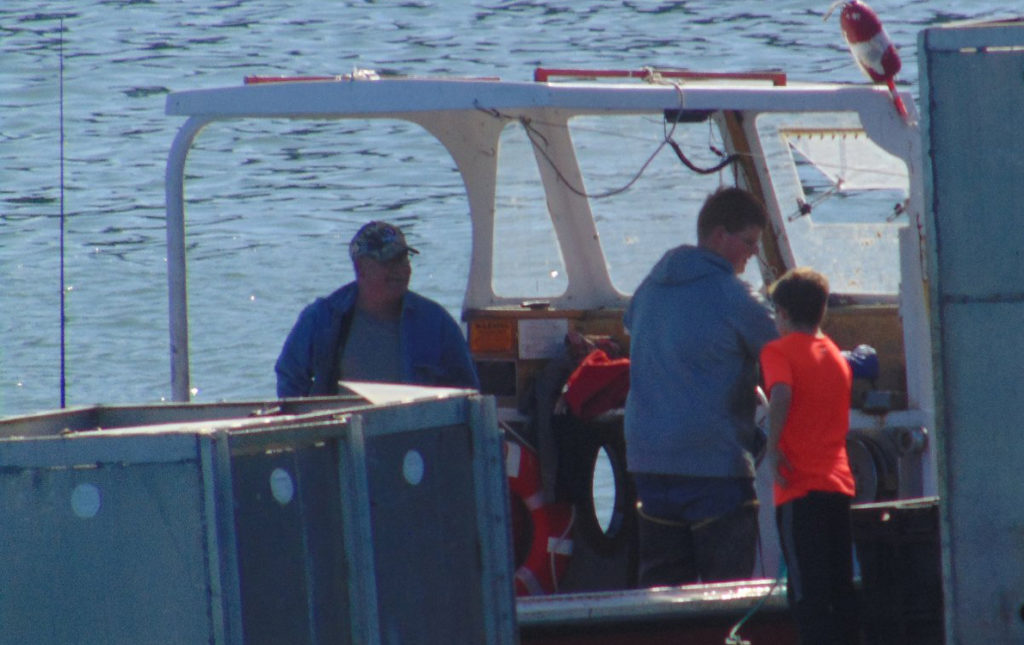 Ryan Murphy hands out cards explaining how to turn on the Libby Island fog horn.