Block Island, 12 miles off the coast of Rhode Island, has a year-round population of about 950. Residents pay up to 60 cents per kilowatt hour for their electricity, which is generated on the island with diesel generators. Summer brings an influx of visitors and vacationers—and their money— with as many as 15,000 people on the island on a nice summer day.

It looks like offshore wind is coming to waters near Block Island.

A few years ago, Rhode Island used an ocean planning process to identify potential sites for an offshore wind farm. The process, the Ocean Special Area Management Plan, or SAMP, pulled together a variety of information about the ocean environment and the people who use it. Through the Ocean SAMP process, Rhode Island was better able to understand how and where to site an offshore wind farm in a way that minimized conflicts.

As Kim Gaffett, an island resident said at the Island Institute’s recent energy conference in Portland, “Before you put something in the ocean you should know what you might possibly disrupt.”

Through numerous public meetings, a potentially suitable site was identified and Deepwater Wind received one of the first offshore wind power purchase agreements in the country and state approvals to develop a pilot project. Being a leader in offshore wind and renewable energy is important to Rhode Island’s economic development and energy goals. But there are impacts.

Block Island, as Gaffett noted, “is a little island out in the ocean. Everybody in the state is happy because Rhode Island is putting up an offshore wind farm and it won’t impact anybody—except us out on Block Island.”

In 2009 and 2010, Maine went through a similar siting process, analyzing data and potential sites for testing floating offshore wind technology prior to grid scale development. Three test sites were selected, including one off Monhegan, and the University of Maine started to develop a pilot project that would be deployed in the waters just south of the island.

Speaking at the energy conference, Suzanne MacDonald, the Island Institute’s community energy director, said both Block Island’s and Monhegan’s experiences offer lessons “about how developers and communities should interact.”

Developers and project proponents need to help impacted communities engage in the regulatory process, MacDonald said, to understand the details of the project, and to be able to effectively negotiate for tangible benefits.

Gaffett and others on Block Island realized they needed to attend a lot of meetings on the mainland where decisions were going to be made by various state agencies. The island’s town council, made up of ordinary people, had no expertise in power purchase agreements, designing rates, ensuring decommissioning funds were set aside, or fairly and appropriately allocating the cost of the cable.

“When a developer comes in with all sorts of resources saying, ‘Trust me, this is going to be a good thing’ and you are sitting on the town council, you wonder, ‘How do I know for sure?'” Gaffett said.

Locals had to attend meetings and hire consultants to be sure they wouldn’t be left holding a very expensive bag at the end of the day, she said.

On Monhegan, the community had similar concerns. Finding time during the busy summer season was a challenge. In both the Block Island and Monhegan cases, Deepwater Wind and UMaine reimbursed the community for expenses incurred during participation in the process.

“We don’t have a voice here, so developer, you need to help give us a voice,” is how Gaffett characterized it.

Deepwater Wind hired a community liaison to transmit information to the community and relay community concerns and questions. By hiring someone from the community who was trusted, the developer was able to develop a more civil discourse, conference participants said.

On Monhegan, the Monhegan Energy Task Force (METF) helped with the flow of information between the community and the UMaine and Maine Aqua Ventus (MAV), the consortium developing the project. It also encouraged MAV to reach those who could not attend some of the community meetings because they had to work.

UMaine’s Jake Ward said he and his colleagues were naïve in understanding how to communicate with the locals and how the islanders communicated with each other. Many missed that the project was evolving from a short-term deployment of a one-third-scale turbine to a 20-year deployment of two full-scale turbines. Having the communications structure between METF and UMaine that is now in place would have helped residents better understand all aspects of the project, he said.

Marian Chioffi, co-chairwoman of METF, noted that Monhegan didn’t have a unified voice and that forming METF gave the island a better, more formal way to communicate with both UMaine and the community.

On Block Island, there is general support for the wind project, though some remain strongly opposed. On Monhegan, the future of the project is uncertain; UMaine is working to complete the design and engineering of the full scale pilot project after being award a lower level of federal funds than hoped for. Funding to build the project has not yet been identified.

As ocean planning continues in New England, finding ways to help communities participate in federal and state decisions about offshore wind, and other activities, such as offshore aquaculture or sand and gravel mining, is critical.

This is the third in a series of stories exploring changing ocean uses that are the focus of the regional ocean planning process. For more information about Island Institute’s marine work, contact Marine Programs Director Nick Battista at nbattista@islandinstitute.org; for more information on regional ocean planning, contact John Weber at jweber@northeastoceancouncil.org 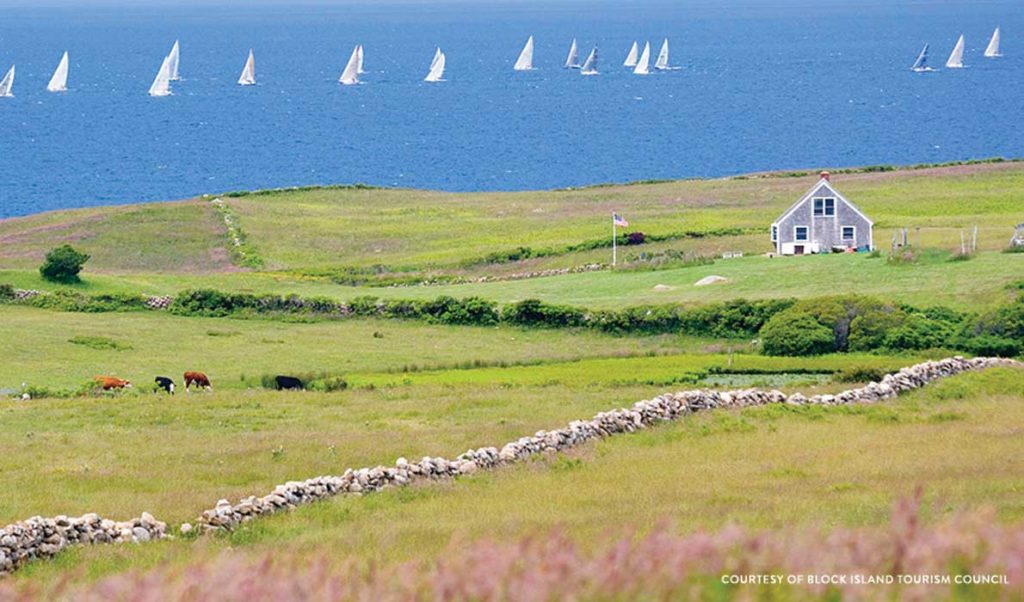