Marine botanist Sylvia Earle opened her April 30 lecture at the University of Maine with a simple, but stunning fact—the surface of Mars, she said, is better mapped than the floor of the world’s oceans.

Earle herself is stunning. She has spent 7,000 hours underwater, has lived under the sea for weeks at a time, taken an untethered walk at a depth of 1,250 feet, and in 1998 was named Time magazine’s first “hero of the planet.” In the 1990s, she was the chief scientist at NOAA.

At 82, she remains awed by the underwater world, and urged the several hundred students in attendance to think about that world as the most exciting frontier for scientific inquiry.

About 10 percent of the ocean floor has been mapped, Earle said, and questions about how it functions and what it contains abound.

“We have seen so little of the oceans, measured so little,” she said. One example of the many important questions that should be answered by scientists is how deep does photosynthesis occurs in plant life. It has been found to occur at 278 meters (912 feet). The question is important because as much as 70 percent of oxygen in the atmosphere comes from the ocean, and 20 percent from diatons, organisms only discovered in the 1980s, Earle said.

“Take a breath, thank the ocean,” she said, and added that the seas also capture carbon pollution.

A dozen species can be discovered each hour during explorations at 300 feet, she said.

“How do we make peace with nature? That is the challenge of our times,” she asserted, putting the scientific and technological advances of recent decades within the context of the span of her own career.

“Ocean acidification was certainly not on my agenda when I began exploring the ocean in the 1950s,” she said, yet now it is a threat to the health of shellfish and other creatures.

“Each generation is better informed than the last,” but public policy does not reflect that advance, she said, just as the knowledge of the health threat of cigarettes came well before policies aimed at curtailing their use.

“I think I’m really lucky, but I think you’re even luckier,” she told the mostly teen and early 20s audience, because innovations have made exploring deep waters easier.

“Right now, it’s like the earlier days of aviation,” Earle said. And just as weather prediction took leaps forward with flight, weather balloons, and satellites, she said those same advances are needed in the sea.

Early in her career, the oceans were studied by killing sea creatures, which Earle compared to aliens dropping nets and hooks into cities to pull up dead people to study Earth. That approach is changing.

“We are blessed with a new era, new tools, a new respect,” she said. Respect for the life in the oceans was a theme.

“We came to respect whales, eagles, songbirds, owls,” she said, and the same respect must come for sharks. “We are not on their menu, they are on our menus,” with millions killed each year for their fins used in making soup.

“We’ve just got to stop taking sharks,” she said.

“I love kelp, and you here in Maine are blessed with quite a few variations on a theme,” she said, and described, with awe, the kelp forest that can be found on Cashes Ledge in the Gulf of Maine. “It’s an amazing habitat,” she said, an underwater environment as beautiful as Acadia National Park.

“I want poets to explore the deep sea,” Earle said, and fishermen to meet the fish they catch, not just those from the corporate, military, and science worlds.

But along with the awe and wonder she spoke of serious threats, such as deep-sea mining. People used to think “the ocean is too big to fail,” she said, but new problems like plastic pollution is akin to large oil spills.

“Must we mine the deep sea now? Shouldn’t we be exploring it first?” Showing a photo of an excavator-like piece of equipment, Earle said, “These are the teeth I worry about,” not those of sharks.

In recent years, Earle founded Mission Blue, an organization working to call attention to threatened areas of the ocean. 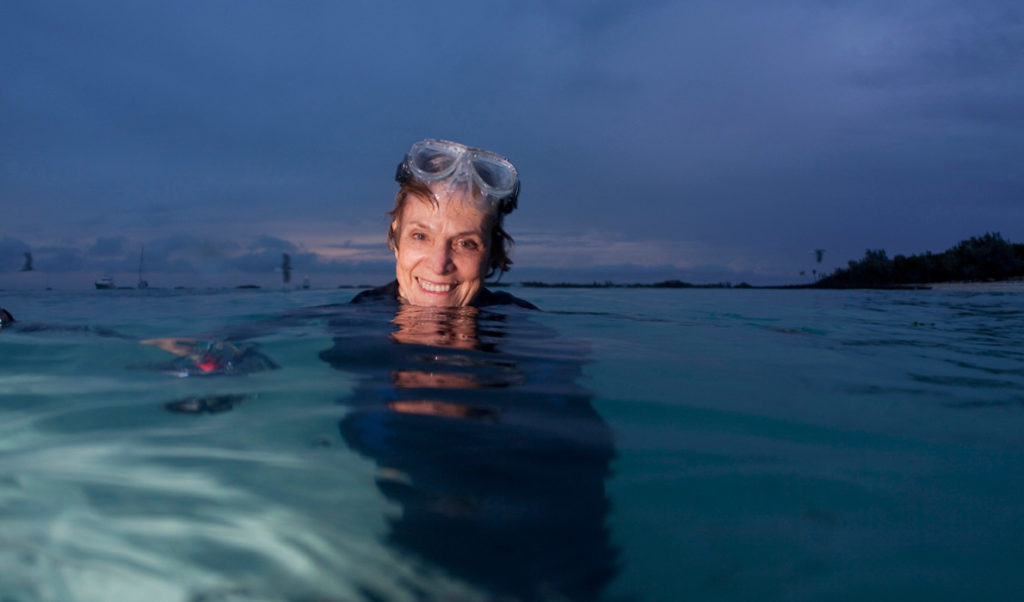 Sylvia Earle in her element.