Reflections is a monthly column written by Island Fellows, recent college grads who do community service work on Maine islands and in remote coastal communities through the Island Institute, publisher of The Working Waterfront. Angelique Williams is working with the town of Long Island in Casco Bay on telemedicine and aging in place as well as networking between islands and outside agencies also interested in on-island aging.

Once a month, the town of Long Island in Casco Bay comes together to enjoy a night filled with delicious food and conversation. During the last community dinner, we watched a documentary film, Aging on an Island: Voices from North Haven. As I looked at the audience, I saw many people with tears in their eyes.

Islanders connected with many of the sentiments that were captured in the short film. One of the voices from North Haven told the story of a dying old man. The old man’s last request was for the ambulances technician to open the window because he wanted to “see North Haven for the last time.”

That story broke my heart.

North Haven isn’t alone in facing these issues. There is a huge population of seniors who are finding it hard to continue to live on an island for many reasons. One of these reasons is isolation.

Long Island is a 30- to 45-minute ferry ride from Portland. The distance and the boat schedule makes grocery shopping, doctor visits and other tasks more difficult to manage, especially in the winter.

Another reason elders struggle to age on their home island is a lack of infrastructure. In general, many of the houses were constructed many years ago. This means that most of them are not able to continuously meet the needs of the aging population. In order for seniors to “age in place,” each house needs to be handicap accessible.

Though the barriers for seniors to age on their island are many, it remains their home. Over the course of my three months here, I have heard many first-hand accounts of seniors who moved to town because their needs were outside of what could be met on the island. All of these stories that I have heard touched my heart. Also, I can tell that each of these stories brought pain to the community as a whole. I couldn’t imagine having to say goodbye to everything that I know and love.

Long Islanders care about each other and the community as a whole. Being a neighbor on Long doesn’t just suggest physical location, but rather a relationship. If someone is in need of help, everyone would do what they could to help.

I was raised in New York City, where I did not know my neighbors. People move in out of my neighborhood all the time. Therefore, my sense of community wasn’t based on who I live near but my family and friends who lived far from me. And people in my neighborhood did not help me without wanting something in return.

It seems like every day I am taken aback by the pure acts of kindness that is directed toward me. Many people have given me rides somewhere or given me seafood. Many people have told me, “If you need something, just ask.” I am still learning how to maneuver within this new culture.

When a person from the town of Long Island refers to the community, it encompasses people from the entire island, not just a small cluster of people. I have never lived in a place that truly wants the best for one another.  As someone who lived and visited many parts of the world, I can truly say there isn’t a place like it. I understand why many people would want to live on Long for the rest of their lives. After watching my new community engage with the film, Aging on an Island: Voices from North Haven, I have a new understanding of my purpose here. 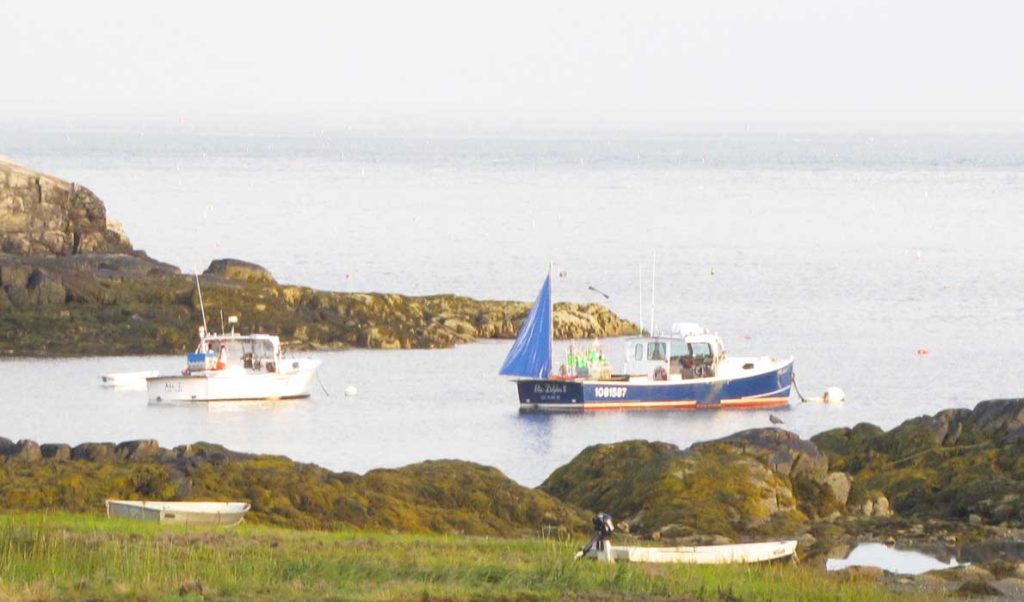 Boats in a cove on Long Island in Casco Bay