A March 16 Washington County Superior Court ruling will allow private landowners to block harvester access to rockweed in the intertidal zone. The ruling is likely to be appealed to the state’s Supreme Judicial Court.

Environmentalists and others have expressed concern about the impact of harvesting wild seaweed on the marine environment. But there is an economic element, as well.

Patrick Keliher, commissioner of the state’s Department of Marine Resources, said he was disappointed in the decision and that he plans to continue managing seaweed harvesting as a fishery. DMR will be filing a brief to add information for the appeals court to consider.

In a statement issued after the ruling, Keliher stressed that the decision doesn’t apply to other fishing activities in the intertidal zone that have been protected by Maine law since colonial times.

“It is important to note that in making this decision, the court made clear that it does not apply to other fishing activities that take place in the intertidal zone, such as worming, clamming, or digging mussels,” Keliher said. “Those activities remain protected under Maine law, which establishes that public trust rights in intertidal land include the right to use intertidal land for fishing, fowling and navigation.”

According to DMR, 134 seaweed harvesting licenses were issued in 2016. Department spokesman Jeff Nichols said those harvesters landed 13.9 million pounds of seaweed, of which rockweed represented about 97 percent. The overall landed value of the product—the amount paid to harvesters—was $468,105. The overall value of rockweed, after it’s been processed into retail products, is around $20 million per year, Nichols said.

Robin Hadlock Seeley, a Cornell University senior research associate and Washington County resident, said she’s pleased with the decision and thinks it will conserve more marine habitat. Landowners on the rockweed registry—who own more than 500 land parcels in Maine—will be able to protect the rockweed for conservation if they choose and land  trusts will be able to “fulfill their mission of protecting key coastal wetlands for all the  species that use rockweed, including commercial species,” she said.

Seeley said rockweed is ranked fourth in importance among coastal species in the Gulf of Maine. Rockweed (specifically Ascophyllum modosum) is an ecosystem engineer, she said, “that forms a structurally complex and highly productive habitat of marine ‘trees’ at high tide and buffers intertidal temperatures at low tide.”

Rockweed canopies “facilitate understory biodiversity” and serve as habitat for over 100 species, including 25 commercial species of fish, shellfish, seabirds and shorebirds that are in decline. Rockweed beds also help buffer the coast from storm surge.

Seeley was critical of DMR.

“Rockweed harvests have proceeded under DMR management since around 2000 even though important questions about harvest impacts are unanswered,” she said.

Among the unanswered questions are what level of harvest would maintain rockweed habitat structure and function, she said.

Shep Erhart, president of the Maine Seaweed Council and co-founder of Maine Sea Vegetables, said harvesters realize that rockweed and other types of seaweed are valuable resources that need to be managed. But he thinks leaving it to the upland owners to decide how harvesting is managed will be like “the Wild West.” Some owners may want a share of the profits and others may request that harvesters not come within a certain distance of their property.

Erhart believes good management practices could alleviate many concerns and that DMR is in the best position to do that. DMR was already working on a new plan before the lawsuit was filed, he said.

“All that’s been put on hold now,” said Erhart. The Maine Seaweed Council also plans to file a brief in support of an appeal because of the potential impact on the seaweed industry.

“Rockweed, which provides a critical habitat for juvenile lobster and fish, has for too long been unsustainably harvested by commercial operators for short-term gain,” he said.  “This has left the intertidal area looking like a clear-cut forest and destroyed these habitats for years, if not permanently.”

He suggested the court put the responsibility for protecting the economic and ecological value of the resource lies with landowners, “Who can now put a stop to irresponsible harvesting in the intertidal zone, much like landowners can control timber harvesting on their lands.” 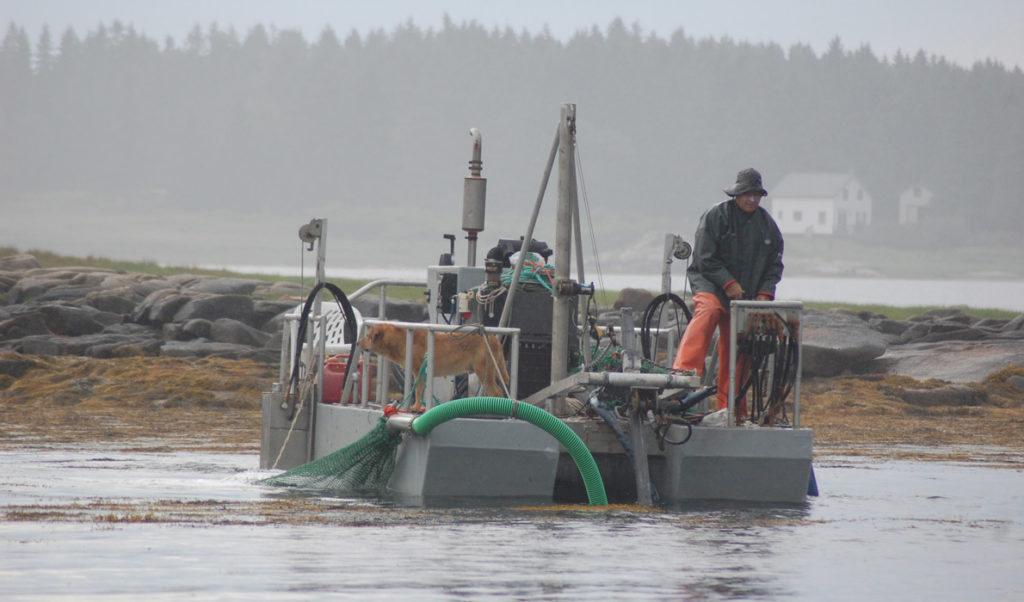