By Laurie Schreiber//Photos by Leslie Bowman

Anyone who’s been to any confab in the various Maine fisheries over the past couple of decades will likely recognize Kristan Porter—a steadfast presence and an articulate voice in the thorny world of management and policy.

“I’m not on the 27-year plan,” Porter says with a laugh. “But we’ve got some really good young people on the board. We’ve just got to make sure, when we go to the legislature and go to these council meetings, that they tag along and learn the ropes and are ready to step up.”

Porter is typically on the go. Usually, he’s on the water hauling lobster traps or dragging for scallops, or performing maintenance on his two boats and gear, or representing the industry at countless industry and management meetings. The meetings take considerable dedication from the travel standpoint alone.

“If you’re in Portland, you can zip to a council meeting in Massachusetts fairly quick,” he says. “But it’s six, seven hours for me. I was in Providence, Rhode Island, this Tuesday for a meeting,” he said. “So, basically, Monday was a travel day. I got home Tuesday night at 9 o’clock and was out fishing Wednesday morning.”

An easygoing person, Porter comes across as quietly thoughtful. On a Sunday afternoon, he was taking a rare moment away from work, ensconced in the beautiful 1910 home he shares with his wife Brenda and their son Brandon (two daughters, Whitney and Ashley, are grown). The house, on the shore in the Washington County town of Cutler, has picture windows overlooking a working harbor that includes his Wesmac 42 lobsterboat named after his daughters and his 40-foot Novi scallop dragger, named for his son.

Growing up in Cutler, he has deep affection for his small community, love for his work, and a willingness to speak for its cause. He understands the importance of building relationships and collaborations across various interests. 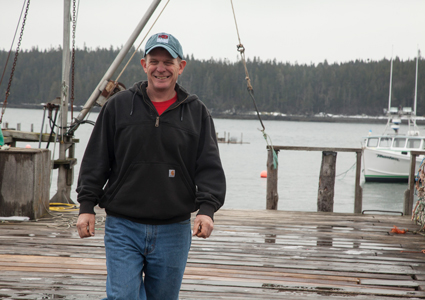 “It takes a lot, sometimes, to be able to bite your tongue,” he says. “You’ve got to be able to lay out the facts and be level-headed. But you have to do that in a respectful way. The people who do well in fisheries management—or in anything, probably—are those who can go to a hearing or a meeting and fight for their side but, after the meeting, can go have a beer with somebody and be cordial. Maine is not a very big state. You can’t burn your bridges.”

Cutler hasn’t changed much since he was a kid, says Porter, who is in his late 40s. The fishing boats are larger and more expensive than they used to be. But basically, the community’s families and rural feel have endured. With a population of just over 500, Cutler is a place where everyone knows each other.

“If something happens, everybody’s there to help,” Porter says. “Everyone looks out for each other. “

Porter’s family goes back to the town’s settlement in the 1700s. Various members of previous generations fished—lobstering, tub-trawling, hand-lining, stop-seining. Fishing skipped a generation with Porter’s father, a carpenter who built many of the homes here.

Raised half a mile up the road from his home today, Porter fished with older cousins in summers and on weekends. He loved it. Still, heading to the University of Southern Maine, he thought he’d become an industrial arts teacher—until he finally got into a classroom and discovered he didn’t like teaching.

It was the early 1990s, when groundfish stocks were tanking and regulations were tightening around the lobster fishery. Correctly predicting it would eventually become more difficult to get a license in various fisheries, Porter realized that if he wanted to fish, it was time to jump in. So he returned home, bought a boat (putting up his ’68 Firebird as collateral), and started in scallops and mahogany quahogs. Maine’s sea urchin fishery was on the rise, thanks to a Japanese market for urchin roe, so Porter fished for that, too, and got into lobstering.

“Once I got rolling, I just kept building up,” he says.

Today, although he hasn’t fished for mahogany quahogs for a few years, he maintains a routine of fishing for lobster through the summer and switching to the state’s scallop fishery when that opens in early December. Come spring, he and other Maine fishermen motor to Gloucester, Mass., to drag for scallops in federal waters.

Porter got into fishery politics early on. He was on the Maine Fishermen’s Forum board of directors for 22 years, serving as president for ten. (He gave that up once elected as MLA president.)

The forum is one of the best things for the fisheries, he says. Founded in 1975, it features three days of education and communication for fishermen and fishery stakeholders. Mainly it’s a great opportunity for everyone to get together.

“A lot of stuff has been figured out in those halls, or down at the restaurant,” he says.

Changes were happening in state and federal fisheries, as the industry and regulators began seeing greater need to protect fishing resources—like groundfish, urchins, scallops, and shrimp—from depletion. Then, too, there was growing concern about endangered North Atlantic right whales and other large whales whose lives are at risk when tangled in fixed fishing gear like lobster trap lines.

Numerous measures have been implemented over the years to address these concerns. Maine’s scallop resource is an example of the success of measures like conservation closures; the state recently announced the first new entrants into the scallop fishery since 2009.

“So far, so good,” says Porter. “It’s on the right track. There are still areas that need some improvement, but a lot of areas have come back.”

Although many fisheries are in flux, the lobster resource has boomed: Landings are more than triple what they were in the early 1990s, and the value shot from $61 million in 1990 to $484 million in 2018. But today, the lobster fishery faces two near-existential issues: “Whales and bait,” says Porter. “Anything else is noise.” 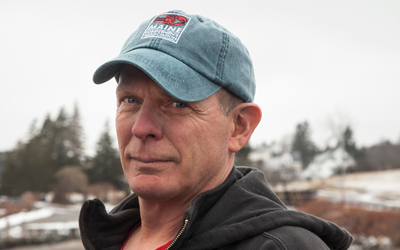 An increase of North Atlantic right whale entanglements in fixed fishing gear in 2017 and 2018 resulted in deaths and injury in the endangered population. Maine’s lobster industry has been proactive in implementing measures to reduce entanglements, and none of the gear in the incidents was identified as coming from Maine. Still, the incidents triggered a provision in the U.S. Endangered Species Act that reinstates the consideration of human impacts on the animal. Called a “biological opinion,” it could result in new federal restrictions on the fishery.

The Atlantic Large Whale Take Reduction Team has been studying measures that include new methods to reduce the breaking strength of vertical end lines to 1,700 pounds, and ropeless fishing, which would implement acoustic technology to trigger deployment of a buoyancy device, lifting the trap to the surface.

Porter has spent years with other stakeholders developing gear modifications to reduce entanglement risk. Initiatives today include an industry, state, and academic collaboration on the question of the breaking strength of rope strength.

“There’s this magic number of 1,700 pounds of breaking strength,” Porter says. “If we find that Maine is already at the goal, does that mean they move the goal posts?”

Ropeless fishing technology is nowhere near feasible, he says.

“I don’t think people comprehend how dangerous and complicated it is,” he says. “It sounds easy—just go out and throw your gear over, and then when you want it, you pop it back up. But how do I know where your gear is and how do you know where mine is? How does somebody with the mobile gear fleet know where anybody’s gear is? If we can’t buy this stuff off the shelf, how are we going to do this?”

Other issues facing the lobster fishery include climate change and profitability, he notes. But overall, he’s optimistic. Even if landings decline, he says, “I think we’re still in a good place. I don’t know many people who say 130 million pounds is the new normal. If we drop back to 100 or to 90 million pounds, maybe we can build the markets and make it up on price. We have to be able to roll with the punches. But when I’m on the water, I don’t see anything that keeps me up at night.”

Laurie Schreiber is a freelance writer who covers fisheries and other issues for The Working Waterfront, The Fishermen’s Voice, Maine Boats, Homes & Harbors, and Maine Biz. She lives on Mount Desert Island. 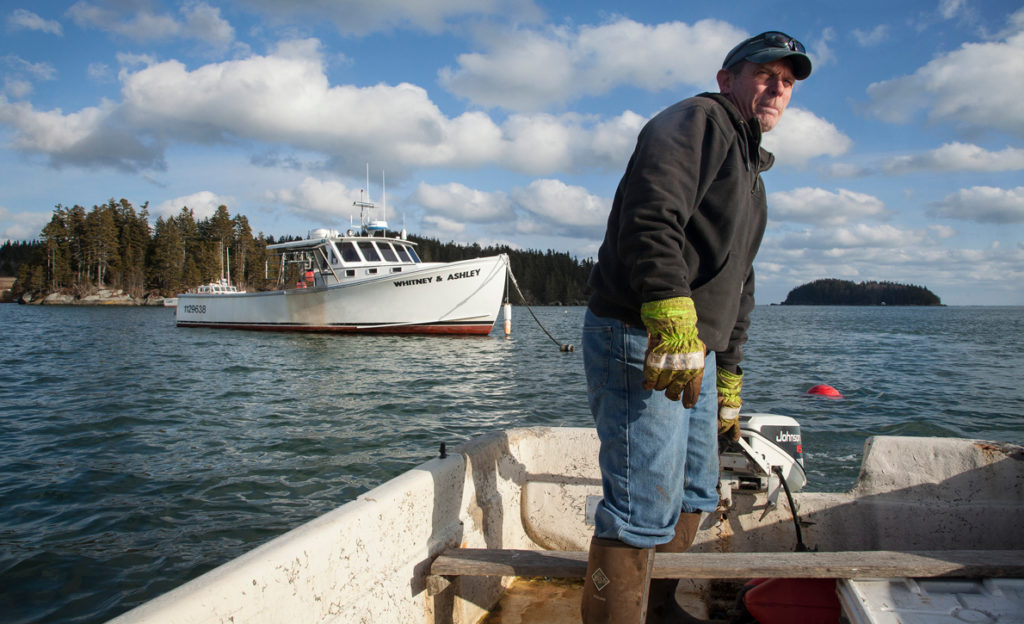 Kristan Porter heads out to one of his two boats.