Abby Proctor greets her customers at the Vinalhaven flea market with a bright smile and a friendly demeanor. She is soft-spoken and easy-going as she makes change and describes her freshly made pesto. For now, Proctor, 25, is the reluctant face of King Tide Farm.

“It’s very intimidating to be known as the farmer,” said Proctor. “I don’t want to disappoint people.”

Proctor, and her partner Will Calkins, 29, have taken over what was formerly known as Sparkplug Farm. Its owners left the island to pursue farming on a larger scale, leaving behind a very large, faithful customer base. Calkins is currently working as a lobsterman, leaving Proctor to bring their offerings to market on her own, at least for the time being.

When Calkins’ parents retired to Vinalhaven from Wisconsin, he decided to follow and give lobstering a try. About a year later he met Proctor and she joined him on the island. While farming was always something Calkins wanted to do, there were the obstacles of start-up costs, finding land and finding a market.

“It’s hard to find the right combination,” said Calkins. “It’s a common problem.” He decided to go work as a sternman for a while to try to save some money to that end. 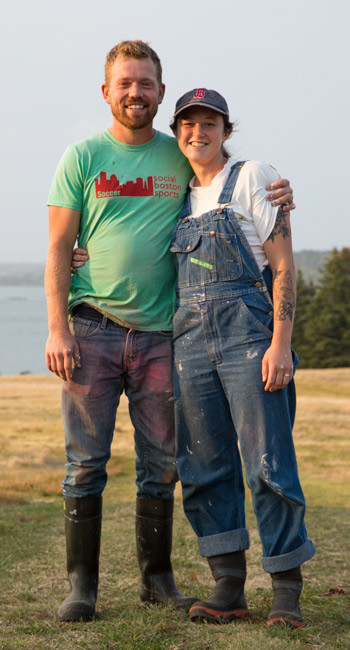 Both Proctor and Calkins have farming experience. Proctor grew up in southern Maine and lived on a small farm as a child, in addition to working three years at O’Donal’s nursery in Scarborough. Calkins grew up in Wisconsin where he worked on a tobacco farm in high school, and spent later years working in urban farming and doing a rural community supported agriculture apprenticeship.

When Calkins saw the advertisement looking for someone to take over Sparkplug Farm, he couldn’t believe that the opening hadn’t been filled.

“I was surprised at the opportunity,” he said. “I have been in communities where people are learning to farm and are looking for opportunities like this.”

In naming their venture, the two farmers produced a long list of possibilities. However, it was when Calkins read an article about all the things that show up on a beach unexpectedly after a king tide that something clicked.

“We liked the way it sounded,” he said. “We enjoyed the metaphor that this path was presented to us unexpectedly, bringing new things to the surface for us and for the island.”

Proctor and Calkins chose to take their first year of farming slowly. When June came and went, “I wasn’t even sure we were going to get anything out this year,” said Calkins. However, the pair decided to try some quick crops, including lettuce and basil. They also acquired some laying hens.

“They won’t last much longer,” said Calkins. “We got them just so we could come to market with more than lettuce.” However, the couple are currently raising 102 chicks for next season, as they have learned that fresh eggs are a hot commodity in the community.

Both farmers consider their first season a success,

“It’s been such a good experience that we were so small,” said Proctor. “Now we know how it works. Knowing what we know now, I’m very happy we didn’t do a very big season. I have a lot of confidence that what we have gathered this year will help us going into next,” she said.

“The most fun part of the job is problem solving,” said Calkins. “We’re making a lot of mistakes in a fun way, on a small scale, and solving them before there are big consequences.”

Going forward, they are confident in their abilities to bring fresh produce to a community waiting patiently, yet eagerly.

“Next year I’m not afraid to go as big as we can handle, because people will be waiting,” said Proctor. “We wouldn’t be able to do this if people here didn’t want it.” Goals for next year include continuing to grow lettuce and basil, and adding tomatoes, garlic and rhubarb, among other things.

“We want to grow at a pace we can handle,” added Calkins. “We’re excited for next year.” Beyond that, it’s hard for Calkins to predict what the future will bring for King Tide Farm.

“There’s so much to do in the moment and the near future, we don’t get a chance to step back and think about the next five years,” he said. “We both love it here. We don’t have any intention of leaving the island. We both love the idea of it being home.” 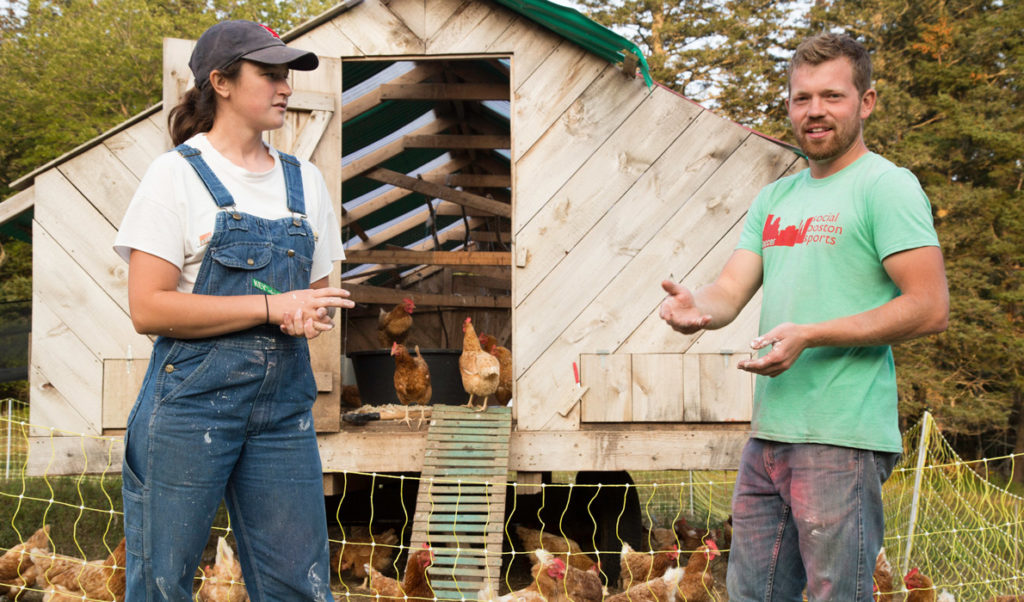 Will Calkins and Abby Proctor at King Tide Farm