When ferries and private boats fail to deliver, islanders turned to Kevin Waters and his company Penobscot Island Air to get to the mainland or back home. And after Waters’ untimely death of a heart attack at age 62 on July 5, islanders turned to each other to share their grief. Because Waters was much more than a lifeline—he was a friend.

Peter Ralston, co-founder of the Island Institute, and a close friend of Waters, said it was Waters alone who could lay claim to the moniker “honorary islander.”

“We connected when islanders called because the previous owner had cut-off service to the islands at Christmas time,” Ralston remembered. “I met with Kevin, and the Institute committed to helping him take over the air service. Those plans flew on commitment, loyalty, and love for the islands.”

“He was such a good, good human being,” he said. “I so respected the guy. His heart was bigger than the bay.”

Penobscot Island Air staff said the company would continue to serve the islands, “Because that is what Kevin would have wanted.”

In a short video that can be found on YouTube, Waters talks about his business, saying it’s not like being a “bus driver, taking people from here to there. You become entwined. It’s the good, the bad, it’s the weddings, it’s the funerals… These islanders do become family.”

That sentiment was echoed back to Waters after his death, especially on social media.

“We all loved Kevin. He held our community and all island communities together. He made each and every one of us feel special and he truly loved what he did. He was top notch and one of a kind with a heart of gold.”

Deborah Ross on the same page asked: “How about a t-shirt or button pins that says, ‘Be like Kevin.’”

Kris Davidson, on a North Haven Facebook page, wrote: “Kevin was such a dear man who always went out of his way to help people. Penobscot Air is a gift to the islands and so was Kevin.”

Norwood Beveridge described Waters as “a wonderful guy, friendly and professional,” while Lindsay Beverage wrote, “Kevin always went out of his way to be helpful and he bailed me out of a pinch more than once. He was an angel on earth…”

Craig Olson of Islesboro remembered Waters visiting the island to talk about the business, “and how he felt such an obligation to the island communities and how much they had enriched his life.” Olson was “struck by how very humble and positive he was.”

Klas D. Romberg on the Matinicus Facebook page wrote: “Kevin, I did not know at the time that our last handshake just a few short weeks ago was to be our last one. You are leaving a proud legacy of a rare achievement and the memory of benevolence in all who had the good fortune to be in contact with you.”

“The passing of Kevin Waters … has hit everyone on the islands and in places far beyond like a gut punch. Kevin is as close to a saint as people living on earth can approach and we all will feel his loss deeply.”

Pingree described him managing “a complex transportation service, often on a shoestring and with plenty of personal sacrifice. He rarely said no to anything anyone needed—from getting a critical part for a fishing boat engine to the island quickly, to making an emergency trip to the hospital in the middle of the night,” she wrote.

“We had a lot of conversations, too. He always started with a sweet and friendly word, often coupled with real concern about how ‘you were holding up.’ It wasn’t unusual to be speaking with Kevin about a sticky issue and see his eyes well up and hear his voice crack—his passion and love for his business and the customers he served was so deep,” Pingree wrote.

“Now I am the one who feels choked up with tears in my eyes and I know I will be joined by many, many others.”

A celebration of Waters’ life will be held at Knox County Regional Airport, Down East Air Hangar, at 11 a.m., Sunday, July 19. All are welcome. 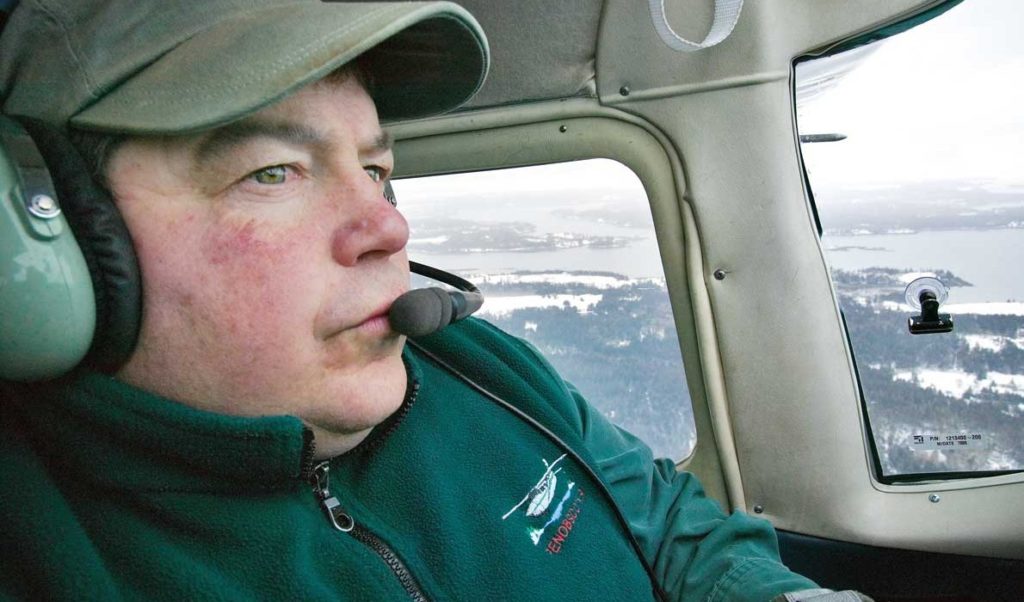