“Blue carbon” is a term you might be hearing more often. It refers to marine vegetation that has an inherent ability to sequester carbon and mitigate the consequences of carbon dioxide (CO2) emissions.

Vegetated coastal habitats including seagrass meadows, mangrove forests and tidal marshes were the first to be labeled as blue carbon. These marine photosynthesizers take up CO2 from the surrounding seawater and sequester carbon in the plants and the sediments below them, similar to terrestrial forests, but far more effectively.

Organizations like the Ocean Foundation are working on putting a dollar value on blue carbon in the form of acres of seagrass restoration or protection needed to offset a given amount of CO2. For example, using the Ocean Foundation’s “SeaGrass Grow Blue Carbon Offset Calculator,” an individual with one home and a moderate travel schedule generates approximately 22 tons of CO2 per year, costing just under $500 to offset through acres of seagrass. The blue carbon offset is determined by an ecological model that is continually being refined with the best available science in this emerging field of study.

People are starting to talk about macroalgae, or seaweeds like kelp, as a potential booming source of blue carbon due to their high growth rates. The kicker with kelp is that it naturally grows on rocky substrates, where burial of carbon is not possible. However, carbon sequestered in the seaweed’s tissue could be considered an offset if the seaweed was harvested to produce biofuel, replacing fossil fuel.

Where kelp may play another role is in remediating local ocean acidification. While acidification has negative impacts on most marine species, it turns out that many seaweeds actually do better under high CO2 conditions associated with acidification.

“Kelp removes excess nitrogen, phosphorous and carbon dioxide, which are three nutrients we have too much of in some of our bays,” Dobbins noted.

And the idea is catching on.

In Washington State, where ocean acidification has been implicated in devastating crashes in oyster populations, the Puget Sound Restoration Fund in conjunction with NOAA and other partners recently received a $1.5 million dollar grant to see if growing kelp in Hood Canal can help mitigate ocean acidification.

“The investigation involves top-notch scientists from NOAA and the University of Washington,” said Betsy Peabody, executive director of Puget Sound Restoration Fund and one of the principal investigators on the project. Those scientists, she said, “will assess the effect of kelp cultivation on chemistry and biology and determine whether cultivation systems can improve seawater conditions locally, and thereby give marine species a helping hand.”

Kelp cultivation technology developed by Dobbins at Ocean Approved is being employed in the project.

Here in Maine, the study commission on ocean acidification in its January 2015 report to the legislature recommended action to “preserve, enhance and manage a sustainable harvest of kelp, rockweed, and native algae and preserve and enhance eelgrass beds” to increase the state’s capacity to mitigate and adapt to the impacts of ocean acidification.

Dr. Nichole Price, a senior research scientist at Bigelow Laboratory for Ocean Sciences in East Boothbay, and her colleagues are investigating the benefits of both seagrasses and macroalgae in remediating ocean acidification. Thus far, Price’s lab has studied eelgrass and three species of seaweed that have commercial value in Maine to determine which are most effective at remediating acidification in a lab setting. Price, along with Jeremy Bell at the Nature Conservancy, Hilary Neckles at USGS, and Mike Doan at Friends of Casco Bay are doing field work in Casco Bay to test how effective eelgrass beds are at improving water chemistry for clams.

Next on the docket are plans to work with the Island Institute (publisher of The Working Waterfront) to deploy ocean acidification monitoring equipment at an Ocean Approved kelp farm off of Chebeague Island this winter.

“We hope to learn the spatial extent and constancy of the phytoremediation halo developing around a sugar kelp farm where calcification potential can be improved by raising pH for nearby shellfish farms and wild populations sensitive to ocean acidification,” says Price.

While we are not yet able to receive carbon credits for enhancing blue carbon in Maine, these marine photosynthesizers are well worth preserving and expanding for their other critical ecological functions.

Identifying and recognizing the value of these ecosystem services can be beneficial to further motivate the protection and restoration of these important marine species, particularly eelgrass beds, which are declining rapidly in Maine.

Kelp farming has the added benefits of providing sustainable marine livelihoods for coastal Maine residents and the production of nutritious, local food. Kelp is the new kale, after all, so at least until we are getting carbon credits for it, let’s eat it.

Dr. Heather Deese is an oceanographer and the Island Institute’s vice-president for strategic development. Dr. Susie Arnold is an ecologist and marine scientist with the organization and serves on the state ocean acidification commission. 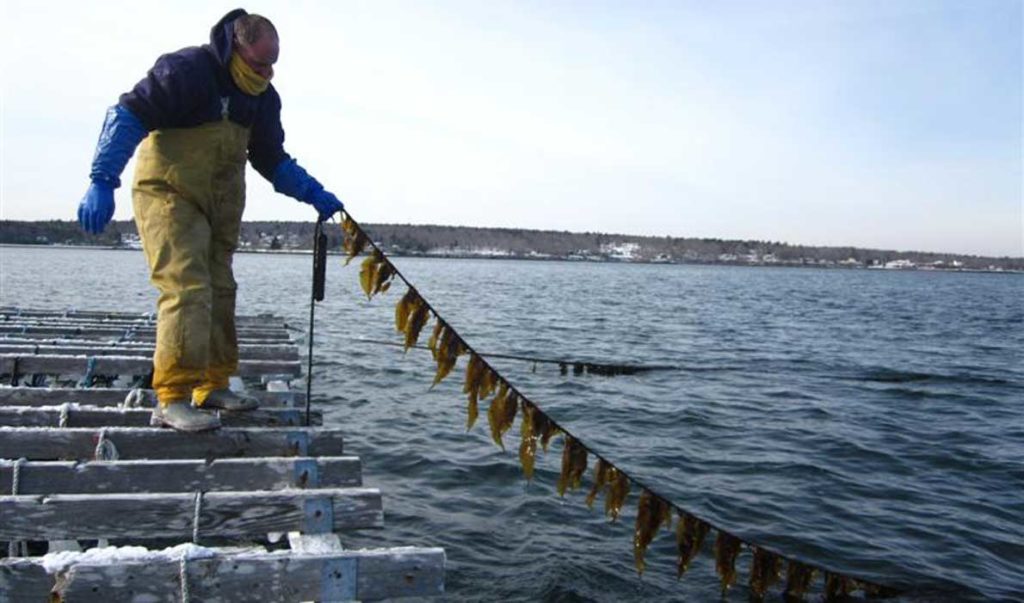