The nonprofit land conservation organization Maine Coast Heritage Trust is well on its way to raising $125 million in its “Keep the Coast Maine” campaign, aiming to protect and add public access to the shore, while also preparing for threats to the coast from climate change.

MCHT President Tom Glidden said the campaign had raised more than $100 million by the end of 2018.

Among the benefits to communities in which coastal access is being conserved, he said, is securing through acquisition long-trodden paths to clam and worm flats. Campaign funds also will pay to purchase waterfront access for fishermen.

“It was clear that in order to continue the work that we have done for the past 50 years we would need to harness a lot more money,” Glidden said.He said threats to the Maine coast include rising sea levels and a growing interest in living in Maine as temperatures continue to rise in other parts of the country.

“Maine’s lands and waters are the lifeblood of our coastal communities, and they are threatened by forces never before seen in Maine’s history,” Glidden said.Maine’s 3,500-mile coast continues to be the fastest developing part of the state.

Glidden said MCHT would like to ensure that every coastal town has public access to the water.

“With only one percent of the shoreline offering guaranteed public water access points for commercial and recreational use, all who live, work, and play here are already feeling the crunch,” he said.

Some, however, argue efforts to conserve land can be excessive and raise property taxes for local residents by taking too much property off the tax rolls.

Jacob Posik, spokesman for The Maine Heritage Policy Center in Portland, said more than 10 percent of the state’s land is in conservation. He said land should be conserved through easement only, which ensures the property remains on the tax rolls.

And, he said, stopping land from being developed only should only occur when the economic benefits of conservation outweigh the negative effects incurred by a municipality as a result of lost tax revenues.

“Some municipalities in Maine, particularly those in rural areas of the state, feel the squeeze when they no longer receive, or only receive a portion of the property tax revenues from large sections of lands that were previously on their tax rolls but are now in conservation,” Posik said.

Others say the numbers tell a different story.

The legislature’s Agriculture, Conservation and Forestry Committee issued a report in March 2018 stating that non-profit conservation groups, including land trusts, hold about 2.5 million acres in Maine, through both direct ownership and easements. Nearly all of this land—94.5 percent—is on the tax rolls. The owners make payments in lieu of taxes on another 4 percent of this conserved land.

Beyond these monetary payments, conservation groups contribute to Maine in ways that are harder to quantify, the committee said in its report. Miles of hiking, biking, ATV, and snowmobile trails draw visitors who spend money in Maine.

Eighty-five percent of Maine’s conserved land is working forest, which means it supports loggers, truckers, mill workers, and others.

Glidden said among other projects MCHT has undertaken to help public access is arranging for the acquisition of a piece of property in Lubecto give boaters and fishermen a place to land when using a planned safer harbor.MCHT also has carried out a number of clamming access projects along the coast, trails that have been used informally for generations.

One piece of land between Cutler and Lubec had been used by lobstermen for a number of years to launch and pull larger boats out of the water.

“This place has been used informally but was on the market,” said Glidden. “We saw an opportunity to stabilize that. We’re in the process of putting in a little parking lot.”

It was MCHT that purchased a four-acre parcel in downtown Milbridge for community gardens, a walking track, and gathering space.The organization was approached by the Women’s Health Resource Library in town.

“We will own it and take care of the basics,” Glidden said. “They do all the programming.” He said MCHT has one more year to meet its $125 million goal, and added that“2019 is going to be a busy year.”

Since it was founded in 1970, MCHT has conserved more than 150,000 acres in Maine, including more than 300 coastal islands. The organization owns and manages more than 120 preserves from Kittery to Lubec that are open to the public at no charge. 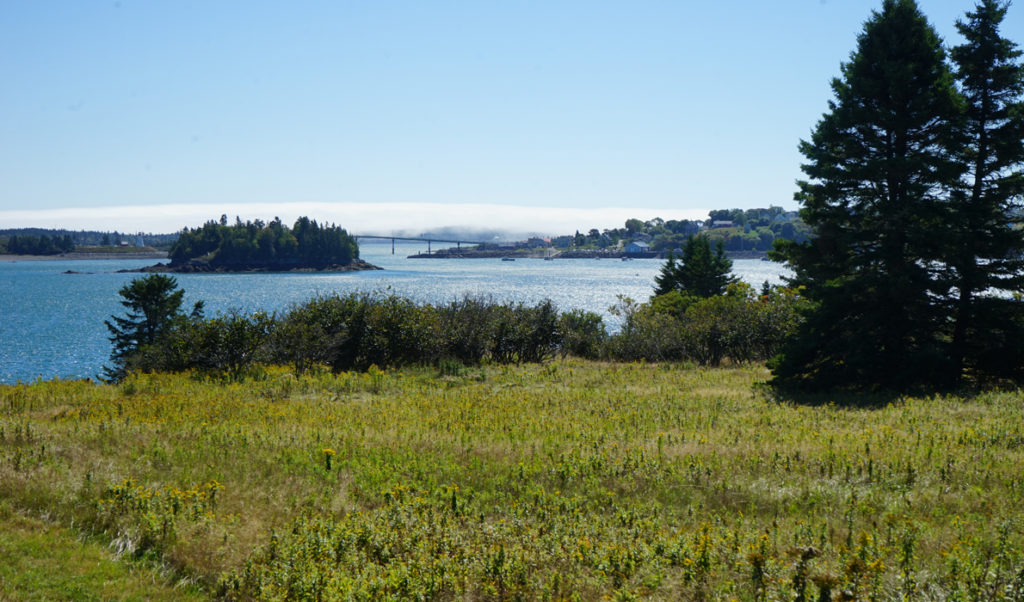 The view from Treat Island in Passamaquoddy Bay