When a knee issue went from sporadic to constant in February, my doctor suggested physical therapy. One-hour appointments two days a week don’t sound unreasonable, but scheduling them when you live across the water is one of the banes of island living.

My PT appointments were on Mount Desert Island, so ideally I could leave on the 8:15 ferry, arrive in N.E. Harbor by 8:45, walk to the parking lot, get in my car and drive to Somesville in time for a 9 a.m. appointment. I then had an hour before the 11 a.m. boat back to do errands and arrive home by noon, which allowed me to still manage a half day of work at home.

The 9 a.m. slot is a popular one, which I only managed to snag twice.

“Yeah, all the island people want that one, I wish we could do more,” said Sherry at the other end of the phone when I set up my appointments. Once the Beal & Bunker ferry switched to the off-season schedule, the 1 p.m. appointment became the next-most coveted time for islanders. One could leave the island at 11:30 a.m., do a couple things in Northeast Harbor, attend PT and return on the 2:30 p.m. boat, without losing all of a work day on the island. I managed to arrange a few of those, too, so I won’t bemoan the other times when I had to spend two full days a week off island. The PT has helped in more ways than one.

When I worked my way up to lifting ankle weights, I ordered them from Amazon. (“You have Amazon Prime out here?” marveled a Washington Post journalist who recently visited us. Amazon Prime is an islander’s best friend and I would bet money that more people have it than not, out here in the Cranberry Isles.) Denise, my therapist, suggested I get a couple different sized playground balls to hold between my ankles to keep them even as I lifted.

“They work better when some of the air is let out. I think they still have them at the One Stop. You just need one of those little needles to deflate them partway.”

“I know I have one of those needles in my junk drawer,” I told her. I bought the two balls and had time to catch the 2:30 p.m. boat.

At my next appointment, I rode for a mile on the stationary bike, chatting with Denise. I told her of my attempts to locate the needle in the junk drawer. “Don’t come in the kitchen!” I had told Bruce as I spread on the floor around me items like extension cords, spare parts to the Mosquito Magnet now defunct, light switches with corresponding screws, shoe laces, loose thumbtacks, jars of nails, pliers, a hammer, screw drivers and such. I gave up on the needle before I got to the bottom of the drawer because Bruce said he was pretty sure he had one in his shop. Even though I threw out a couple handfuls of stuff, I still had trouble getting the rest back into the drawer.

Denise and I laughed about the universal connotation of the term “junk drawer.” Doesn’t everyone have one of these in their home? A disorganized holding space for little things you don’t want to lose and may someday need.

In the island summer house where I spent three weeks every year as a child, there is a small room that serves this purpose. In it are two tool boxes, built by my great grandfather. One has remained fairly neat and the other is a mishmash of wire, nails, loose tools, lead sinkers, fishing lines and hinges. Hanging on hooks are raincoats, sou’westers and life jackets, left behind by generations of families with growing children, available to the next little ones who come along. A shelf holds many years-worth of insect repellants.

With five families sharing the house at different times during the summer, we all seem reluctant to throw anything out. What if someone else is counting on it being there when they return?

That same shelf holds flashlights and batteries, badminton racquets, balsa-wood gliders and mysterious jars of turpentine and who knows what else. The rubbery aroma of that room with its cyprus door and window trim is the perfume of my childhood dreams. To walk through that room, with suitcases in hand, and three full weeks of island life in front of me is right up there with several of the best feelings of my life.

I don’t summer in that house now, but I can find that happy, Oh-I-forgot-I-left-this-here feeling in my own garden. The perennials that have spread quietly during the winter, the lettuces and other annuals that have re-seeded themselves and survived, are wonders just waiting to be rediscovered and transplanted. Rose campion, mint and chives along with whatever garlic I forgot to harvest fill me with delight when they show up in a place other than where I thought left them.

June is a junk drawer time of year, and I love it. Like any junk drawer it seems to offer a bottomless pit of potential for all the things you left here last year and hope to rediscover. Happy island summer to us all! 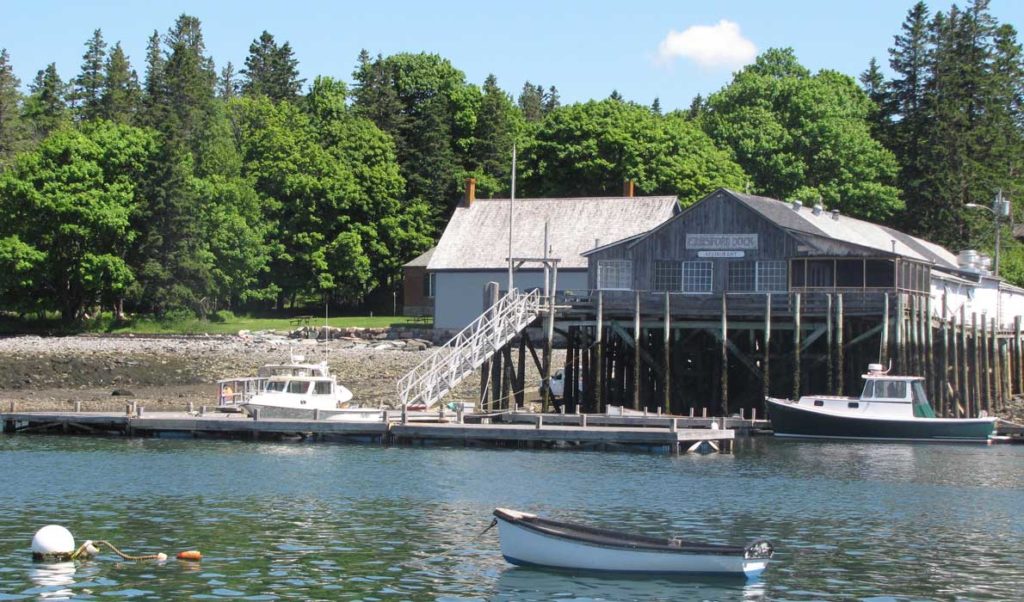