Ten years ago, Joe McBrine was visiting a sportsmen’s show in Orono. As someone who’s always liked to draw, paint, and make things, he enjoyed viewing the carved birds and duck decoys many woodcarvers had on display.

“But a guy had some fish, and I’d never seen fish done before. I said, ‘I’m going to go home and try that,’” he recalled. That first year, he worked hard to learn the craft, calling other carvers for tips when he needed help. By the end of the year, McBrine  had won top carving prizes in Maine and New Brunswick. He’s been at it since, taking commissions and showing at galleries around the state, including the Island Institute’s Archipelago gallery in Rockland.

McBrine has a dozen carvings in process in his East Machias home shop, all featuring exquisite detail, in his basement workshop. That includes birds and fish—cod, alewives, brown trout, brook trout, bluegill, a dark-phase Atlantic salmon caught on the Miramichi River in New Brunswick, and an Atlantic salmon caught in 1981 at Great Falls on the Machias River.

“The guy who caught it was a retired game warden,” McBrine said. “He passed away a year ago. His grandson had photos of the fish and wanted me to carve it so he had it to remember his grandfather by.”

“The dark salmon are hard to paint because there are so many colors in them,” he said, pointing out the shimmering silver, copper, and ruddy hues, with speckles of silver and black.

The scales are another trick.

“I made some punches the shape of the scale, and you can just tap it. I also tried making my own tips for the wood burner, but I found you’ve got to be super careful or they go too deep and then it doesn’t look right. You’ve got to have some texture, but not too much.” 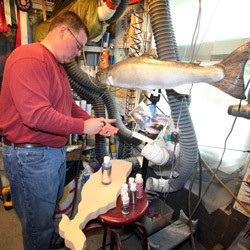 Joe McBrine at work in his shop.

Carving is actually McBrine’s hobby. As a game warden with the Maine Department of Inland Fisheries and Wildlife, he knows these animals first-hand.

Born in Presque Isle, he went to the University of Maine at Machias to earn an outdoor recreation management degree. While there, he worked as a deputy game warden for IFW, and was hired full-time when he graduated in 1995.

“It’s a law enforcement position,” he explained. “A lot of people think of it as an animal job, and it is. But we’re dealing with people recreating in the outdoors—hunting, fishing, trapping, and all kind of boating, so really it’s about people.”

Another important aspect of the job is search and recue.

“That’s rewarding,” he said. A recent incident involved two lost children, ages 4 and 6, who wandered into the woods from their yard. Multiple agencies and civilians formed a perimeter, using paved roads, ATV trails, and logging roads. Fortunately, the kids were found within an hour.

“To be able to bring them back to the parents—that can’t be beat,” he said.

The conservation violations the agency deals with are there for a reason, he said.

“The fish and wildfire resources could be harmed fairly quickly if we weren’t enforcing daily bag limits or people night hunting or baiting deer,” he said. “Maine has some of the premier brook trout fishing, and those wild brook trout populations need to be protected. Take a year like last year, when it got really dry and a lot of streams were virtually dried up. The trout were congregated in just a few deep pools. The predators are taking advantage of that, and some people are tempted to go in and take way over their limit. It’s like fishing out of a barrel at that point.”

The public is helpful with tips, he said. McBrine and another warden received a tip that some fishermen came to the area every year and took as many wild brook trout as they could. Out of sight, the wardens watched the men fish, counting the catch.

“When they got done, we checked them and they said they only had their limit, and they showed us their creels,” he said. “But we had seen them put brook trout in Ziploc bags, and they had the extra trout hidden. They ended up being more than double over their limit.”

Education and outreach are key to solving these problems, he said.

“When I came to work Washington County, it was still kind of known as the poaching capital of Maine,” he said. “But we’ve worked hard to educate people. I think there are still pockets of poaching, but overall I think it’s improved.”

The agency increasingly deals with drug issues, he said. “A lot of people out night hunting and doing other illegal things are also abusing prescription drugs and things like that. So you’ve got to be prepared to deal with a wide range of issues.” 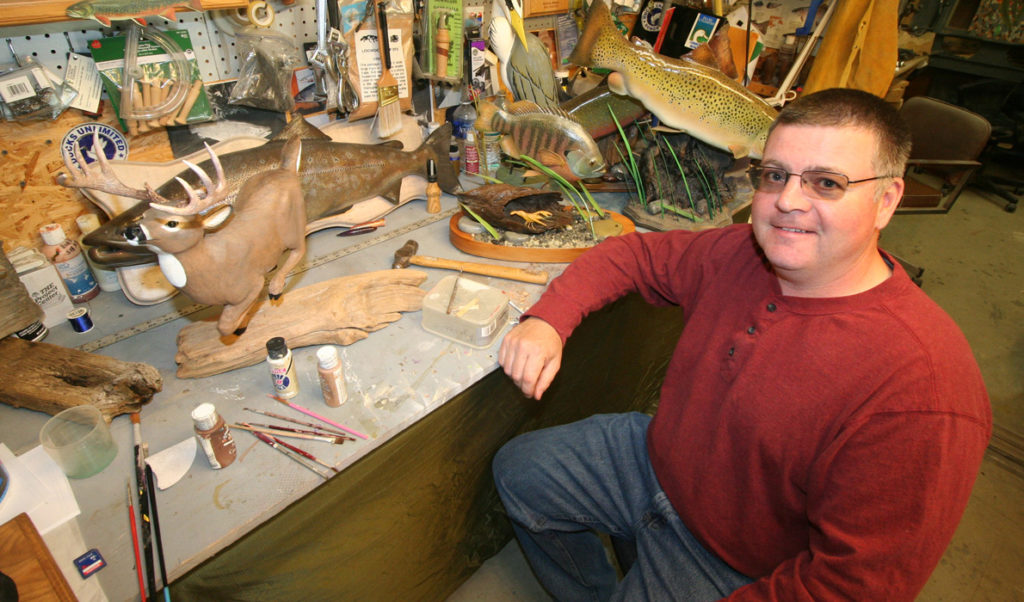 Joe McBrine poses with some of his work.