As far as I’m concerned, every map is a treasure map.

In our first years in Maine, there were many Saturday mornings in which I’d pore over the Maine Atlas and Gazetteer, scoping out a minor road that might offer views of a bay or ocean. Later, I collected hand-drawn maps of favorite places like Deer Isle, coastal Washington County, and the Casco Bay islands. And that’s not to mention nautical charts, through which I could imagine long paddles in my kayak.

The treasure that lies in a good map, it seems to me, is the discovery of Maine’s coastal beauty.

Jane Crosen’s maps back me up in this assertion. I’ve been a fan of her work for years, and have some of her maps hanging on the walls of my home.

But her latest work takes the two-dimensional nature of a traditional map and infuses it with history, economics, and culture.

Crosen, 66, who lives in Penobscot with her husband, has resurrected a Hancock County atlas from 1881, and with that solid foundation, created a book that anyone who loves this stretch of coastal Maine could be lost in for hours.

“It ended up becoming, for me, a rediscovery of Hancock County history,” she says, a place in which she has lived, explored, studied, and documented in map and text for decades.

It warrants the 68 pages she devotes to her Coastwise Geographic Edition of Colby’s 1881 Atlas of Hancock County Maine.

There’s a wealth of material in the original—the maps show small black squares, indicating houses, with each owner’s name beside it from 1881; a brief history of its settlement; and a list of historically significant points, such as military batteries and forts.

In Gouldsborough (note the old spelling), what today is Corea Harbor is listed as Indian Harbor, and there are nine Youngs shown living along the shore; the family name persists there today.

But Crosen has added so much more. For example, on the pages devoted to Sedgwick and Brooklin, we read quotes from Samuel Wasson’s Survey of Hancock County, 1878, noting the “porgie factories, and two herring packing-houses” in Brooklin.

There are vintage photos, too, which Crosen painstakingly tracked down to match the towns and the era, with help from the Penobscot Marine Museum. And, from the original atlas, Crosen’s version includes what she calls the county’s “yellow 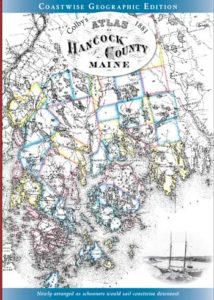 pages” from 1881, listing businesses. Sedgwick, we learn, had one harness dealer, a C.F. Herrick. Eden, now known as Bar Harbor, had one hotel, operated by T.S. Linscomb. (It’s likely there were more; the list is of “patrons,” suggesting only those who paid were included.)

Crosen’s professional background has prepared her well for the undertaking. Born in Bangor, but raised in Cumberland, her mother was an English teacher who pushed young Jane to write well.

“I remember her saying, ‘Oh Jane, that’s too flowery,’” about some passage. Her publisher’s note attests to what she learned about writing, as it colorfully provides context to both S.F. Colby’s original work, and how she has enhanced it. Among the improvements, she says, are a better layout of the maps and indexing antiquated place names with contemporary ones.

Crosen attended Brown University for a couple of years, then was drawn to Findhorn, a spiritual community in Scotland, where she lived for three years.

“I missed Maine,” she remembers. “I missed the landscape as much as anything,” and so returned, landing a job at DeLorme in Yarmouth, working as an assistant to founder David DeLorme. It was there, she recalls, “I figured out who I was, spreading my wings.”

From 1979 to 1981, she worked on an update to the iconic Maine Atlas and Gazetteer. One of her tasks was to list recreational areas, but she remembers DeLorme’s admonishment: “I could only put it in the gazetteer if I could figure out where to put the symbol” for boat ramp, park, or hiking trail.

Crosen then moved north, and began working part-time at WoodenBoat in Brooklin, the boatbuilding school and publisher of the magazine of the same name, along with a book imprint. Eventually, she took on full time work there as book copyeditor.

Hand-drawn maps and illustrations were added to her repertoire while working on the company’s Canoe magazine, and then creating end papers for cruising guides. Crosen further spread her wings in producing two-color poster maps of coastal Maine, and one-colored “stipple” maps.

“I kind of riffed off nautical charts,” she says of her approach then, and always, drew on several existing maps to be comprehensive.

In recent years, she’s been speaking to schools and adult groups about maps, explaining, particularly for children, how to read them. A popular activity in schools is “map sleuthing Downeast,” she says, a scavenger hunt-like exercise.

In a slideshow presentation at area libraries, she began using close-up details from the 1881 atlas. While visiting Charlie Ferden at Downeast Graphics & Printing in Ellsworth one day, he shared with Crosen a facsimile edition of the 1881 atlas he had printed 20 years earlier.

That triggered her to tackle the reproduction.

“What inspires me,” Crosen writes in the publisher’s note, “is our well-preserved Downeast landscape, where you can discover hidden remnants of Hancock County’s history, if you know where to look.” With this book in hand, you’ll know where to look.

Coastwise Geographic Edition of Colby’s 1881 Atlas of Hancock County Maine is available for purchase at mainemapmaker.com for $42.