Ask Mainers about their favorite season, and most would probably say it’s autumn. One of the reasons for that choice, some might say, is that most of the tourists have gone home and so traveling along Route 1 is easier, as is stepping out for a meal or a beer.

It’s time to share the splendors of a Maine autumn with our out-of-state friends.

Tourism, as most readers know, has emerged as one of the most important sectors of our state’s economy. It once was pulp, paper and other forest products, but Maine’s economy—like much of the U.S. economy—has fewer monolithic sectors and now is more dispersed and service-based.

If you live on or visit the coast during July and August, you know how busy our little downtowns get. Here in Rockland, busy working people can be seen weaving in and out of strolling visitors on the sidewalk to get to a coffee shop and back to the office. Traffic backs up in places like Wiscasset and Camden. Figures recently released by the Maine Office of Tourism bear out this anecdotal evidence.

Restaurants saw $1.1 billion in revenue in the period from May through August. That’s nearly a 5 percent increase over the same period last year. Lodging revenue was $559 million for those four months, up 7.8 percent over last year.

Both numbers are records, eclipsing the record set last year.

And there’s more good news. Overnight visitation in the May-August period was up 5 percent over last year.

Some of that spike can be explained by the inevitable higher prices, but probably more is attributable to the recovered economy. Americans are feeling more confident about their earnings, and so are beginning to travel again. It’s what economists call pent-up demand.

The tourism office has long worked to spread the wealth of summer tourism out, both away from the coast and over the calendar year. There is evidence that the effort to build the shoulder seasons is paying off: in the September-November period last year, visitation increased by nearly 13 percent over the same period in 2014.

Local booster groups could do more to help, and many are.

Most towns schedule their festivals in July and August. What about moving some to September, or even October, or creating fall-themed events? Boothbay just celebrated its 49th annual foliage festival, Southwest Harbor hosts an Oktoberfest, Portland has a “Harvest on the Harbor” and Lubec offers a fall festival that features Celtic music. The Maine Maritime Museum, Farnsworth Art Museum, Boothbay Railway Village and Damariscotta Pumpkinfest collaborated this fall to offer “Maine’s Pumpkin Trail.”

If these events are packed with fun activities, and are promoted in motels and restaurants during the summer onslaught, more shoulder-season tourist revenue can be had. Regional coordination among lodging properties and restaurants, offering discounts, could further entice visitors from southern New England to spend a long weekend on our coast.

Slower traveling on Route 1 and weaving down the sidewalk to get past the slowpokes is a small price to pay for a longer, more profitable tourism industry. 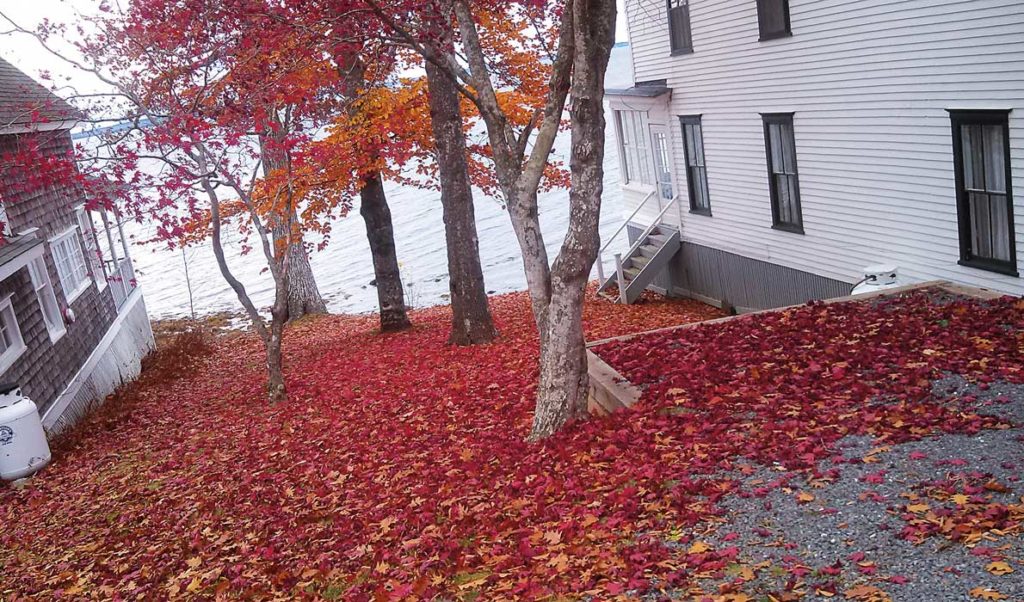 Fallen leaves pile up between two cottages in Bayside