The conversations that took place over four days in Scotland echoed conversations here in Maine’s island and coastal communities. The Highlands has a workforce housing crisis, broadband infrastructure is lacking, “depopulation” threatens its vitality, and its communities also are being undermined by a lack of local input into how the ocean is being developed.

Over the course of the week I learned that Scotland is doing something quite important for its island communities, and I believe it’s an idea we should consider replicating here in the U.S.

In 2018, the Scottish government adopted a national islands act. The act seeks to boost local control for island communities by moving decision making from national and regional bodies to the local level. The act creates a do-no-harm approach to Scottish governmental decision making; in effect, it creates a review that all legislation must pass to ensure that new rules and initiatives will not adversely impact island communities.

The act also requires the creation and occasional updating of a national islands plan that will direct resources to island communities. An important element of the act gives islands a clear role in permitting ocean-based development like energy and aquaculture within 12 miles of an island community.

I think this is “brilliant,” as they say in the U.K. Remember Maine’s statewide school consolidation initiative? It presented a nightmare of problems for island towns. The ongoing conflict between island communities and the Maine State Ferry Service provides reason enough for such a policy.

After 16 years of fighting against ill-conceived policies created in Washington D.C. and Augusta, it seems time to create a similar “islands act” here in Maine. If we establish it here, we can take our example to Congress as a model for a national plan.

One success that reflects this approach came a few years ago when the Island Institute and our partners in Hawaii, Alaska and the U.S. Virgin Islands worked with the Department of Energy to identify and designate “islanded regions” in the U.S. The idea was to recognize the unique needs of off-grid communities, whether they are surrounded by water or ice, to direct resources to them to help lower their energy costs.

The visit to Scotland netted us good ideas to bring back to Maine, but we also helped the Scottish islanders out a bit, too. The Maine Islands Coalition, a body the Island Institute helped form for island leaders to share ideas and concerns, and the Institute’s Island Fellows program, which places recent college grads on islands to do community service work, lit up people’s imaginations in Scotland. The government leaders in charge of developing the national islands plan took copious notes and intend to visit the Maine coast to learn more. It was clearly the beginning of a long and overdue conversation that I anticipate will run well in to the future.

The conversations that began in Scotland point a way forward that holds promise for our island communities in Maine and across the U.S. 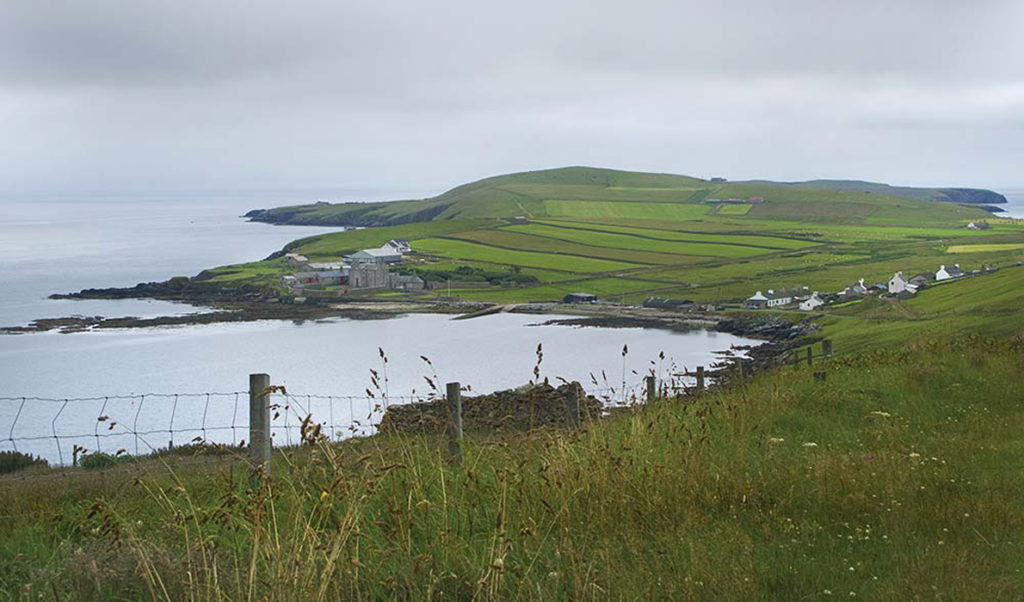 A scenic view of an island off Scotland.