High waters, whether from storm surge, rising sea levels or both, can cause costly damage to the coast. On islands, those high seas can have even more impact, damaging essential infrastructure and even leaving residences cut off from island resources and the mainland.

That’s why the state, through its Maine Coastal Program, has funded work on Islesboro and Chebeague Island assessing threats from those rising waters.

Last summer, Islesboro landed a $40,000 grant to examine the upper Penobscot Bay island’s vulnerability at its Grindle Point ferry landing area and at the area known as The Narrows, where a thin strip of land joins the northern and southern halves of the island.

Leila Pike, an engineer with Ransom, a consulting firm with offices in Portland, has been working with Islesboro, looking at historical data. NOAA (the National Oceanic and Atmospheric Administration) and the U.S. Army Corps of Engineers provide data on low, intermediate and high sea levels, she said, which is then analyzed for its impacts on the island. The numbers are further examined to consider the largest storm surge or high water over decades-long timeframes.

Grindle Point, near the mouth of Gilkey Harbor, is where the Maine State Ferry lands and leaves.

“It’s very exposed,” Pike observed, and when waves build from the south and west, the landing area could incur damage.

Even more vulnerable is The Narrows area.

During the full moon that coincided with Christmas, she said, the high tide “was very close to the road” on the west side of that area of the island.

“If that area were to get inundated,” Pike noted, residents north of The Narrows “would be cut off from the fire department, the airport, the school, the ferry,” she said.

The work will make some recommendations but stop short of designing remedies to higher waters in those two locations.

Giving the town some time to plan, Pike said, means it will be able to avoid what’s known as “reactionary engineering.” If a storm caused serious damage to The Narrows, she explained, the town might move quickly to rebuild the rip-rap when a more deliberative approach might lead officials to consider building a bridge.

The work aims to help the town consider “what kind of adaptation measures do they want to think about.”

Pike and her firm will present an update on the work to selectmen at their Jan. 21 meeting.

On Chebeague Island, which won a $10,000 grant, planning work will focus on its municipally-owned Stone Pier. The pier, built in the 19th century, is the island’s primary ferry landing, where the island-operated Chebeague Transportation Company boat lands. Commercial fishermen, recreational boaters, tourists and residents rely on the pier.

Town Administrator Marjorie Stratton said high water covers the pier about once a year. An alternative landing site or modifications to the pier will be considered.

Other potential impacts of sea level rise and extreme weather and flooding will be assessed. The island town is working with the Greater Portland Council of Governments and Maine Geological Society, with island planning board member Carol White representing the town.

A vulnerability assessment is expected to be complete by February, and public outreach meetings will follow. 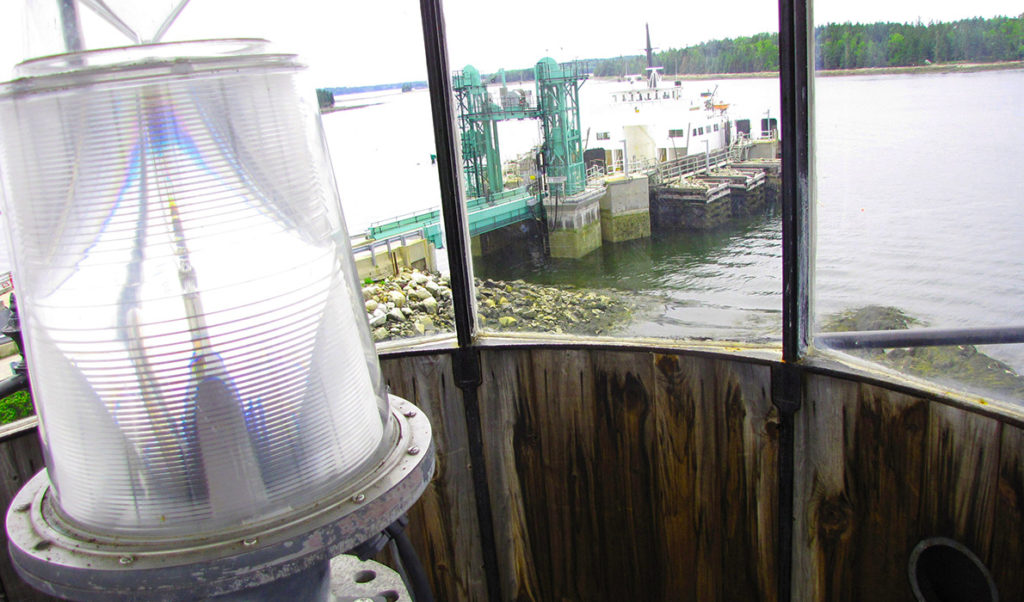 The Islesboro ferry as seen from the Grindle Point Lighthouse.