An earlier version of this story included a wrong first name.

ISLESBORO — At their annual town meeting on Saturday, May 30, residents overwhelmingly approved raising and spending $206,830 to begin the process of building a town-owned broadband Internet network.

The money will cover the first steps of the project, including design, utility pole site acquisition, technology consultation and legal fees. The cost of the full build-out is estimated to cost $3 million, less the $206,830 raised at the meeting.

A second town vote on securing the balance of the funds is expected to come later this year.

Earlier this year, the island town’s board of selectmen supported putting the entire $3 million, for which a 20-year bond is anticipated, on the town meeting warrant. Concerns about information dissemination on the plan led to the annual meeting being delayed from May 9 to May 30, and a scaling back of the funding request.

Several residents spoke in favor of the request and no one spoke against it.

Roger Heinen, a part-time island resident who served on the committee investigating the broadband plan, explained the arguments in favor of the investment.

“Increasingly, the Internet is an essential lifeline,” he said, a way that people stay in touch with family and friends, and a resource for education and business.

The island has Internet access, but the speeds of the service are less than desirable, proponents of the broadband plan have said.

Heinen said the minimum speed for adequate Internet service, as set by the Federal Communications Commission, is 25 megabits per second.

“Most of us are ten times worse than that federal minimum,” he said.

In addition, Heinen said new services will be offered over the Internet that will require much faster speeds, such TV streaming and other information.

Later, in answer to a question, Heinen said the plans for the rate of service means it will be “way over-built for 2015,” but likely adequate for 2045.

Currently, the island has “dark areas,” he said, where no Internet is available. The broadband plan calls for providing service to every island home and business.

Heinen acknowledged that the final price tag of $3 million, which includes contracting with GWI to provide and maintain the service, is steep.

“That’s a big, scary number,” he said, and the 20-year bond that is anticipated is a long-term commitment. But by owning the network, “We’ll have some influence … over pricing and service,” he said.

“This island has found itself on the wrong side of the digital divide,” Heinen said, and no private firm will rescue it. Without faster service, Islesboro will be “a less attractive place to buy a home,” he predicted.

Resident John Gorham said he wouldn’t benefit personally from faster Internet speeds, but saw the investment as important to the next generation, and in particular, for his son.

“He does a design consulting business on the computer that could not be done here on Islesboro,” Gorham said. “I look at this as a proposal for the young people of Islesboro.”

“My attempts are cumbersome,” he said, with interruptions to service frequent. Faster Internet would “help fuel independent businesses,” he said.

Resident Jan Harmon read a letter from phone and Internet provider Fairpoint, received by islanders earlier in the week, that promised 7-15 megabits per second for $30.99.

“Fairpoint is for profit,” Harmon said, while an Islesboro-owned Internet “is not looking for a profit,” which would keep costs down.

Allie Wood, a physician assistant at the island health center, said better Internet service could allow residents to use telemedicine services, consulting from the island with physicians on the mainland.

Residents opted to vote by a show of hands rather than written ballot. Those in favor numbered about 125; about a dozen voted against the measure.

In other business, residents:

Residents also approved spending $65,000 to fund the pre-school program. Advocates argued that private fundraising efforts had been inconsistent, and that families have come to rely on the service. 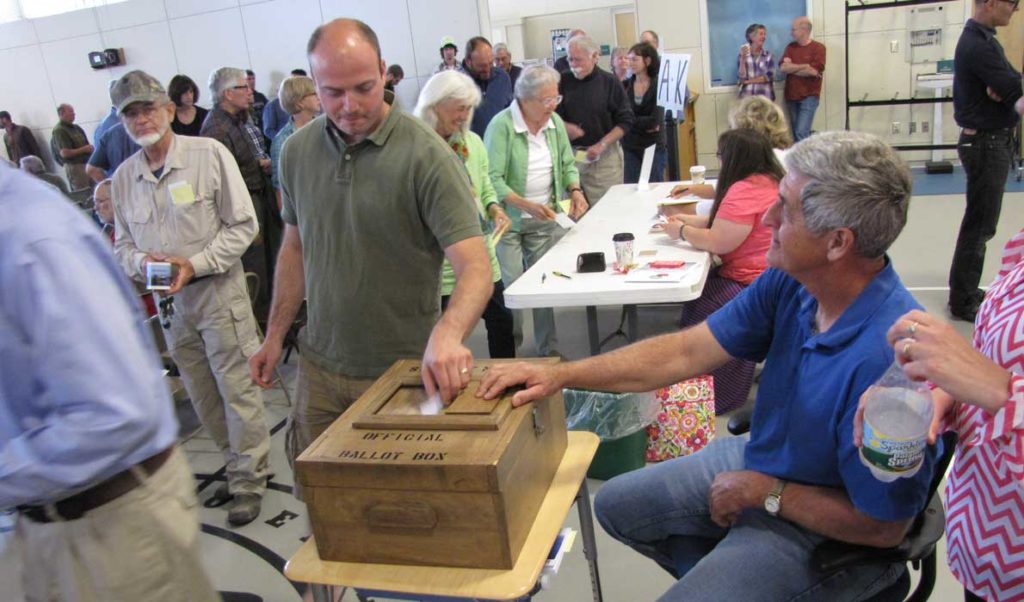