Living on an island fosters innovation. For the 50 or so year-round residents of Isle au Haut, innovation can look like using PVC pipe as a curtain rod because there are no real curtain rods at hand, or it can look like the future of the nation’s electrical grid

The 6-mile-long by 2-mile-wide island has been facing disruption of its electricity supply. So islanders, as they do every day, got creative. And in the process, integrated technology that’s been available for decades with emerging innovations to create what could be a renewable energy model for the rest of the U.S. and perhaps the world.

Isle au Haut gets electricity via underwater cable from the mainland, about 7 miles away. But that cable, painstakingly installed along the ocean floor in1983 by Parker Waite, a local diver, has surpassed its estimated lifespan by almost double and could fail at any time.

If the cable fails, the island can run its backup diesel generator, but that would triple the cost of electricity for residents, says Jim Wilson, the president of Isle au Haut Electric Power Company.

“It would be an economic disaster,” he says.

What’s more, using the diesel generator as the island’s main electricity source would also require more maintenance and is not climate-friendly.

Five years ago, knowing islanders were living on borrowed time, the electricity company board began researching options. Among them: creating a microgrid for the island, which would be independent from the mainland power utility company.

To go the microgrid route, they would have to be able to generate power on the island. For that, they considered microturbines, refrigerator-sized devices that burn fuel to generate electricity. They also looked at wind turbines and solar. A solar microgrid, says Wilson, penciled out at a fraction of the cost of all the other options, including replacing the cable.

So solar it was. With the support of islanders, the power company is getting ready to install a renewable microgrid energy system this summer, which includes a 300-kilowatt solar array of 900 panels.

Getting this project to the launch-point has been “an adventure,” Wilson says. When one tricky situation was solved, another one popped up.

Among the many challenges they faced was one everyone interested in converting to more renewable energy such as solar or wind has to tackle: storing intermittently produced energy for later use. One of the most common storage solutions are lithium-ion batteries, but they were not well suited for the island’s project for a number of reasons, including cost and anticipated lifespan.

The island’s solar-powered electrical microgrid will have one megawatt-hour of storage in supercapacitors housed in two, 20-foot-long containers resembling trailers. Kilowatt Labs is also providing a power management system housed in a 10-foot container that channels the power to and from the microgrid.

While the cable is still functioning, the island’s electricity company can sell that excess power to the utility company on the mainland. But once the cable fails, any electricity produced beyond what can be stored in the supercapacitors will be essentially wasted.

The solution? Installing air-to-water heat pump heating systems in residential, municipal, and commercial properties on the island to transform the excess electricity into hot water that can then be used to heat buildings, which are currently heated with a variety of sources ranging from wood to oil to kerosene.

No one expects that every property owner on the island will convert their heating systems to the heat pump/hot water tank system, says Molly Siegel, an Island Institute Island Fellow. The systems, Siegel says, are expected to cost around $9,000 installed, which is a steep outlay for most year-round islanders. But those who do can expect substantial savings in heating costs.

Accounting for the size of the building and how well it’s insulated, the heating pump/hot water system could cut a property owner’s heating costs by half, says Wilson. That puts the payback time on the upfront costs of the heat pump system between four and seven years.

THE ‘NEXT, NEXT’ GRID

How the microgrid is controlled is what makes Isle au Haut’s energy system the “next, next grid”—an algorithm-based computer program complemented by machine learning and artificial intelligence.

Created by Portland–based Introspective Systems, the software—which is also being considered for use in Europe and Africa—calculates the cost of electricity in real time so consumers can manage their energy choices.

That means, for example, the software figures out when it’s most cost-effective to heat a building using the air-to-water heat pump/hot water tank system or to use a building’s backup heat source, such as a kerosene-fueled monitor heater, then individual consumers, using a dashboard interface resembling a tablet computer, can select the option that makes the most sense for them. And they can do so knowing that their privacy is protected: The consumer’s energy management choices are not shared with the power company.

It’s pretty exciting stuff, Wilson says. “When this whole thing goes together, it’s going to be a very different system than we thought we would have when we started.”

How to pay for this new energy system and make it as affordable as possible for the electricity company and islanders has been another nut to crack, says Nicholas Filler, the power company’s vice president.

The $1.8 million project is being financed through a variety of sources including private investment, donations of materials, grants, and loans. But islanders will still feel quite a bite. The usage rate for electricity will remain the same at 32 cents a kilowatt-hour, Filler says, but each property owner will have to pay an assessment fee of up to $6,800 to help cover the costs of the project. Property owners will be given the option of paying the assessment all at once or through a 20-year payment plan.

Despite the additional costs to their household budgets, islanders have been supportive of the project, Wilson says. They recognize the need, for one thing, but also there are factors that take some of the sting out of the additional cost.

If property owners make the switch to the air-to-water heat pump/hot water storage system, the savings on their heating costs will soften the pinch of the increase to their electric bills, he says, And by going with solar panels and heat pumps, the island overall will greatly reduce its use of fossil fuels.

The innovative project has caught the attention of a number of industry-related organizations, including Efficiency Maine, an independent administrator of energy efficiency programs. Ian Burnes, director of strategic initiatives for Efficiency Maine, says the organization has agreed to provide more than $65,000 in grants to help support the project with the expectation that the data collected from the island will inform the organization’s future efforts.

“We are cautiously optimistic about this,” Burnes said. While he is not sure this type of project is right for every community, it could be a strong piece of the puzzle of how to integrate renewables into the electric system mix. “This has the potential of offering a lot of benefit.”

From Wilson’s perspective, there’s no doubt that what they’re doing on Isle au Haut has the potential to make a huge difference to communities on the mainland in Maine, and for the country as a whole.

“The implication is much, much broader than just for Isle au Haut,” he says. While it’s not a perfect solution, he acknowledges, it has “tremendous” applicability and “could be a very signification economic factor” for any place that heavily relies on fossil fuels.

Chip Seibert of Kilowatt Labs agrees. The energy industry tends to predict that solutions like Isle au Haut’s will only take shape in a decade or two, he says, leaving all of us, in the meantime, still reliant on fossil fuel-powered electricity generation.

“We have to have a plan that takes one baby step at time,” he says. “When you look at what the Isle au Haut is doing, that’s a really interesting baby step that actually is a pretty big leap in the scheme of things.” 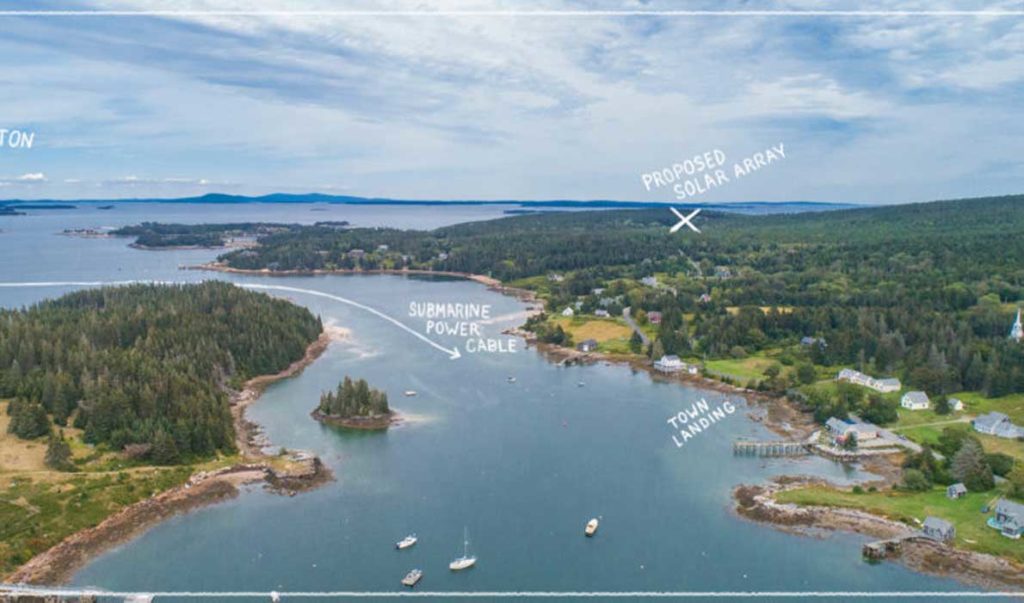