Maine and the country have seen amazing growth in the craft brewing business. This evolution began over 25 years ago, and there are now over 80 breweries in Maine. People appreciate a better tasting product and are willing to seek it out.

The brewing community is a passionate group that sees its work as a craft. Where do these people with a passion for beer come from? They come from all walks of life. There is one particular Maine native whose connection with Maine and islands goes back for generations. Patrick Morse is currently brewing beer in New York City.

And yes, Patrick is my son, so you’ll forgive me my fatherly pride.

In 1885, my grandfather, Frederick W. Morse, traveled to Little Cranberry Island from Isle au Haut at age 11. He made a living on the island and later became fascinated with the emerging art of photography and traveled to Illinois to learn the craft. He eventually returned to the island, married and took over running the general store.

My father, Nathan S. Morse, was born and raised on Little Cranberry, also known as Islesford, just off Mount Desert Island. He, along with his brother and sister, helped their father with the general store under the watchful eye of their mother Mary. Mary Smyth Morse had also grown up on an island, but much farther away. She was born in the coastal village of Ardmore, Waterford County, Ireland.

Whether by coincidence or chance, my wife and I also live on an island. Eastport is on Moose Island—it was truly an island until the 1930s, when a causeway was built linking it to the mainland— and it is, of course, the eastern-most city in the country.   We live in a historic 1887 brick building in Eastport’s downtown.

Although Patrick no longer resides in Maine, his island legacy continues. He is the head brewer for Flagship Brewing Company on Staten Island in New York City.  From the brewery you can see the Staten Island ferry pier and ships heading for port.

These days, instead of taking the mail boat to Little Cranberry, Patrick’s wife Tasya rides the ferry each day to her job in Manhattan.

Flagship Brewing Company was established in 2013 with principal owners Jay Sykes and Matt McGinley, both Staten Island boys. Another islander, Matt Sanders, is on the brewing staff.

Patrick has been head brewer from the beginning. The brewery now has 13 tanks and a bottling line. Partick’s brewing experience with Harpoon, Eagle Rock and Kelso brewing has served him well as Flagship continues to grow.

Last year, the brewery produced 3,000 barrels (384,000 gallons) and bottled about 35 percent of the production. The core beers are an IPA, APA, Lager, Dark Mild and a Wit. They also brew a number of seasonal beers and ales, including Summer Ale for the New York Yankees’ minor league team that plays just down the street.

This spring, the business will add a new core beer, a kolsch.

Maine and the island connection seem to follow Patrick. One of the newest members of the Flagship brewing team is Felipe Higgins. Felipe also hails from Maine and his family was among the early settlers of Roque Island just off Roque Bluffs near Machias. Felipe’s great-great-great grandfather was Joseph Peabody of Salem, Mass.  Roque Island is still owned by the family.

An island family heritage is not necessary to become a good craft brewer, but it may give you that sense of independence, a solid work ethic and a respect for tradition. Take the ferry to Staten Island and visit Flagship Brewing Company. I know a guy who will give you a great tour of the brewery.

Along with being a proud father, Michael Morse owns and operates an art gallery in Eastport. 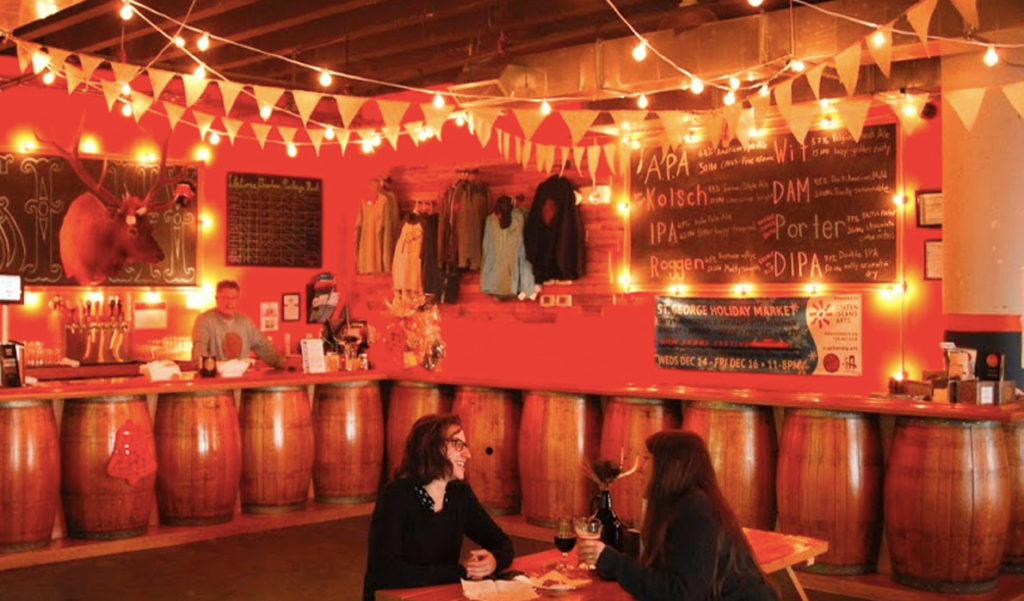