Strung between Antarctica and the Equator, a thin chain of islands in the South Atlantic Ocean lies almost abandoned by commerce. Once valued for whaling or as stopping points on the way to the capes at the tip of Africa and South America, these islands exist mostly in the minds of history buffs who see them as the settings for exotic stories of Napoleon’s exile, Shackleton’s small-boat voyage, or Darwin’s explorations on the Beagle.

However, there are still people down there, living lives of remarkable isolation and facing challenges that differ only in degree from those seen every day on the coast of Maine. In 2015, we joined 65 other passengers on the MV Plancius for a 32-day cruise from Ushuaia, Argentina, to Antarctica, and then up the middle of the Atlantic.

As we expected, the weather, the waves, and the wildlife were spectacular but we were also struck by the lives of the humans in these places.

Once the site of industrial-strength whaling, South Georgia’s settlements are slowly crumbling. At the base of icy 9,600 foot mountains, 18 people inhabit the port of Grytviken, all of them involved in the administration and conservation of this 100-mile-long island.

There is much human history here. Antarctic explorer Sir Ernest Henry Shackleton is buried at Grytviken, not far from the end-point of his 800-mile voyage to seek help for his marooned expedition. The whaling “factories” there are massive. In the eyes of the staff, however, the bigger story is the undoing of the damage done to the environment by humans.

The shoreline teams with seals and penguins. Whales swim in the coves.  Reindeer introduced by Norwegian whalers have been eliminated. The final challenge is the “eratification” of rodents that came ashore from ships. Some $13 million has been spent to bring in helicopters that have spread rat bait across the island. With no runway on the island, everything and everybody involved in the effort has come in by ship. In the spring of 2015, the job was almost complete. With the disappearance of the rats, seabirds are starting to nest on the island again.

Gough Island is an eroded volcano where a crew of six operates a weather station. A supply ship visits once a year to bring in a new crew and everything it will need. It isn’t a paradise, however, because the native seabird population is under attack from extraordinarily large mice whose ancestors came ashore from a ship and have spawned generations of monsters that have grown fat eating the chicks of ground nesting species. The Royal Society for the Preservation of Birds is making plans for a South Georgia-style bombing campaign but the logistics will be daunting. 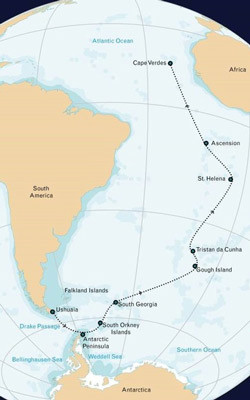 Tristan da Cunha’s citizens describe their home as “the remotest island” and it is the most isolated place where people actually live and work for a lifetime; 265 people, with only nine family names, fish and farm on the shoreline at the base of a 6,700 foot tall volcano. There is no airport and only a few ships visit a year.

Our visit was canceled because over 100 of the islanders had come down with a mysterious upper respiratory infection and the island doctor thought contact might be bad for us and/or the islanders. We tossed as much as we can of our medical supplies into a police launch and admires the scenery from the anchorage.

Saint Helena’s bare, rocky cliffs make the island a natural fortress. In one of the few gaps in these ramparts, a town that could be in the Cotswolds shelters behind a 19th century wall and moat. Mountains in the middle of the island catch rain from the trade winds, making the interior green with forests and grazing land. The island is a perfect setting for a high security prison. Starting with Napoleon after Waterloo in 1815 and ending with the departure of political rebels from Bahrain in 1961, Saint Helena often filled this role for the British Empire. 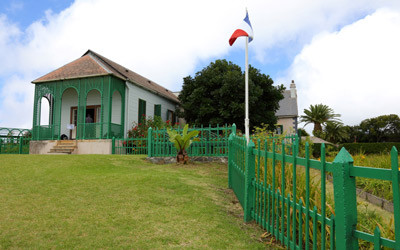 The house the deposed Napoleon was confined to on St. Helena.

No longer a prison and off the beaten path, Saint Helena struggles economically. Four-thousand people live on the island, many of them relying on payments sent home from “saints” who work far away. A ship arrives every six weeks or so with freight, mail, and passengers. A few cruise ships call but visitors are few to Napoleon’s house and other attractions on the island.

Change is on the way when we visited because a $400 million investment by the United Kingdom is bringing an airport to the island. We were given a tour of extensive blasting, filling, and grading. The airport project has stalled, however, due to the discovery of wind shear gusts at the ends of the completed runway.

As of May 2017, no airline has agreed to operate scheduled flights and the runway may never be useable by the larger jets that will be required to make tickets affordable.

Ascension Island lies half way between Africa and South America, just south of the equator. Once a hot and bare volcanic cinder pile, the island now has a growing, green center. A forest of plants and animals that have been imported from all over the world has grown up to create an ecosystem where almost every living thing is an “invasive” species.

To our untrained eyes, it looks like a tropical paradise. To an ecologist, it is a nightmare. Bamboo, Norfolk pines, sheep, donkeys, and banana plants are all rubbing shoulders and prospering. The whole experiment was proposed by Charles Darwin, who visited Ascension on the Beagle and thought it would be interesting to see if fresh water for the British garrison on the island could be strained out of the clouds by a bamboo forest, starting a process of greening the island.

Running out of time, we leave the Plancius at Ascension—the first place we have seen in a month that has a fully functional airport—and catch a flight on a U.S. Air Force plane that is returning to Florida. The 5,000-mile flight provides a chance for reflection. The distances are greater and the costs are higher, but the people of the South Atlantic face the problems of islanders everywhere.

The encouraging thing is that the kind of people who choose to live in these places is also the same everywhere, full of the energy and the determination to make it work.

Ginny Welles, the photographer, and Dwight Gertz, the writer, became acquainted sailing a ketch from Newfoundland to Port Clyde. Welles spent her first birthday at Christmas Cove and has been a regular visitor to Maine since then. She is an urban planner and environmental activist. Gertz teaches at Babson College, is a retired Naval officer and a former partner at Bain & Company in Boston. 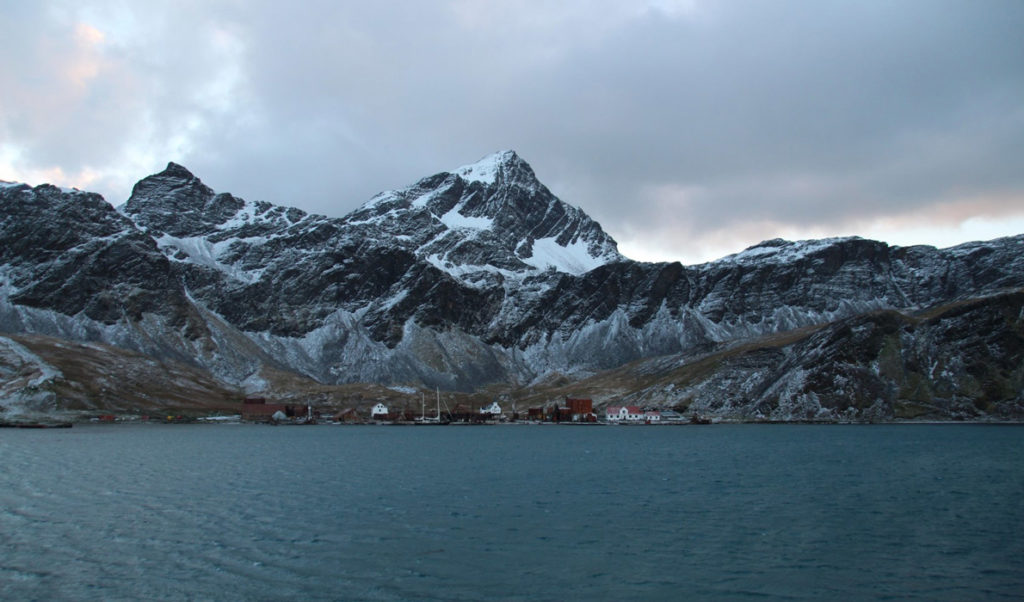