It was one of those occasions, Sen. Angus King admitted, in which he was speaking to people who knew more about the topic at hand than he did.

But at the Island Institute’s annual island energy conference on Nov. 6 in South Portland, King showed he had more than a casual understanding of the issues surrounding emerging energy technologies. In the 1980s, King worked for a company that developed hydro and biomass energy projects, and then launched a consulting firm that identified electric conservation measures in commercial and industrial businesses.

“We are in the midst of an energy revolution,” King said in his keynote comments, “and the islands are Bunker Hill.” That theme emerged in other discussions at the conference—islands, by necessity, seen as laboratories for energy innovation.

King predicted that in the next 5-10 years, and “maybe even sooner,” dramatic climate changes would come. “People just can’t deny it anymore,” he said, and so bold moves away from carbon-based energy would have to follow.

King pulled a small plastic card from his wallet that featured a graph showing the rise of carbon in the atmosphere over the millennia—and which posts its current level at 400 parts per million.

King passes copies of the card to his colleagues in Congress who are skeptical of the changes, he said. The rise of coal and then oil as fuels, beginning in the mid-19th century as the industrial revolution got underway, is an obvious cause of rising temperatures, King asserted.

“The correlation is impossible to miss,” he said.

Though “We’re in a lull with fossil fuel prices,” he said moving away from oil, diesel and propane will bring economic benefits to Maine. For every $1 increase in oil and gas prices, King said, Maine sends $1 billion out of the local economy each year.

“We use about a billion gallons of gas or oil a year,” he said.

The revolution King alluded to at the outset of his remarks is coming in the move away from centralized electricity sources.

“We’re talking about people making their own energy,” he said. King has introduced a bill to have federal law guarantee the right of ratepayers to connect photovoltaics and other self-generated electric production to the grid without penalty.

Among the island proving grounds represented at the conference were Kodiak Island in Alaska, Block Island in Rhode Island and Appledore Island in the Isles of Shoals archipelago at the Maine-New Hampshire border.

Darron Scott of Kodiak Electric Association said the island now produces all its power through renewable sources, including wind turbines and hydropower dams. Among the big users are fish processing plants and the nation’s largest Coast Guard station. A low-interest state loan of $30 million helped with upgrades, he said.

Block Island established the first offshore wind farm. Bill Penn, president of the island residential association, noted that the electricity it produces is positioned at the heart of high demand in the Northeast.

And on 95-acre Appledore Island in the Isles of Shoals, where the University of New Hampshire and Cornell University host internships and classes, lead engineer Alex Brickett described how its 14 buildings were powered through a careful balancing of 56 kilowatts of solar power, 7.5 kilowatts of wind power, diesel generators and batteries. 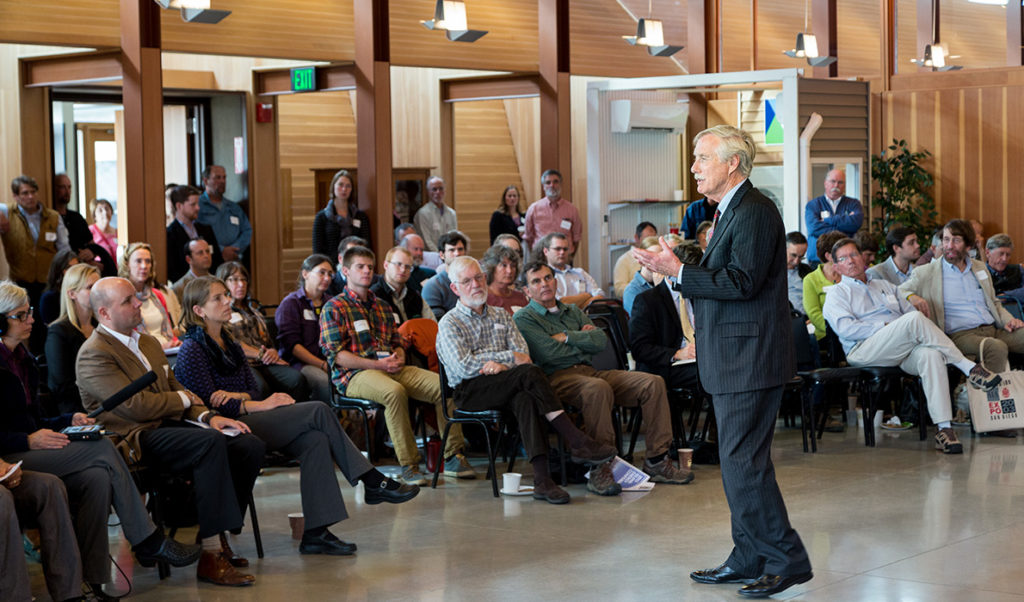