Tilson’s work was commissioned by the nonprofit Island Institute, publisher of The Working Waterfront.

Among its findings is that bringing Internet speeds up to broadband levels—defined by the state’s ConnectME Authority as a minimum speed of 10 Mbps of upload and download—could grow island economies by $90 million over ten years.

Establishing broadband speeds on the islands could create 170 jobs along the coast and on the islands by 2028, the report concluded, which would produce $9 million in additional tax revenue.

“Broadband represents one of the most effective ways to address the access challenges associated with island life,” according to Tilson. “Superior connections can provide economic, educational, medical and other benefits without the need for physical connectedness.”

The scope of the study included hosting public meetings on the islands, creating an inventory of current Internet technology, surveys to gauge attitudes about current service and possible upgrades, cost estimates for improvements, and business and operational models for island-based systems.

The Island Institute hosted a conference in November of island stakeholders on the challenges and possibilities of broadband.

“We wanted to answer community questions around improved Internet, broadband capabilities,” she said. “We did this because a lot of people were citing this as a need.”

As bad as the Internet speeds on the islands are—all are below the 10 Mbps threshold, a standard about 94 percent of Americans have accesss to—they are not an outlier for the state. Maine has been ranked 49th among U.S. states for Internet speeds.

But the islands pose special challenges for improving speeds. Not only do most have small year-round populations, but getting the service across the water has discouraged private providers from investing in upgrades.

The Tilson report suggests there probably won’t be a standard fix for islands. Different topographies, distances from the mainland and current infrastructure will likely dictate different solutions.

Among the fixes considered viable are:

Two of Maine’s year-round islands have taken matters into their own hands. Chebeague created a municipal broadband network and has been upgrading it to broadband levels. Islesboro is currently studying the possibility of building a municipally owned system.

The report provided individualized options for each island, but stopped short of making recommendations. 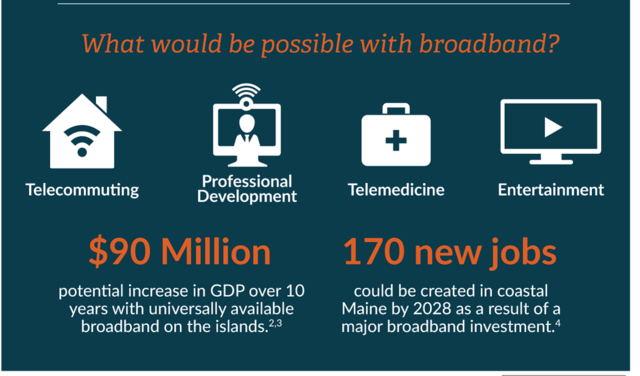