When you’re teaching in a small island school, the term “cross-curricular” is not a concept; it’s a day-to-day reality.

Bill Trevaskis, the sole music teacher for students in the pre-K to 12th grade Vinalhaven School, explained how he worked with his colleagues to a group of teachers at the Island Teachers Conference in Belfast on Oct. 5-6 (hosted by the Island Institute, publisher of The Working Waterfront). Trevaskis also is the school’s yearbook advisor.

“I was thinking about how cross-curricular doing a yearbook is,” he said, with writing, photography, art, design, and other skills used to produce the publication. “In a small school, you’re put in that position,” working across curriculums, he said.

At the workshop, Trevaskis focused on how using technology can foster those across-the-curriculum learning experiences. He shared lessons from another gathering of teachers he attended, this one at the University of Massachusetts in Lowell.

The teachers were gathered into small teams and given a box of craft supplies, with rubber bands, popsicle sticks, Altoid tins, Styrofoam, and the like. Each team was asked to build a musical instrument from the supplies, then write music for it, but in a new musical notation (in other words, not using the traditional staff with quarter notes, etc.).

Each team then was asked to pass the instrument and musical “score” to another team, without explanation. That team would try to read the music and play the new instrument.

“You’re going to work with people who have no understanding of what you’re doing,” he told the group, so when a music teacher collaborates with a science teacher, it helps to know how to find a common language.

The exercise also imparted lessons about working within limitations, a common circumstance for small island schools, with teachers having small budgets and broad responsibilities.

Trevaskis said a typical day might mean a three-minute transition between the cacophony of 4th- and 5th grade band class to a group of seniors working on the yearbook.

Another example of how a cross-curricular approach can flourish is when teachers seek music to enrich and enhance their subject areas. A social studies teacher working on a unit about hip-hop culture sought out Trevaskis, who found videos and recordings tracing the early days of the genre.

Similarly, a teacher covering the civil rights era asked Trevaskis to help find protest songs to flesh out the subject. Playlists organized by topics are available on streaming services like Spotify, he said, so students could listen to Billie Holiday singing about lynching in “Strange Fruit,” and protest folk songs from the 1960s.

Another tool he recommended for use in the classroom was Audacity, a free online software that allows students to record and edit interviews and natural sounds into podcasts. Scratch, another tool that’s appropriate for younger students, allows them to create animation.

The bulk of the workshop was devoted to explaining and demonstrating a technology created at MIT that allows students to use a laptop to create a musical instrument out of almost anything, from a banana to a person. The “Makey Makey” program software, when connected to a small circuit board, allows alligator clips or wrist bands to then link to an object or person. The student chooses instrument sounds from a webpage, which then can be played by tapping the object or person.

It was an odd sight, halfway through the workshop session—three teachers holding out the back of their hands, while a fourth tapped out a rhythm on them, with the sound coming from the laptop.

Trevaskis said students quickly tweak the prescribed approach to invent other variations or to push the limits of the frequency or number of beats. But that’s OK, he told his educator colleagues. In so doing, those students have become composers, musicians, and sound engineers. 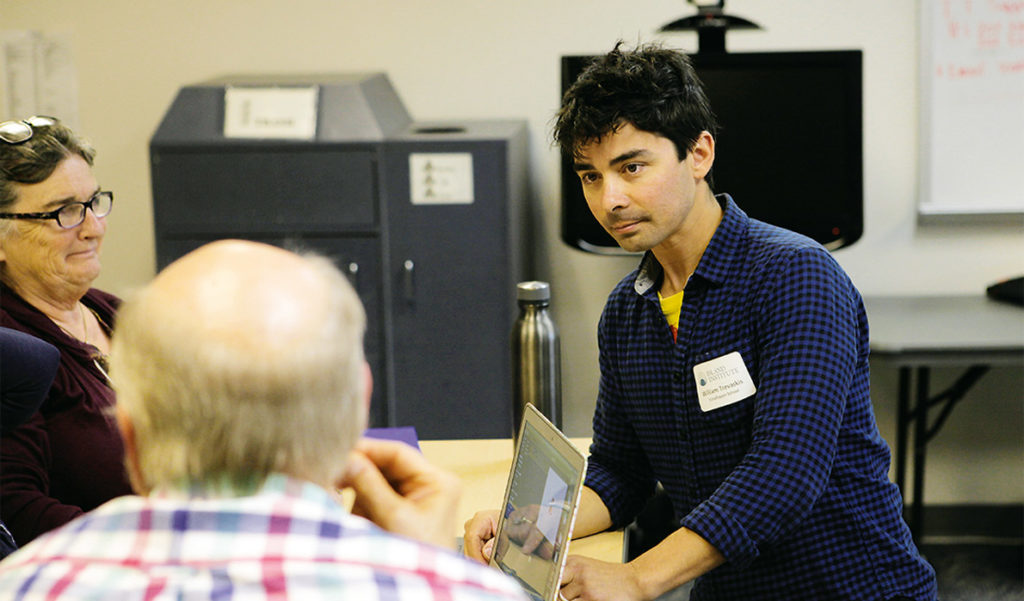