ISLESFORD—When Leeman Gilley Ham, a lifelong lobster fisherman and well-loved resident of Islesford, died in 2012 at age 99, the island’s entire fleet held a flotilla procession in his memory.

Katrina Winfield-Howard, a summer resident, recently recalled how moved she was to hear about the ceremony. Adam Olearcek, Ham’s great-grandson, was on his vessel Leeway. He called out, “Stand by for final call. Helen H, Helen H: Grampy, we know you’re setting a string across the Big Dipper.”

Such moments, said Winfield-Howard, illustrate the great love and respect residents of this small island community have for each other. Lobster fishing is central to the community’s life, so when the opportunity arose to install a new exhibit at the Islesford Historical Museum, a group came together to gather images, artifacts and tales that would honor the culture and heritage of the fleet through the decades. “Boats & Buoys: Lobstering on Little Cranberry Island,” opening June 21 with a reception from 5-7 p.m., is designed to provide insights into the trade’s challenging work and many rewards and to explore how a community of creative and independent fishermen and women works together for the good of the industry and community.

Islesford is a community of about 75 year-round residents, swelling to several hundred in the summer, on Little Cranberry Island (the two names are used interchangeably). Most residents make their living from the ocean, as their ancestors did. Among today’s fishermen are descendants of Islesford’s earliest settlers. Today, fishermen harvest many thousands of lobsters annually and ship them globally.

The museum here, founded by William Otis Sawtelle—a physicist, historian, genealogist and author who summered at Islesford—opened in 1927. In the 1940s, Acadia National Park acquired the museum and a former ship’s store next-door, called the Blue Duck, where schooners once docked. The museum has long featured Sawtelle collections. More recently, Acadia set aside one of the rooms for exhibits created by the community. The inaugural community exhibit in 2014 celebrated renowned artist and local resident Ashley Bryan.

In planning for 2015, a group of year-round and summer residents had two purposes in mind—to celebrate local fishermen, and to raise money for the building’s much-needed repairs. With assistance from Friends of Acadia in Bar Harbor, and working with Acadia National Park, they formed the Friends of the Islesford Historical Museum in 2014.

Winfield-Howard, whose grandparents first arrived as summer residents in the late 1890s, spearheads the group.

“We went to the park and said, ‘We can raise money for the museum, but we’ve got to have an exhibit of the history of the island people,'” Winfield-Howard said. The decision to focus on lobster fishing celebrates an integral part of island life and a symbiotic relationship between year-round and summer residents.

“It’s about the magic of this place, the courage of these fishermen, whom we all love and admire, the last frontiersmen who brave the sea,” she said.

The passing of older fishermen and other residents risks the loss of a sense of heritage, Winfield-Howard said.

“A lot of younger people have come here who don’t know the history,” she said. “I think when a place loses it history, it loses its soul. So I want to connect the young people and the island to its history.”

Visitors will be able to step on board the stern of a lobster boat and handle the tools used daily by fishermen; enjoy a video starring several lobstermen answering questions about their trade; and see boat models, paintings, buoys and hooked rugs created by fishermen and their families.

“The first thing we did was take a huge, life-size photograph, in color, of all the fishermen holding their buoys, in front of the fishermen’s co-op,” said Winfield-Howard. A display of models traces the evolution of fishing boats, from skiffs, through Friendship sloops, to today’s big rigs. A mix of historic and modern photos depict generations of fishermen in the same family.

Rebecca Cole-Will, Acadia’s chief of resource management, said the park is thrilled with the new Friends group’s help in fixing the building.

“The building and the collections are important to the Cranberry Islanders’ heritage and history, so we’re grateful for their support,” she said. “It’s a beautiful building, with great historic integrity. The work needs to be done within historic preservation guidelines, and that always entails special care.”

An assessment identified a lot of work needed, including an estimated $100,000 worth on the envelope, to repair the slate roof, the historic single-pane windows, and some of the wood and brickwork.

The museum is open daily June 15 through Sept. 6, 11 a.m. to 4 p.m.; and Sept. 7-30, 9 a.m. to 3 p.m. Little Cranberry Island is accessible by mail boat, private boat, tour boat or water taxi. The museum, a restaurant, art galleries and post office are a short walk from the dock.

After visiting the museum, visitors may stroll on the beach or bike the island’s roads to experience this unique small island community. 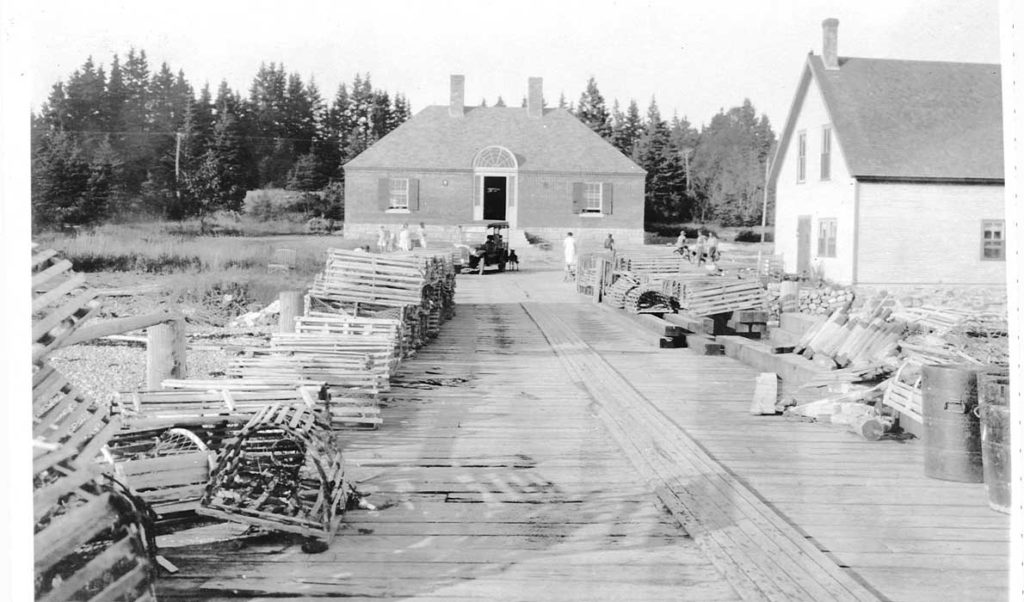