ISLESBORO – A dull winter haze has settled over the island after some morning sun, bringing a rawness to the air and making the fireplace in the Murphy home that much more seductive.

But Ryan Murphy would rather be outside, working his way through the obstacle course that is the Pendleton Yacht Yard, just down the street from his house. He visits the yard two or three times a day, and since it’s school vacation week, lunchtime means he can don hat and gloves and roll.

Murphy rolls – actually, pedals – on a unicycle. As the 14-year-old eighth-grader at Islesboro Central School points out, unicycles have a single, fixed gear. You’ve got to keep pedaling or stop. No coasting, even.

And there’s no brake, a fact that becomes more relevant when Murphy cycles down a steep ramp onto a float at the boat yard.

“I started unicycling when I was seven. I got a black eye,” he matter-of-factly admits, while explaining his plans to purchase a bigger, better cycle. “I’m not super cautious,” he says.

Murphy’s take on island life is both different than that of his peers on the mainland and similar.

There are no shopping malls, movie theaters or even pizza joints on Islesboro, places where middle-school aged kids might find diversion and escape from the rigors of an adult-run world. But the same could be said about many rural Maine towns.

But the island life means those diversions are not a car-ride away, either.

Murphy turns the familiar teen lament that “there’s nothing to do here” on its head. The way he entertains himself can be done anywhere.

In addition to the cycling down docks and hopping up onto rocks at the boatyard – which elicit friendly waves from the crew there – Murphy enjoys another balance-reliant outdoor activity, “slack lining,” or walking across a strap that is loosely hung from tree to tree.

The key, as it is for the unicycle, is “to stay focused,” he explained, training one’s eye on something in the middle distance.

“I started skiing when I was two,” and now does tele-boarding, or using a narrow board to navigate the slopes. Unlike a snowboard, tele-boarding means both feet face forward.

Murphy also plays mandolin, guitar and ukulele and even has a home-based recording station which allows him to multi-track his instruments. And he plays on the school’s ultimate Frisbee team, and the soccer and basketball teams.

In the summer, he sails small boats through an organized island club.

Though he has lived on Islesboro for about a year, island life is not new. The family lived on Cliff and Chebeague islands in Casco Bay for several years, after moving there from Yarmouth.

His father, Gordon Murphy, is one Islesboro’s three physician assistants, and his mother Megan, who in addition to caring for two daughters who live at home with Ryan, operates the Rosalie Joy’s Bakery.

Unicycling is clearly a passion for Murphy. His older sister had brought one home once, and after messing around with it, he was hooked. The solitary nature of the activity seems to suit him fine, as do the challenges of the “course” he finds at the boatyard.

Keeping the tire underinflated, Murphy pedals over the rough gravel road and parking lot, down the slope to the shore, where he hops up onto rocks and slabs of wood, before nonchalantly traversing the ramp that leads to a couple of floats.

If he has any fear of slipping and falling into the frigid water, he doesn’t show it.

Murphy’s mother recounts hearing from someone at the boat yard who couldn’t believe his eyes when he observed the young man testing his mettle on the icy floats. For now, both boatyard and Mom don’t object, though Murphy said the boatyard crew is less receptive to his visits during the busy months.

“I get kicked right out there in the summer,” he said.

Next on his list is getting a mountain unicycle; it’s got a bigger wheel with a “beefier” tire, he says. Like celebrated mountain unicycler Chris Holm, who cycles along sheer cliff edges, Murphy wants to climb mountains on his cycle. And, with some luck, he hopes to get a sponsor.

But for now, the boatyard is enough. 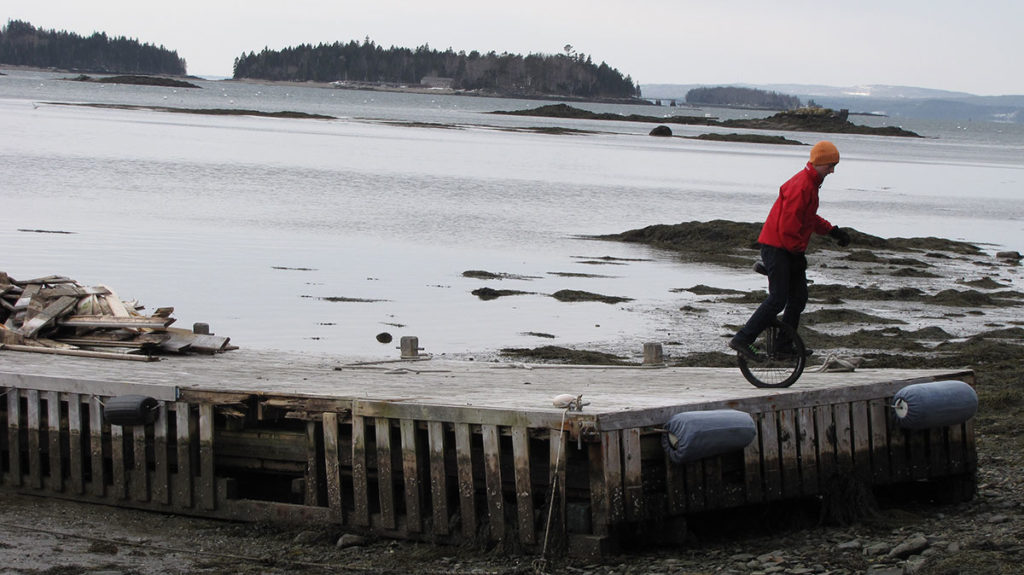