April’s issue of the North Haven News, our monthly island newspaper, came with a delightful surprise announcement: Cooper’s Landing would be re-opening for the season on April 17.

The Landing has been an on-and-off North Haven institution. The slate blue building just across the street from the ferry terminal has housed, variously, The Landing under different management throughout the years; H. J. Blake’s bar and restaurant; my own late establishment the Little Urchin Bakery; a fish market; and the Landing as we know and love it today.

Mickey Campbell of the North Haven Oyster Co. family runs The Landing in its current iteration. It has a spacious deck augmented by a few tables indoors and a few picnic tables on the grass under the trees on Smith Street, across from Calderwood Hall. The menu is incredibly diverse, with a regular ol’ cheeseburger and fries available but also the best veggie burger and veggie hot dog, gluten free bread if you need it, and a decadent but actually healthful raw chocolate shake.

There’s Gifford’s ice cream with every topping imaginable and a smoothie with kale and fruit in it. There’s a lobster roll or a crab roll, with the seafood often caught that day. It’s all delicious. The line at the counter can be 20 people deep in the high season, but the food and atmosphere are worth the wait. Even the grilled cheese is the best of its kind.

We haven’t always been so lucky to have any restaurant at all open in April. We used to have to wait until May or even July. Lunch at The Landing in early spring can be a pretty chilly meal, to be honest, but last spring everyone brought their kids there after school dismissal to shiver a little on the porch but revel in the actual availability of food and socialization. We were even able to eat there or at Calderwood Hall into late fall.

I can honestly say that all winter, I’ve been thinking wistfully of the time when I can once again eat a veggie burger, sweet potato fries, and a little dish of ice cream with rainbow sprinkles in a space other than my house. Or grab a salad pizza at Calderwood Hall, or treat myself to a tofu bahn mi at Nebo Lodge. Occasionally in the winter we’ll have a special supper club night, or a smorgasbord before Christmas, or even a fundraiser spaghetti supper, but other than a pleasantly rowdy St. Patrick’s do at the North Haven Brewing Co., we’d been without a night out for a full season.

And sure, we have dinner with friends, or take little trips to the mainland to enjoy that Suzuki’s sushi platter or the rice cakes at Long Grain or a cocktail at Fog Bar, but what I miss the most is that impulsive lunch out, turning to my daughter as we leave school and saying, “Want to get a veggie dog and a milk at The Landing?” Or, “How about a scone and a bowl of soup at Calderwood?” Going out to eat becomes something special and highly anticipated when we don’t get to do it for six months of the year.

By the time you read this, I hope to have sat on that porch and eaten that veggie burger, maybe with a raw chocolate shake instead of a dish of ice cream, if I’m feeling virtuous. Maybe I’ll have had breakfast at Calderwood Hall, or even a glass of rosé at Nebo. I know they’ll taste as good in real life as they do in my anticipating imagination. 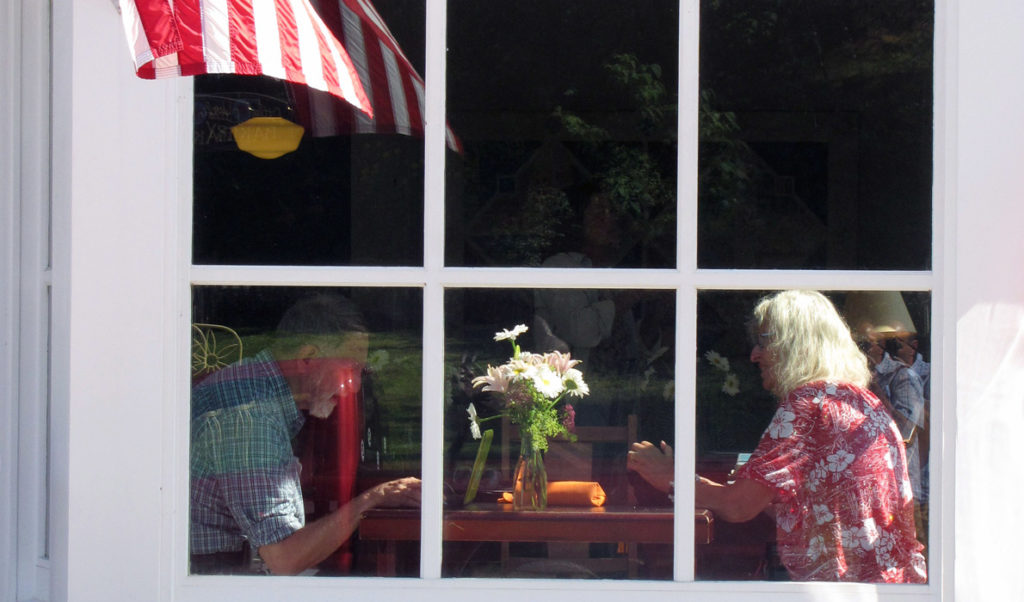