For a week during each of the past four summers, a group of college students and their instructors have been channeling the innovative spirit and nature-oriented sensibility of R. Buckminster Fuller in the design pioneer’s own habitat.

Throughout his life, Fuller spent summers on Bear Island in Penobscot Bay. The Fuller family bought the island in 1904 and set up a rustic compound. As a child, Fuller, who died in 1983 and was best known for his geodesic domes, discovered an appreciation for nature on the island, and also exercised his predilection for invention.

“One of Bucky’s earliest Bear Island inventions modeling nature was a mechanical oar patterned after the motion of jellyfish,” wrote Lloyd Steven Sieden in Buckminster Fuller’s Universe (2000). “It consisted of a tepee-like cone mounted on the end of a pole and resembled an inside-out umbrella.”

In 2004, John McLeod and Steve Kredell visited Bear Island at the invitation of a Fuller family relative, Jonathan Marvel. McLeod and Kredell are teaching architects who were working for Marvel at his architectural firm in New York. Marvel invited the pair to help rebuild one of Fuller’s domes for the centennial of the Fuller family’s ownership of the island.

McLeod and Kredell went on to open their own firm, McLeod Kredell Architects in Middlebury, Vt., and to teach. 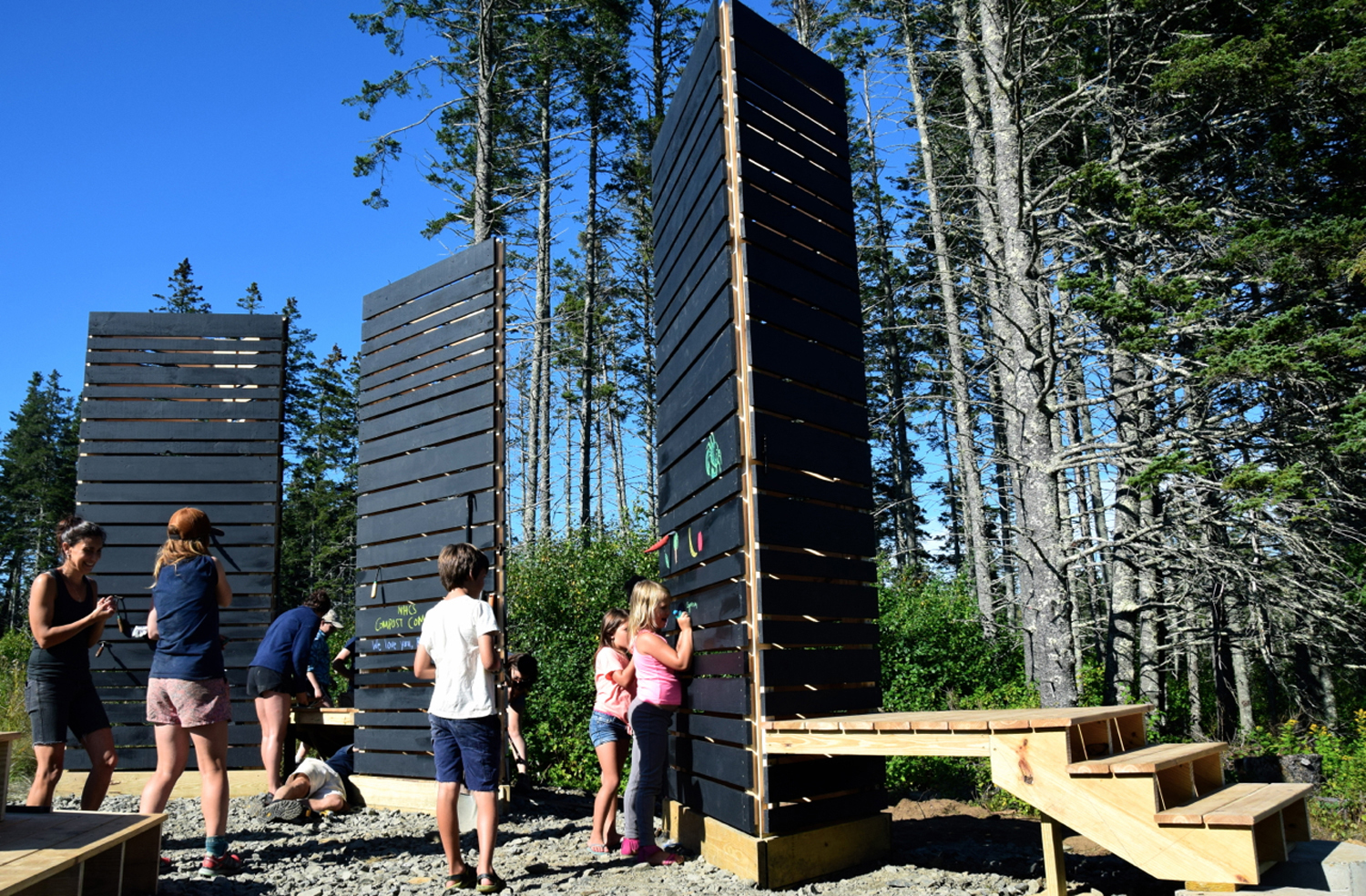 The team chalks pictures on the composting towers, which are painted with chalkboard paint. The towers are fitted with two hinged panels, for dumping in waste and releasing finished compost.

They also have long had an idea about getting a group of college students together in an outdoor environment to put together a community oriented design and build project while also living lightly on the land.

“We wanted to strip away the noise—no computers, no telephones—and just think about what’s important in life,” said Kredell.

“We had been looking for a place to host such a program,” said McLeod, “and just in conversations with Jonathan, suddenly Bear Island came up as possibility. With the Buckminster Fuller connection, it seemed like a natural fit.”

McLeod was familiar with the region: His family has a home in Tenants Harbor. So with Marvel, they hatched a plan for a one-week gathering of students, architects, and professors, to be called the Bear Island Design Assembly.

During this year’s assembly, held Sept. 5-12, McLeod and Kredell spoke by cellphone and described the scene around them. Bear Island is quintessential Maine, with a view of Camden Hills across the bay and sailboats and lobsterboats plying the waters. In this rustic homestead, there’s no running water and dinners are eaten by candlight. It’s all about community, everyone cooking meals together and sleeping in the 110-year-old Big House, which features a stone fireplace and enough beds for all. Star-gazing is a popular after-hours activity.

Students taking part in BIDA’s first year built a series of benches for Bear Island and spent a day on Hurricane Island to work out prototypes for rigid portable shelters and assist the Hurricane Island Foundation with renovation on the old Outward Bound facilities.

In its second year, BIDA built a farmstand for Islesboro Central School’s horticulture program. The following year, it again paired with the Islesboro program and built tractors which fit over a garden row and double as miniature hoophouses in the spring for early starts. The structures won the 2014 American Institute of Architects Vermont Excellence in Architecture Design Award for their multipurpose facets and elevation of the typical chicken coop to a work of art.

On Sept. 5, a team of nine undergraduate liberal arts students, most from Middlebury College, along with McLeod, Kredell, Marvel, Hurricane Island Center for Science and Leadership Director Sam Hallowell, Middlebury-based builder Alex Carver, and three student alums—all of the instructors and assistants volunteering their time—hopped on a charter boat in Rockport with all the food and tools they would need for the week.

They traveled first to North Haven to meet with Jessie Hallowell, who helps run the island’s farm-to-school program and is Sam’s sister. The group visited the site and discussed the school’s needs, then got back on the boat for the ride to Bear Island.

“On Sunday, first thing, we start designing, and by the end of Sunday we choose a direction,” McLeod explained. “On Monday we detail the project and get the quantities we need—screws, boards—everything has to be chosen by 6 a.m. on Tuesday, when we phone in the order.”

The materials, coming from Rankin’s Hardware in Camden, arrived by boat later on Tuesday, and construction took place until Saturday, when the completed station was loaded onto a boat and delivered to North Haven, with the team arriving back in Rockport in the late afternoon.

The group makes a point of supporting local farmers, fishermen, and businesses as part of their project.

BIDA serves in part as a research extension of the two architecture firms, and students consider it a professional externship as well as a complement to their academic training. Funding from Middlebury College substantially subsidizes student participation in order to make the program as financially accessible as possible. The partner organizations contribute money for building materials. And the students pay a modest fee.

Thanks to these collaborations, Kredell and McLeod have transformed their idea into a unique model.

“We think design is at its best when it’s stripped down to its essentials,” said Kredell. “This is a perfect place to do that.”

“This is architecture at its best—living and working together as a team to make something for a community,” said McLeod. 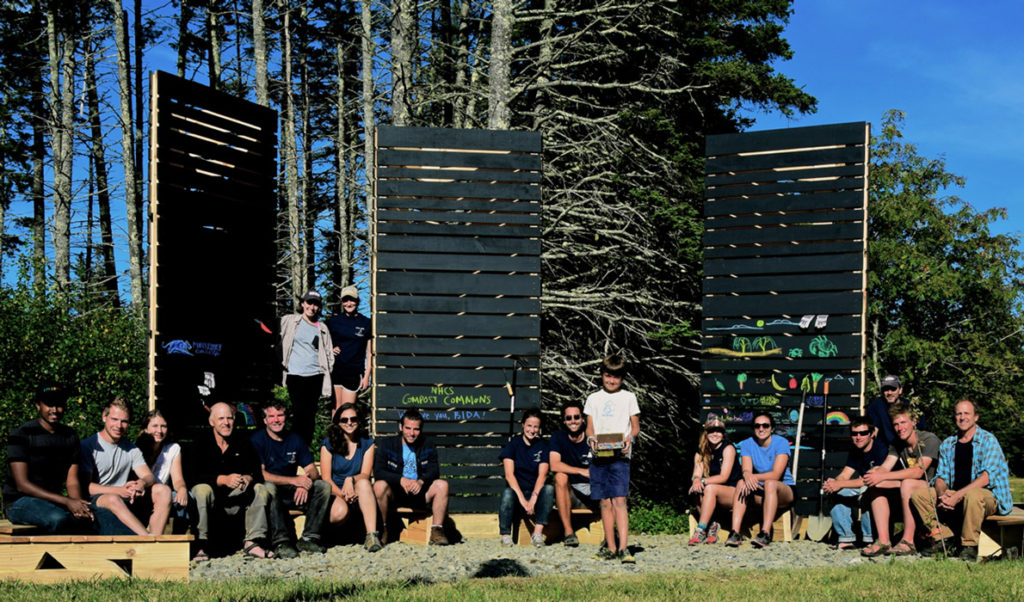 The team chalks pictures on the composting towers