On a foggy morning in June, a friend and I were down at the dock loading up his lobster boat to make a trip off island. Leaving the island is a rarity in these days of restricted travel, and this day was made more special because we were planning to go to the dump.

On the mainland, a dump run is nothing special. Here on the island, we don’t have the convenience of a dump, so disposing of large items is a complicated undertaking. Today we were transporting some furniture and construction debris left over from a renovation project.

The smallest breeze furrowed the water and the boats had all swung northeast on their moorings with the incoming tide. The fog muffled the only sounds: sharp cries of gulls and the bumping of a skiff on the dock as a fisherman rowed in.

It was low tide so the wooden pier towered over the water and the aluminum ramp sloped steeply down to the dock. To avoid the difficult footing, we were using the mechanical winch to lower an old blue linen cabinet into the boat.

I watched as the winch wound the cable up and the cabinet swung out over the still water. It slowly turned, a quarter of a revolution, and before it could turn any more, I ran to dig my phone out of my bag to take a picture. Something struck me about the moment, and though I couldn’t say what it was, I wanted to capture it. An even gradient of color sifted through from the flat white ceiling of fog to the steely blue water directly in front of us. The only interruptions were the faint outline of Kimball Island and the scattering of lobster boats at their moorings. The dusty, banged-up paint of the cabinet matched the darkest part of the water almost precisely. It tilted to the right but the ropes held it firmly.

In the photo, the distance between the cabinet and the water seems infinite. The pier, the winch, and the boat are all outside the frame and so there is no reference point to show where the cabinet came from and where it was going.  It would be easy to come up with a metaphor for this image. It could represent the fragility of the island community in a time of crisis. The cabinet could be the last of its kind, like the last member of an old fishing family leaving the island.

I have never been drawn to this type of visual metaphor. It is too simple and does not explain the nuances inherent in a working community. Sometimes I am frustrated at the way the Maine coast is viewed as a pretty place to visit in the summer. Photos like this one are seen as quaint relics of a time long gone.

What I do appreciate are images that invite us to ask questions. My favorite Maine photo is Peter Ralston’s “Pentecost,” in which a fishing boat tows a boat full of sheep into the glittering fog. It’s a lively image that suggests a story at the intersection of humans and nature.

I want people to look past the pretty scenery and ask questions about the stories behind these photographs. To visit the islands and engage with the people in a meaningful way. Ask why the cabinet is hanging over the water. It got there somehow, and behind the quirky imagery is a long tradition of treating objects with care and reverence.

By asking these questions, we can come to appreciate every aspect of island life, not just the pretty scenery but also the hard work that keeps these places livable. 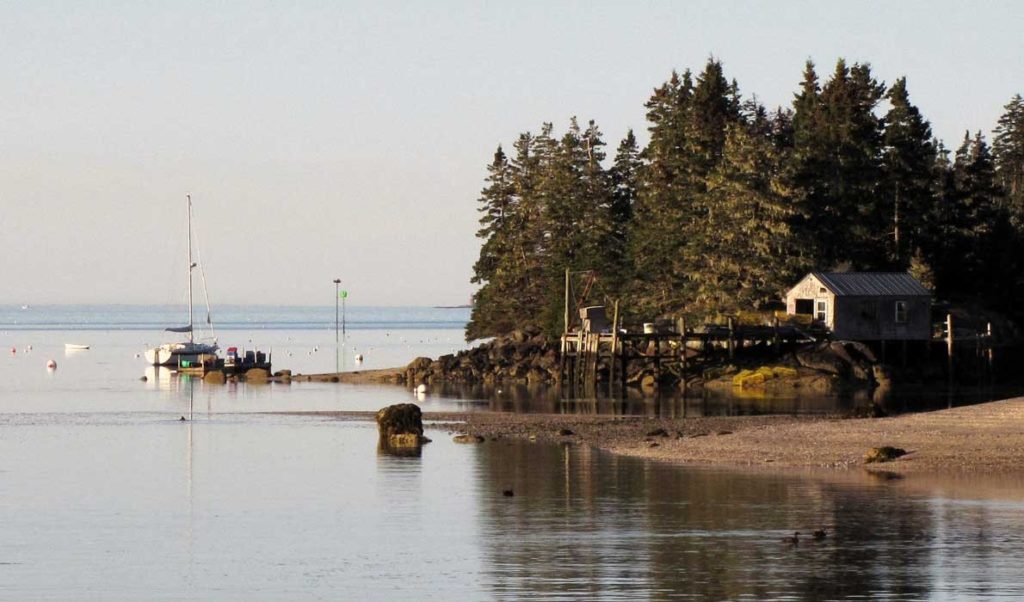