I keep my cell phone in one corner of the kitchen, touching a window, where it receives a one- to two-bar signal frequently enough that the battery will go for a few days before it needs to be recharged. The signal might not be strong enough or steady enough to maintain a conversation, but it is pretty effective for texting.

I used to say I would never text, but when we heard last spring that we were to become first-time grandparents, I knew it would be good to finally get a smart phone that would make texting a manageable if not frequent form of communication with our kids. I can actually say that I have yet to misplace my cell phone at home because this is the only spot where it makes sense to keep it.

At 9:15 p.m. on Sept. 22, I heard the little “brrring” that signaled a text had come in. It was the one we’d been waiting for from our son Robin. His wife was only a few days past her due date and it was time for the big event. “Man the baby stations!” he messaged.

They had been at the hospital for about an hour and things were progressing quickly. He said Stephanie was doing really well and he would call when the baby arrived. All we had to do was wait for the phone call we’d been happily anticipating for weeks. Just before midnight the phone rang.

Through tears that I briefly mistook for the joyful emotion of first time fatherhood, my son told me, “Mom. I’m so sorry. Baby Logan didn’t make it.” This made no sense. Stephanie had a trouble-free pregnancy. She was careful and healthy. Their 8-pound baby boy had a heartbeat until minutes before birth, and yet he could not be revived.

We wanted to go to Baltimore to be with our kids. We knew Stephanie’s parents were on their way. “Please wait,” our son requested. “As soon as Stephanie has recovered a little, we really want to come to the island.”

To many of us, these islands hold a powerful recognition as home, regardless of the amount of time we spend here.

At the risk of sounding fey, there is a healing energy to be found in the Cranberry Isles. The internal noise of life can be muffled by a walk through the quiet woods.

At the beach, the resonance of waves breaking against rocks or rolling smaller stones on the shore provides a recognizable rhythm of life. The sound opens the soul to peace.

The birds, too, have a special place in the restorative energy of the islands. The antics of sand pipers or plovers running just ahead of the waves remind our facial muscles how comforting it is to smile. The great blue heron, flapping his wings in majestic slowness, seldom flies by when you would choose, but passes over just when your spirit needs to see him the most.

Bald eagles, ospreys, sea gulls and crows are common distractions, reminding us to look up and look up again; there is always something worth seeing. Near the houses and in the woods, the dependable chickadees and nuthatches stay all year, chattering away through every season, undaunted by human sorrow.

It is not just the physical aspects of the islands that promote a sense of healing. There is comfort to be found in the small community that comes together to share the burden of grief.

In the past few months several people from both Islesford and Great Cranberry have died. They were people who made you a better person for having known them, making it that much harder to say goodbye.

Islanders are good at helping each other through these times, the most recent example being the flotilla to celebrate the life of Richard Alley. Richard was a fisherman and carpenter who grew up on Great Cranberry and settled and raised his family on Islesford. He passed away in September at the age of 89. The service was held on one of those sparkling fall days, when our islands are at their most beautiful.

Thirty five boats, most of them lobster boats from local harbors, met at Great Cranberry and followed the Sunbeam in a single line into Johnson’s Cove to listen to the memorial service broadcast over the VHF radio.

In my 39 years of living on Islesford, I have had the privilege of attending six such flotillas. They are one of the most moving and reverent occasions I have ever witnessed. They embody the kind of comfort I associate with my island home; a strong sense of attachment to a fishing community and the peace that comes from being surrounded by quiet beauty in good times and bad. This is a healing place. 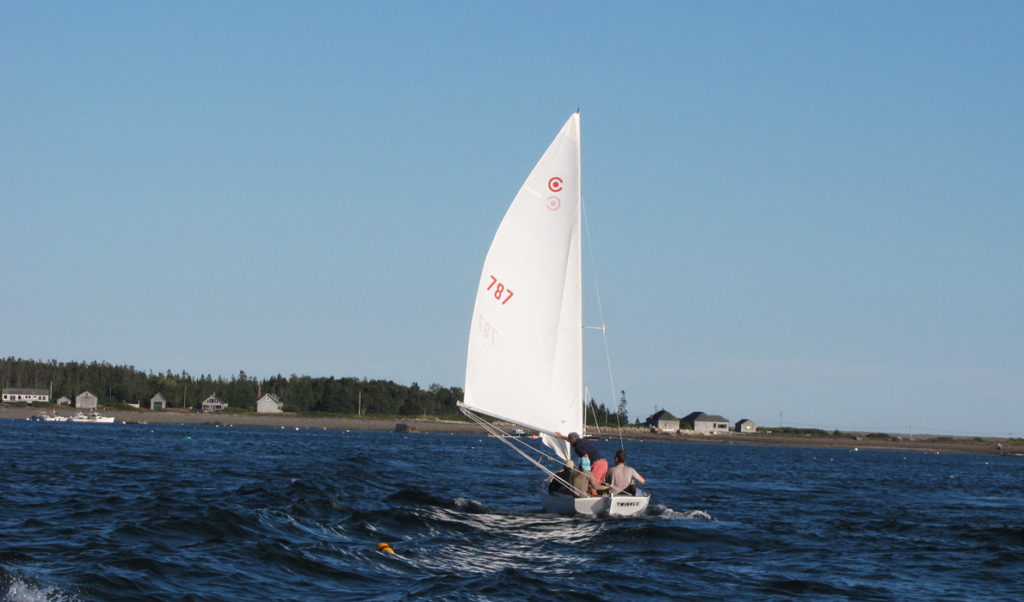