More than 50 years ago I was sitting on a porch at my parent’s place on Sheep Island. It lies in the New Meadows River, opposite the Basin, a sensually stunning refuge from stormy weather known to most who cruise Maine’s coast.

I was riveted by what I saw—smoke rising from a cottage tucked into the green-tunnel passageway to the Basin. It was reduced to smoldering rubble, apparently without any effort having been made to save it. It was early days in my half-century sojourn on Sheep, but I already knew that fire was the most deeply dreaded danger for cottages where fire engines cannot go—especially for those on islands like mine with no power or water.

First startled, then saddened, I wondered what had been lost in that fire. Fishing and boating gear, surely. Probably comfortable shoes and clothes, favorite books and records. But it would be decades before I knew that the only irreplaceable loss from this cottage fire would have been a photo album depicting the life its owners had led there.

Ironic circumstances led me to watch—again—with my breath held as a wild fire recently threatened all the cottages on Sheep Island. After 50 years of shifting food, water, laundry and gas cylinders from car, to skiff, to dock, to cottage, old legs protested. We moved across the river to a fully accessible shorefront spot in Phippsburg, within full sight of our treasured island.

So on Friday, June 25, I was able to watch huge billows of smoke envelope it. The thick smoke prompted Bath residents 15 miles away to start quizzing the city’s fire chief.

The fire was being fed by a ginormous deadfall, mostly of highly combustible spruce, poplar and cedar from a microburst that hit the island five years ago. A strong southwest wind was driving it directly toward the cottages I knew so well. I sickened at the thought they would soon be gone. I had never been more frightened.

First, I had a flashback to the Basin passageway fire. Then came

some re-runs—reminders of the triumphs and defeats island cottagers experience in their daily contests with wind, water and weather:

Don’t tell me. Granddad took out the lower unit on that reef again?

Look! The herd has taken back the abandoned baby seal we rescued and returned.

She raised the centerboard just enough. So we turned the spindle buoy like a door hinge and won the race.

Finally, I couldn’t watch any longer. Helicopters were dropping bags of water by mid-afternoon, but I thought it was too late. I went to bed despairing. But the clouds that threatened destruction by fire had blocked my view of a near miracle.

Out of my sight on the west side of the island, truly heroic efforts by dozens of area firemen, the Coast Guard and state forest rangers had achieved what had seemed impossible. Amid explosions of dry timber, they created a perimeter around the fire, enabling choppers to douse the flames. All ten buildings on the island had been saved.

Now I think I’ve learned what a fire can and cannot destroy. Yes, all material possessions and the cottages themselves can, if reduced to ashes, be replaced. But some intangibles are indestructible. Some occupy these cottages mostly because their families have always done so. Others do so primarily for the refreshing challenge of living more simply, accepting nature’s dictates. (All seem to me to take the beauty surrounding them too much for granted).

In any case, renewing their Sheep Island ways, summer after summer, as they grew into adults seems to have indelibly marked most Sheep Island children: one became a licensed mate aboard the Camden schooner Mary Day; one is about to retire after a career as the Coast Guard’s chief naval architect; one graduated from Annapolis and had served as a Navy SEAL; one became a skilled homebuilder and fire chief for Cundys Harbor; one became one of the most skilled restorers and repairers of sailboats in the Midcoast; one became one of Harpswell’s most popular doctors; one has just gotten a degree in marine biology.

Sheep Island and its ways of living seem to have put an unmistakable imprint on each of them, as well as on the others who return to the New Meadows River every year. No fire can remove that imprint. No fire can destroy remembered events of a different kind of life still echoing in those island cottages. They are fire-proof. Maybe that applies to many island communities. Can there really be such a thing as a Sheep Island Imprint? I think so.

That sort of gallows humor, spit out in mid-crisis, has the Sheep Island Imprint all over it.

“Boiled trout,” I expect, will be mentioned whenever stories of this wild fire are told. 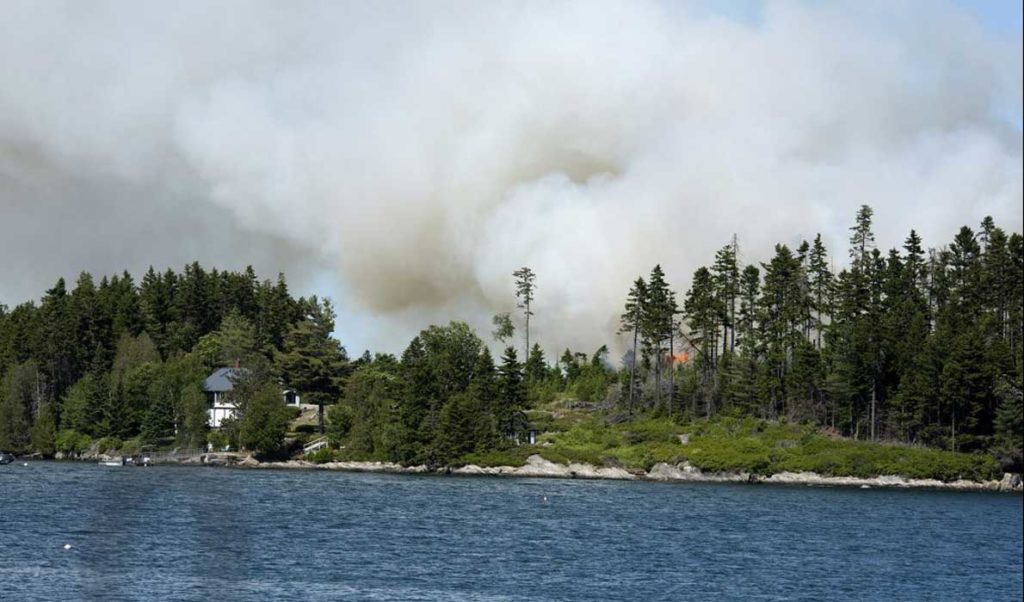