The islands are so beautiful in the late fall. Most of the red is gone, but the last leaves on the birch trees are golden and the angle of the early afternoon sun causes them to glow before they blow away in the next storm.

Migrating water birds are on the move, resembling clusters of city commuters winging their way in packs just above the water’s surface. The shores are busy with boats coming out of the water for winter storage, and lobster fishermen landing their catches at their busiest time of year.

There is a high energy in the air. Clear and sharp and so different from the hazy summer days. The winds have already started to pick up, causing occasional power outages and cancelled ferries. It will take a little more effort, flexibility, and fortitude to live here now.

Now through April, the weather will have the ability to interfere with our plans more often. It’s OK, though. I would wager that all of us who are still here in the Cranberry Isles are happy to pay the price of seasonal disruptions for the cozy quiet we enjoy when we don’t have anywhere else to go.
It was 43 years ago when I first experienced this time of year on Islesford. My brother, Steve, and I were renting a house together. We worked as sternmen for my now-husband Bruce and his brother, Mark. With fascinating jobs on the water in a place we had both loved since childhood, we were dazzled.

That fall was one of the most magical times of my life. To experience Islesford in the “off season” was a dream come true. After that, I chose to stay in Maine and my brother chose to continue his studies and become an internationally recognized geochemist at the Carnegie Institute. You can look him up— stevenbshirey.dtm.carnegiescience.edu/home. He figured out when plate tectonics started and he has even been on Nova! I couldn’t be more proud of him. Though our lives are so very different from each other, we will always have the common bond of sharing that first fall and winter on Islesford.
Our twin sons, Cameron and Robin, grew up on Islesford together. They chose separate colleges, out of state, and settled on different jobs in different locations.

For the first time, Bruce and I will have all three grandchildren living in Maine and the brothers will be just over an hour away from each other. It’s the next best thing to having them actually move back to the island. I am so very proud of both of them for choosing to raise their families in our state. As the “oldest” state in the country, we need young families to come here.
I plan to help out in Cape Elizabeth for a few days once the kids arrive. It’s the day before my column deadline and I’ve run out of writing time. I’m posting my favorite recipe from my brother to honor the bond of siblings who have experienced the darker seasons together in the Cranberry Isles. And also because it’s a really good easy recipe to make for holiday gifts. May you all have some happy family times ahead and a wonderful healthy new year.

Put 1 pound whole pecans (or any preferred nuts) in a bowl. Pour the egg spice mixture over the nuts and stir to coat nuts evenly.

Melt 2 Tablespoons butter in a cookie sheet or broiler pan. Pour coated nuts into pan and bake at 300º for one hour, stirring every 15 minutes – a few extra times during the last 15 minutes. Stir once again while nuts are cooling. The coated nuts should now be dry, not sticky.
(It’s easy to make this recipe more savory. You could cut out two tablespoons of sugar and change the spices to cayenne, curry, cumin, or whatever flavors you might like. Experiment!) 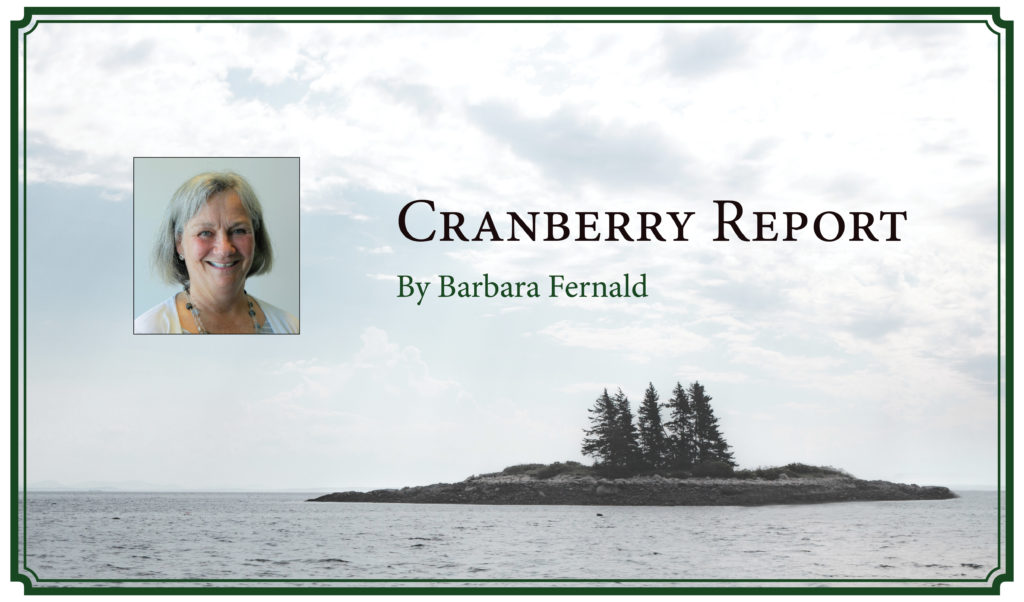