“This is like an atomic bomb, or worse,” Xiao Xingzheng wrote to me from his home in the island-city of Xiamen, China. This was in late March, when the COVID-19 pandemic was subsiding there and intensifying here. He and his own family had, luckily, escaped illness so far.

The bomb, in his simile, referred not to physical destruction, of course, but to Bill Gates’s warning in 2018 that the suffering and death in a pandemic could outstrip that of a nuclear war. At the time Xiao wrote, thousands—at least—were dead in China. Tens of thousands ill. Hundreds of millions confined in their towns and cities. At least a billion people, frightened.

Not everybody gets sick, but everybody lives in the pall of the sickness. As it is for Xiao, the COVID-19 crisis may be the weirdest event in my lifetime—with the possible exception of the military draft during the Vietnam War. When will we be able to go out safely? Will my son and grandson contract it? My wife, Bonnie, who is just off a successful but resistance-decimating year of illness? My neighbors Greg and Norma? The virus is indiscriminate, as we all know, and plans on being ubiquitous. If, when, it will strike. The worry is incessant.

You could rewrite these sentences remembering the 1960s and early ’70s. Will I contract a draft notice this week? Will my brother, uncle, or cousins? My friends Fred and Phil? The worry was incessant.

“It was ALWAYS on your mind, even if you didn’t go around talking about it,” Larry Moskowitz wrote in his recollection of life at the University of Maine in Orono for Hearts in Suspension, about Stephen King’s student days.

At peak, 500 Americans were dying in the jungle each week. You walked around with this chronic, numbing fear that your draft notice could strike any day, out of nowhere, like a virus, and launch you into the jungle too. And what would you do if, when, the draft notice came? Throw your whole life overboard, move to Canada, and become a fugitive?

You were trapped inside that fear. It was claustrophobic, like being confined inside your house. For years. Your neighbors would look at you sideways, or even go after you if you wore your hair long.

Moskowitz recounts being physically assaulted several times by self-appointed “patriots.” When your neighbors are after you, that can be more disorienting than a virus being after you.

Keith Carreiro in the same book recalls a comedian speaking at UMO’s 1971 commencement ceremonies saying, “‘If you’re not paranoid, you should be; if you’re paranoid, you’re not paranoid enough.’” Keith didn’t take it as a joke. His own bizarre experience of the draft was to be held apart naked for hours on his induction day, and then, without explanation, released.

I got lucky, too. After a couple of years of this anxiety, this paranoia, my number in the lottery came up 275. It was like a vaccine against death in the jungle.

I imagine the days following Sept. 11, 2001, were in some ways like the pandemic days now. Weirdly quiet, the background hum of traffic blank when you walk the park, as it is now. I can’t make any firsthand comparisons, though, because I was living in Xiamen then. I first heard of the attacks when Xiao frantically called me around 11 that night and told me to turn on CCTV news.

But while the 9-11 attacks were localized and momentary, the coronavirus is generalized and imminent. It promises to go on pervasively for months. It might return. In the worst-case models where no one takes preventive measures, it infects 90 percent of us and kills 40.6 million. Will it? We’re trapped in unknowing.

In the poliovirus epidemic of 1952, there were 3,145 deaths, more than 20,000 paralyzed. “I was a student nurse in 1952,” a reader from West Gardiner wrote to me recently. “Our school auditorium was turned into a ward … We had no idea about cause then and luck seemed very real. May science prevail.”

In the 1980s and ’90s, the human immunodeficiency viruses that led to AIDS frightened tens of millions of people, too. But there were no widespread community lockdowns, business shutdowns, home confinements, mass unemployment, as now.

Maybe life in this pandemic is more like life in World War II, I don’t know. In the Blitz, 40,000 Brits were killed in about eight months of German bombing. In the Blitz, like in the pandemic, you could take precautions—100,000 or more crowded into London’s shelters at night. But if, when, death would strike, there was no way to know. People put their children on ships to Australia. Trying diligently to be paranoid enough, maybe.

It is uncannily quiet in the park. People look at each other sideways. Even when we’re not talking about it we’re wondering if, when, it’s coming to our house.

“Our feelings of uncertainty may be the new norm,” Dr. Nirav Shah, Maine’s CDC director, cautioned during one of his superbly clear and human news conferences. He was announcing more deaths. Weird. Relentless. Claustrophobic. Ubiquitous.

“At the time of crisis, we tend to ponder deeply,” Xiao, the poet-philosopher wrote around the time Hubei province, the epicenter of the virus, saw its first days of no new cases.

“I hope we both go more to nature and steer our families in a right direction. We will enjoy life with compassion to glow to the moment when our bodies decay, so that others may see the light. … We will have an interesting time ahead, let us just wait and see.” 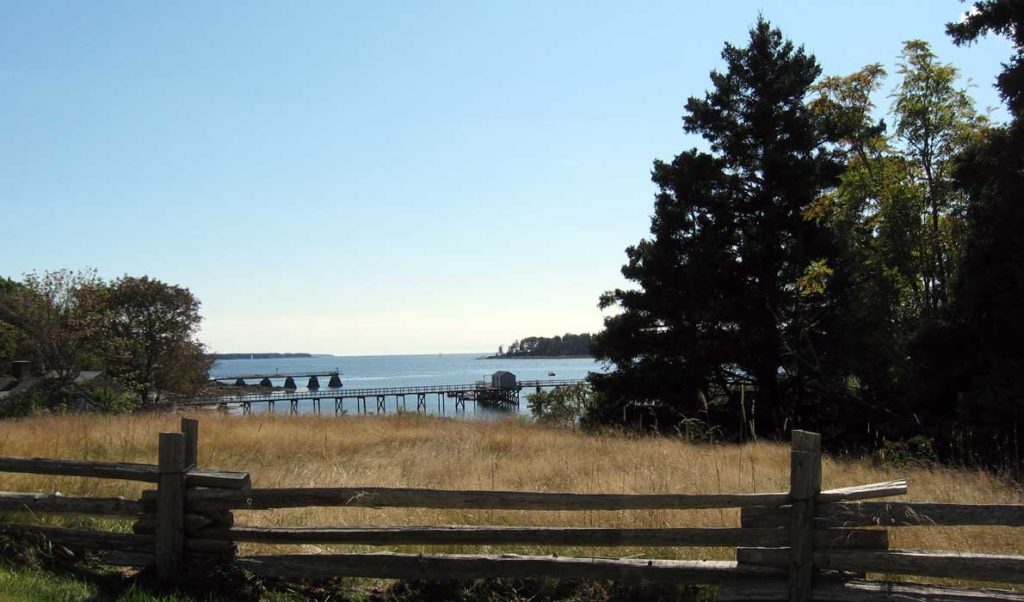 A view of Somes Sound on Miount Desert Island.