Are the radio waves from a cell tower killing fish? As odd as that question sounds, it’s being taken seriously by the Portland school system, the Portland Press-Herald reports.

The cell tower in question is on the roof of Deering High School, and a biology teacher whose classroom is below the tower alerted school officials that the fish she kept there died—repeatedly. The school has hired a company to test the level of the radio frequency emissions from the tower, which was put on the roof in 2006, the paper reports.

“According to the American Cancer Society and National Cancer Institute,” the Press-Herald wrote, “most scientists agree that emissions from cellphone antennas or towers are unlikely to cause cancer.”

The National Cancer Institute’s website notes that “to date, there is no evidence from studies of cells, animals or humans that radio frequency energy can cause cancer.”

There’s no word on whether the dead fish have been studied.

Southwest Harbor wants to spend $1 million to build a parking lot. Most of the funds would go toward purchasing a parcel across from the Manset pier, the Mount Desert Islander reports. The town’s selectmen voted unanimously to have the land appraised as a step toward a purchase. The land is listed for sale at $770,000.

“The town has missed opportunities for shore access in the past,” selectman Dan Norwood said, the paper reported.

The town’s plans would generate enough money to cover the cost, officials assert, because they anticipate offering paid parking on the parcel and believe the additional 74 spaces would allow them to rent as many as 80 more moorings in the harbor.

The land conservation group Maine Coast Heritage Trust may partner with the town on the project, the Islander noted. The plan calls for a 30-year bond to cover all costs.

And another municipal land purchase: Belfast officials “snapped up” a purchase option on two acres of land near a recreational trail being built along a former rail line that follows the Passagassawakeag River. The Belfast Republican Journal reports the move came in an effort “to keep it from being privately developed and make room for future trail amenitites.”

The property “could eventually offer a landing for kayakers,” the paper noted, while “up from the shore, walkers could leave the rail trail without trespassing on private property.” Bathrooms or some other structure could someday be built there as well.

Selectmen in Boothbay Harbor also are thinking about use of public land. The Boothbay Register reports that a piece of land where tennis courts had been located is now being considered for upgrades to improve the “gateway” to the picturesque town.

Town officials reviewed two sketches of how the parcel might be reconfigured at a recent meeting. The park-like property might have one or two basketball courts, parking and a vegetative buffer, according to plans.

“One day out from its Cadiz, Spain, port of call,” the paper reported, the ship “steered through winds of about 16 knots with swells reaching 2.26 meters at an average speed of 13.45 knots.”

The information came from the vessel’s captain, Commandant Nate Gandy, who has been blogging about the voyage, “documenting the work and play of the approximately 250 crew and staff on board.”

After leaving Spain, “rain and increasing swells” greeted the ship as it approached the Strait of Gibraltar, the paper added. While traveling through the Bahamas, Gandy noted that “The flying fish have been entertaining but our intrepid fishermen have not caught anything as of yet.”

And as the ship approached Portland in mid-June, it came to the rescue of a lone sailor whose vessel was disabled and taking on water, the Associated Press reported.

Isle au Haut resident and columnist for the Island Ad-Vantages newspaper Kathie Fiveash has won the John N. Cole award for Maine-themed non-fiction in the Maine Writers and Publishers Alliance Literary Awards. Fiveash is author of Island Naturalist, published last year (and reviewed by The Working Waterfront), a collection of columns for the newspaper.

The small regional carrier Cape Air, based in Hyannis, Mass., which operates from Knox County Regional Airport in Owls Head, just outside of Rockland, has added a summer flight to Boston to its schedule for a total of six daily round-trips flights to that city.

The Rockland Courier-Gazette reports that demand warranted expanding the schedule to and from Logan International Airport. The summer schedule is in place from June 24 to Sept. 8. The small airport is favored by many visitors to the Penobscot Bay islands.

Kennebunkport was celebrating its tricentennial on the Fourth of July weekend in 1953, and someone with some influence was able to bring the USS Knapp to anchor offshore for the festivities, the York County Coast Star reports.

The town rolled out the red carpet for the young sailors aboard, the paper says, and this late spring, “more than 60 years later, 12 crew members” and their families returned to the seaside town.

The Kennebunkport Historical Society hosted a luncheon and the group shared memories of their visit in 1953, the paper reported.

“The men, all in their 80s and 90s, were teenagers just out of high school in 1953, and many of them had never seen the ocean before joining the Navy.”

Pete Smith, one of the visitors returning, remembers Kennebunkport residents welcoming them into their homes in 1953, “and hosted parties, softball games, a parade and a dance” for sailors.

“The mothers hosted a dance for us, so I guess they trusted us with their daughters,” Smith joked.

Smith speculated that Prescott Bush, father of George H.W. Bush, may have been the influential official who convinced the Navy to send the ship to town. 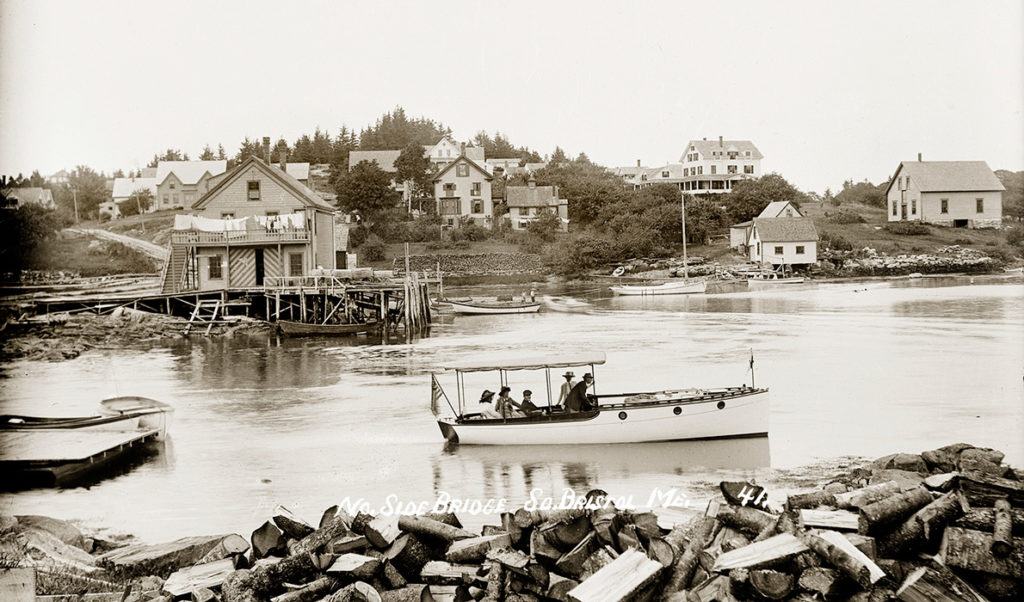 A schooner sails past the tanks in South Portland on a late May Saturday.