Inhaling the salty smell of the sea, feeling the wind blow across your skin, hearing the calls of seabirds and crashing surf—there is nothing like standing on the catwalk outside a lighthouse’s lantern room.

Before this summer, you had to actually climb the tower stairs of a bona fide lighthouse to experience what it was like to stand outside its lantern and look out to sea. But not anymore. Thanks to a new permanent exhibit at Maine Maritime Museum in Bath, you can have that experience without being at a real lighthouse.

Within a newly constructed gallery, the museum has erected a full-size replica of the lighthouse lantern of the east tower of Cape Elizabeth Light, known, along with the deactivated west tower, as Two Lights. A three-year capital campaign raised $980,000 for the design, construction, and installation of the exhibit.

The museum’s lantern was built to publicly display the east tower’s second order Fresnel (pronounced freh-nel) lens, originally installed in the tower in 1874. The lens was removed in 1995 and put on display at Cape Elizabeth’s town hall until 2013, when it was transferred to the museum’s collection for eventual display, said Chris Hall, the museum’s curator of exhibits.

“I wanted it set up in an engaging way,” he said. “I thought it was important to have it be an immersive experience of being there.”

To that end, “Into the Lantern: A Lighthouse Experience,” doesn’t just put the Fresnel lens in a static display case. The historic lens rotates on a replica pedestal, reflecting and projecting the light from an LED lightbulb.

The light spills out into the hall and exhibit space neighboring the new exhibit and marches across a 180-degree screen curving along the back wall of the exhibit space. A projector mounted from the top of the lantern frame beams a panoramic time-lapsed film created by Portland-based True Life Media.

The eight-minute film is the result of a year’s worth of filming from a window in the east tower in Cape Elizabeth. As you stand along the curved metal railing between the lantern and the screen, watching the year’s storms, sunrises, sunsets, and passing seasons, you feel air blowing on you and smell the ocean’s salty air.

These sensations and perceptions are not figments of your imagination. A fan is positioned above the catwalk and a custom-blend sea scent is diffused through the air, said Katie Spiridakis, the museum’s marketing and communications manager, to help visitors feel as if they really are standing outside a lighthouse lantern.

At first glance, with more than 60 lighthouses in Maine, a museum immersion lighthouse experience seems unnecessary, but as the exhibit’s curator points out, most of those lighthouses are not open to the public, or are open only at specific times – such as for Maine Open Lighthouse Day – and not everyone can climb the often steep and winding steps into a lighthouse’s lantern room.

The lighthouse tower the museum’s exhibit replicates is privately owned and not open to the public, so standing on its catwalk isn’t an experience most people can have. The museum’s exhibit, which is on one level so no climbing is required, is accessible year-round.

The exhibit also offers visitors a history of Two Lights, an explanation of the technology of Fresnel lenses and glimpses into the life of lighthouse keepers and their families.

Conveying the significance of Two Lights was an important part of what Hall and his team wanted to do with the exhibit, he said. “We really wanted to get that closer to people,” he said. “It sounds simplistic, but sometimes simple carriers you farther.” 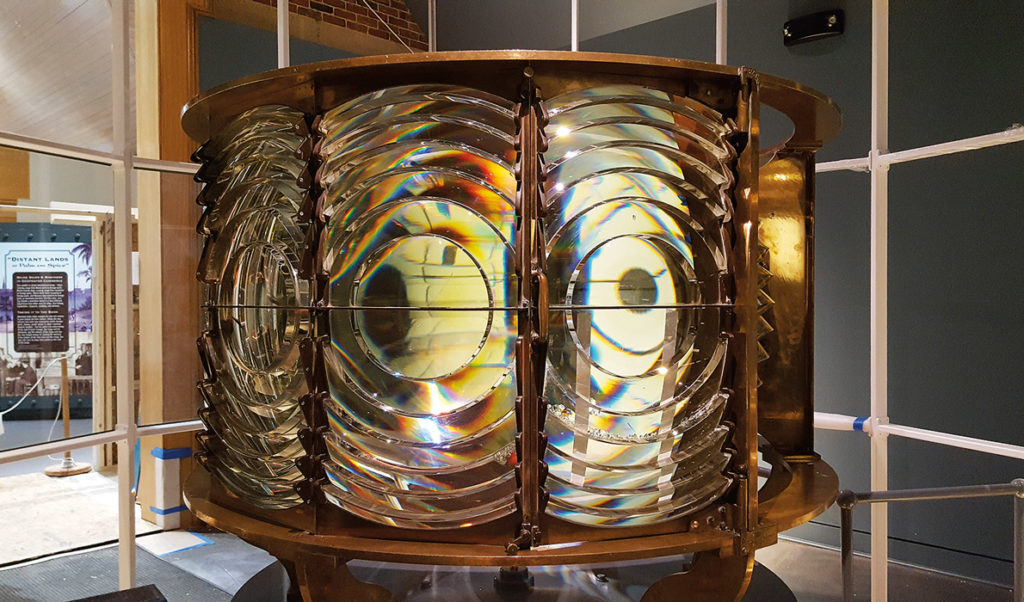 A Fresnel lens on display.