Hotels, motels, and inns along the Maine coast, many of which have shuttered their windows for the season, have varying reports on how well their businesses fared over the spring, summer, and fall.

Some said occupancy rates and stays were higher and longer than ever before and attribute a measure of that success to third party bookers, such as Airbnb, booking.com, and hoteltonight. An occupied bed even at a reduced price is always better than an empty one, according to an industry maxim.

Others say their bookings ranged from very good to consistent with the prior year, while one owner said the smaller than expected IRS tax rebate and competition from third party bookers has hampered his rate of occupancy.

Angie Amato, operations manager for Nebo Lodge and restaurant on North Haven Island, said its 13th season was “pretty average.” The lodge has seven guest rooms and two suites. Amato said Nebo had vacancies early in the season from the end of May through June. The inn was fully booked July and August. And, again, there were sporadic openings in the fall.

“We could use more business on the shoulder seasons,” said Amato. Most guests booked ahead—she is already booking rooms for next year—while others made last minute reservations.

The summer season at the 17-room Motel East in Eastport, according to owner Owen Lawlor, got off to a slow start and then was consistently busy through the height of the season and into the fall.

“It started late but ended up good,” he said of the year-round business. “It was winter up here into June.” Lawlor said guests generally stay one to two days. He did see more people traveling on business.

A new Beatrice Rafferty School is being built on the Passamaquoddy Reservation and a major study is being done of Eastport Municipal Airport.

“We also get an awful lot of Mainers,” as well as visitors from out of state, particularly the Midwest, Lawlor said.

Derecktor Maine LLC rents three houseboats from the marina in Georgetown. The accounting manager, Warren Harbison, said the business, which is a decade old, has a three-night minimum stay, although there are regular guests who rent a houseboat for one week each year.

“It’s been very nice, very steady since we put them all in the fleet,” said Harbison. The season runs from about mid-June to Labor Day. “The shoulder seasons are rough here” on the water, he said.

The York Harbor Inn has more than 60 guest rooms. The inn saw an increase last year and even more bookings this year. Guest Manager Paul Gagnon said the inn, which is open year-round, traditionally sees dips after Columbus Day, but that was not the case this year.

“Exceptional would be a good word,” Gagnon said of the summer and fall business. “We had nearly a full house, even on Tuesdays and Wednesdays. It was very exciting.”

He attributes the ever-increasing bookings to beautiful fall weather, although he said June got off to a slow start because of the rain. “But once the season came, July, August, September, and October have been incredible months,” Gagnon said.

Another new and favorable development, he said, is that many guests come for one or two nights and then extend their stay. The inn also took in travelers who ran into gridlock on Interstate 95 and got off the highway and spent the night, said Gagnon. Third party reservations through agents such as Airbnb, booking.com, and hoteltonight are indispensable for exposure and last minute reservations.

“And then we have to give credit where credit is due,” Gagnon added. “And those are our traditional, loyal, returning guests. Many stay for four or five days, year after year, and love their same room. That’s our base point.”

Although most hotels and inns reported about the same number of European guests as in prior years, Gagnon said he did see many more Europeans in the fall. “I have found in the last month and a half that I am saying ‘Cheers’ and ‘Brilliant’ over and over again,” he said.

Business at Llangolan Inn & Cottages in Bar Harbor was “peculiar,” said owner Peter St. Germain. “The occupancy level was down for May and June and July compared to last year,” he said. “August, September and October were pretty much on pace for the last year.”

His year-round business, which has lodging for 56 people and closes the cottages in the winter, has been operating for 14 years. There was more at work behind the season’s underwhelming beginning than a rainy spring, he said. “The two largest contributing factors to the slow start are, one, the advent of Airbnb and online transient accommodations, and the change in tax laws,” said St. Germain. His guests typically are traveling on a budget and did not receive the tax rebate they had hoped to get.

“The shift in tax laws had a profound effect, at least for young families, in May, June and July,” said St. Germain.

Tim Prosser, general manager of the Rockland Harbor Hotel in Rockland, said the 82-room, waterside hotel had a great season. “It was what we expected and a little bit more,” he said of the hotel that opened in 2016. Most stays at the year-round hotel average two nights and the occupancy rate is steadily growing.

“We’re kind of up to full speed, which is where we will remain for the foreseeable future,” said Prosser.

Glen Sanokkis, manager of the seasonal Chebeague Island Inn on Chebeague Island, said business was down slightly this year because of the spring rain. The 21-room inn is open mid-May to mid-October.

“It was raining about every day,” he said. “That was a big chunk of why we were off from last year.”

Sanokkis said the average stay is about two days; however, he is seeing a small trend of guests, many younger and on their honeymoon, using the inn as a home base and staying one week while making day trips to Portland and Freeport.

“That’s not common because we’re on an island and it’s a travel expense,” he said of the ferry. “They like what we have—an unplugged, relaxed stay. They sit on the porch and read books.” The inn has WIFI, but no telephones or television. 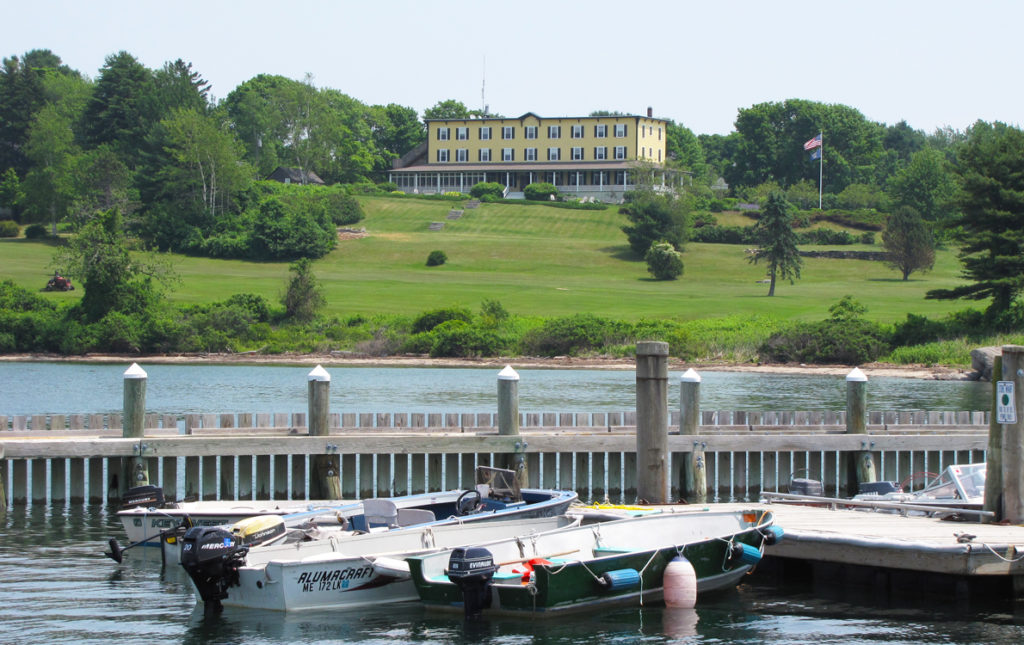