Recently, I learned that pollock is underappreciated in Maine, and probably elsewhere, too. Poor old pollock; that has been its life story.

The main problem with pollock is and has been that it is not cod, haddock, or salmon, and it’s a tad gray or blueish, and not pure white. Still, in the 1800s and early 1900s, it was among the top 40 of favorite fishes appearing in American cookbooks and one can find it today in fish markets and the seafood departments of chain food stores.

I like pollock. It is fine in chowder; good baked with a mixture of mayonnaise and mustard spread over the top; or baked and served with a salsa of tomatoes, peppers, onions, and capsicum heat.

Mainly, pollock is susceptible to all kinds of added flavors because like most whiteish fish, it doesn’t have much flavor of its own. Well, not much that I can detect. It definitely isn’t “fishy,” which I would think would be its chief positive attribute.

For those of us who live on Maine islands, most of the fishermen we know catch lobsters, not finfish. My friends who fish for fun manage fine messes of mackerel, squid, and, occasionally, striper. At least once a summer I get to enjoy mackerel rolled in cornmeal and pan fried for breakfast, or grilled mackerel for supper. Yum.

Otherwise, most of us catch our fish in the market. That’s where we face a baffling array of many kinds of salmon; fish labeled FAS (frozen at sea); and abundant assurances that what we see is local and sustainable, though I usually approach all this with a wad of skepticism in my back pocket.

Where exactly is the locality of “local” and how is sustained defined? And then, since salmon caught in North America is shipped to China to be processed then shipped back to the U.S. for sale, one has to wonder what in heaven’s name has happened to that fish en route. What is up with that scenario?
(This happens with chicken, too, and yet the U.S.D.A. wants us to believe that the chicken we buy is safer if inspected by their inspectors, rather than killed and butchered on a local farm where we inspect with our own eyes and nose. More on this food sovereignty issue another time.)

As for pollock, apparently it’s still abundant among the kinds of fishes available to us and a perfectly good source of finny protein. Here is another very easy way to fix it.

How to Make Fish and Potatoes:

Wash and peel at least one medium potato for each person in your crowd. Acquire about half a pound of pollock (or other whiteish fish) per person, or more or less depending on personal preferences and appetite. Cut the potatoes in half and put in a pot with only enough water to cover. Cook until they are fork tender.

When the potatoes are done, lay the fish on top of the potatoes and cover the pot, steaming the fish until it is opaque and flakes apart. Gently drain the whole mess, saving the water to use for building a chowder on another day. Get out the old family potato masher and mash the potatoes and fish together. Serve with melted butter on it and salt and pepper.

If you have the time and ambition, consider cutting up a couple of onions, frying them in oil, butter, or bacon fat, and putting them on top of the fish and potatoes. Ketchup, chile sauce, or some species of hot sauce is suitable adornment.

This is an agreeable dish. Leftovers may be fried up as hash, or formed into little cakes and fried, suitable for breakfast or supper. Plop an egg on top, if you like.

If I understand this correctly, when we buy and eat a certain kind of fish, then fishermen bother to catch them. If we do it enough, then we overfish a given species. So pollock is pretty abundant now, but, if we just get busy, I bet we could deplete the stock of it, too. 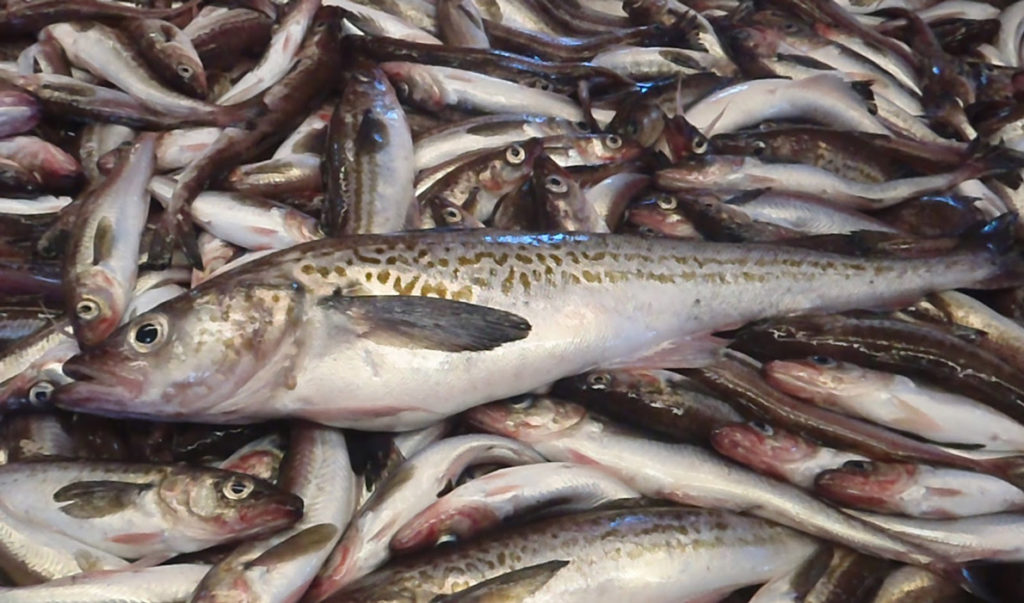