As I write this, I’ve just started rehearsals for the Waterman Community Center’s summer production of Annie Get Your Gun. I’m Annie. Along with the requisite singing, dancing and acting, the show requires a certain comfort and familiarity with guns.

Although I grew up in rural Maine, my urban parents raised us to largely fear and disdain firearms. We were vegetarian, so hunting seemed barbaric. Even marching band was too militaristic for us.

Gun culture seemed the provenance of the guy down the road who stockpiled weapons in his cellar and bit a selectman on the ear at town meeting. As an angsty teenager, I scrawled a poem describing in gory detail a deer hanging from the weighing station at the Mt. Vernon Country Store. My relationship with guns was neither comfortable nor familiar.

Now that I’m back in Maine, out on North Haven, my stance on guns has evolved. Out here, though road signs are regularly marred by pot-shots, the majority of gun owners and users are responsible and safe. Hunting, when practiced within the bounds of the law, is an excellent alternative to buying factory-raised meat, and even I can see that our deer population has reached the nuisance level (especially when they rampage my tomatoes each August).

Kids take hunter-safety courses at a young age, and are raised to respect weapons. I once asked middle school writing class students to use a precious object as an inspiration for an essay, and the half of the class that didn’t write about their boats wrote about their guns and the first time they bagged a deer. I can’t in good conscience dismiss that island rite of passage.

As part of the rehearsal process for Annie Get Your Gun, the director suggested we go shooting. She envisioned paying a fee to visit a shooting range. “We’ll just get some friends and go to the sand pit,” I explained. She was taken aback. In New York City, she explained, if someone posted a Facebook picture of themselves with a gun they were likely to get un-friended.

Friends on a Facebook parenting page recently posted a question: do you let your kids play at friends’ houses if their parents own guns? Most replied vehemently no, and that they even ask parents whether they are gun owners before allowing their children to visit their houses. These friends live in cities and large towns, where a gun might be acquired as a means of self-defense, and therefore might be more accessible and pose a real threat to a young child.

I thought about the question myself, and wondered how many houses our daughter Penrose might be able to visit if we followed the same rule. Two? I have absolute trust, however, that the gun-owning families she might befriend are safe and secure in their gun storage.

Hunting season is short, and generally those who engage in recreational target practice are smart about it. In fact, eager to indoctrinate my gentle, gun-less father and brother-in-law, some friends organized a target shooting expedition for them during my baby shower. They had, pun intended, a blast.

I’m still no Annie Oakley, except on stage. I wouldn’t say that I’m comfortable with firearms, but I’m more willing to accept them as a part of some people’s lives, especially in rural areas. I think it should be as hard as possible to buy one, and once you have one I think it should be kept as securely as possible—fingerprint lock, retina scan, you name it. But for those willing to follow the rules and keep themselves and others safe, I now respect hunting and marksmanship as part of our culture.

Courtney Naliboff is a writer, musician, actor and teacher who lives on North Haven with her husband and daughter. 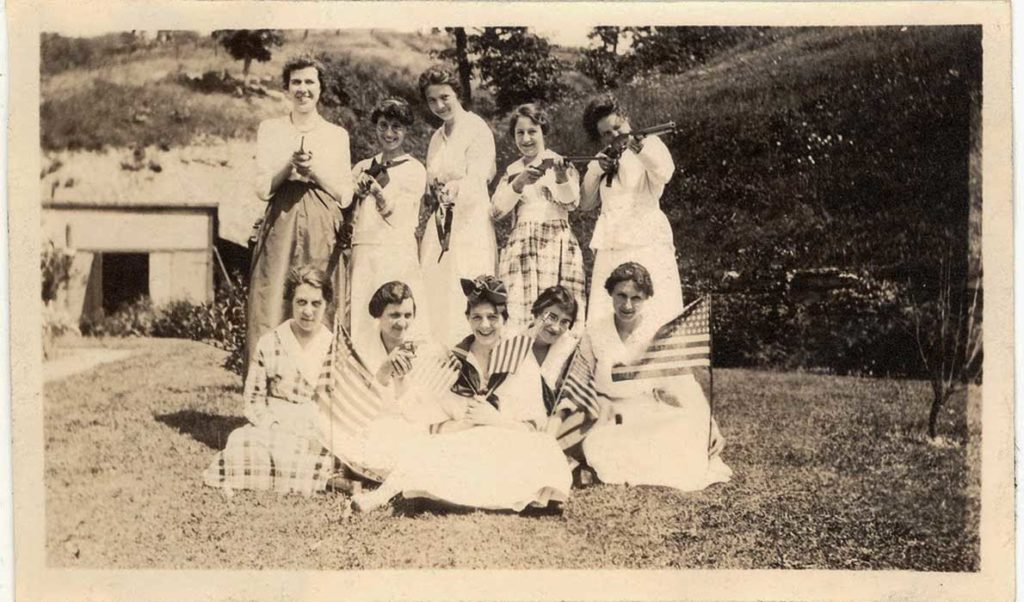