Some 20 years ago, a weather-related disaster struck a small town in South Dakota, and officials wanted to reach residents with emergency information. The five radio stations heard in town were programmed remotely, pulling in music and talk via satellite dish, and so were useless in the emergency.

That scenario, explains Neal Harkness, a city councilor in Belfast, led the Federal Communications Commission (FCC) to create a new category of radio station—the low-power FM station, typically 100 watts or less. The FCC faced strong resistance from commercial radio stations, but finally relented, and now there are three such stations in Maine.

The latest is Belfast’s WBFY, at 100.9 FM, though likely only able to be heard within five or six miles of the downtown. The station also will stream its programming on the internet.

Radio programming beamed in from afar—often to scores of stations across the country—has been the norm for years, and it may make sound economic sense. But there remains a demand for local radio, Harkness said.

WBFY went on the air on Dec. 17, but the story starts seven or eight years earlier. Amanda Cushman, who works in the Belfast city manager’s office, had received an FCC notification that applications for low-power stations were being accepted.

“There’s a window when you can apply for these,” Harkness explained, “so she filed it.” In what was a bit of a surprise, the city’s bid was accepted, but a lot of work lay ahead.

Meetings were held, interest was expressed, “But it petered out a few years back,” he said. When he was elected to the city council in 2014, Harkness—who had been hosting a show on the Orland-based community radio station WERU-FM—asked city staff, “What happened with this radio station idea, what happened to this opportunity?”

What he learned was that the clock was ticking. FCC regulations dictated that the station had to be on the air by the end of January 2017. After more than a year of meetings, at which one group would express enthusiasm then not return to the next meeting, followed by another group, a core group finally took hold. This group included Peter Dalton, who worked for Belfast’s last commercial station, WBFT, and Jennifer Hill, Zafra Whitcomb, Patrick Walsh, Erik Klausmeyer and several others.

Much of their efforts were geared toward raising funds, and they succeeded. Among the big donors were an anonymous person who gave $20,000, along with businesses like Bangor Savings Bank and 20 other Belfast businesses and organizations.

“The city is the license holder, but the city doesn’t want to be the license holder,” Harkness said. The plan is to create a nonprofit and transfer the license to that organization. A board of trustees is being formed, bylaws are being drafted, and the organizers want public input on this and more.

The fun part of building the station, though, is creating the on-air content.

“We want this to be sort of the embodiment of Belfast,” said Klausmeyer, who also is long-time programmer on WERU. “We want it to be whatever folks who volunteer want to make it.”

He anticipates much of the programming will be music, in part because it’s easy to produce. When there is no on-air host, the computer plays selections from the 5,000-song iTunes library.

But Klausmeyer also imagines broadcasting live musical performances; being on-hand for local theater, festivals and other events; offering children’s shows; public affairs discussions with a host taking calls; city officials soliciting opinion on issues. With the internet, shows can be archived and available at any time, as well as be rebroadcast.

“It’s a blank canvas,” he said. The plan is “to curate the space for the community to come in and use.” 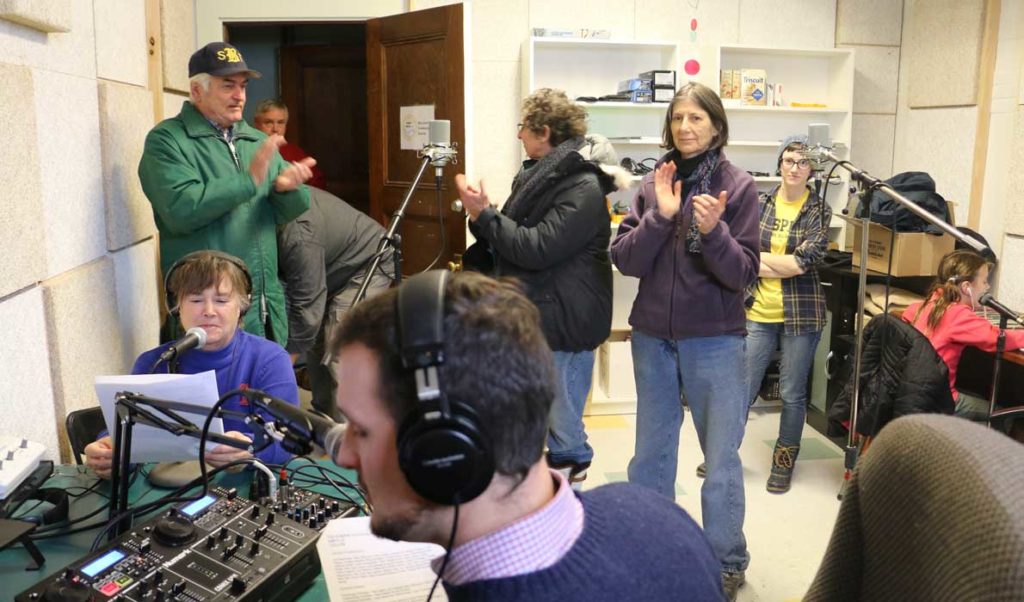