When your community’s electric rates are among the highest in the nation, it pays to consider ways to cut consumption.

Work done on Monhegan Island, with help from the Island Institute (publisher of The Working Waterfront), was both simple and effective, and could reduce the island’s collective annual electric bill by $15,000.

Island leaders think a lot about electric use, given that they pay 70 cents per kilowatt hour.

Monhegan resident Chris Smith visited the islands of Naushon and Cuttyhunk off the coast of Massachusetts in the spring of 2014 to learn about energy work done there. Those islands, explained Ben Algeo, who is serving as the Island Institute’s “energy fellow” through the nonprofit’s Island Fellows program, looked at appliances to achieve savings.

“They swapped out refrigerators,” Algeo said of those islands.

Returning from the exchange, Smith and Matinicus Island resident Clayton Philbrook, both working on behalf of their island power companies, asked Algeo to consider conducting an inventory of island appliances. About 40 of the refrigerators were found to be over ten years old, Algeo said, which could mean they were performing at less than peak efficiency.

But the inventory also found that about 40 percent of the light bulbs on the island—in homes, rental cottages, inns and restaurants—were incandescent. Replacing those bulbs brings substantial savings—swapping a 60-watt incandescent for an LED that produces the same amount of light means using one-fifth or less electricity.

The Island Institute worked with Gilman Electric of Rockland for the planned bulb replacement, and the company was able to have a sales representative from Sylvania, the manufacturer of the bulbs, attend an information meeting on the island.

“A lot of it was just getting people to understand what it is,” Algeo said of the meeting, held in May.

The quality of light produced by LEDs was a concern for many, including art gallery owners. Early on in their development, LEDs gave off a bluish light that many people found unattractive. They were then sheathed in yellow plastic to offset the blue, but now bulbs giving off various shades of light are available.

Algeo spoke with island homeowners, business owners and caretakers about the planned switch-outs, and pretty soon, almost everyone was on board.

Compact fluorescent bulbs (CFLs) have been the energy efficient choice for the last 15 years, but many have found they don’t perform well in damp environments, they take time to come to full illumination in cold air, don’t last as long when frequently turned on and off, and their disposal is a problem because they contain mercury.

This is why LEDs—which use light emitting diodes—have become the preferred choice. Not only do they use a fraction of the electricity of incandescent bulbs, but they last decades and give off little heat.

After those on Monhegan agreed to the plan, some 2,300 LEDs were ordered through Gilman Electric, Algeo said, which offered a generous discount with the bulk order. The Island Institute and other sources contributed approximately $5,000 in funding to cover transportation costs to the island and further mark down the price of the bulbs.

Sylvania was chosen as the brand, he said, because “We wanted to give people a quality product.”

In the island hotels, staff switched the bulbs, as many as 300 per business.

“I was in the church two or three days,” Algeo recalled, as homeowners and caretakers stopped by to pick up their orders. He also delivered some of the new bulbs, and gathered up and disposed of the incandescents and recycled the CFLs.

The project was a lesson in how people will embrace practical energy conservation, he said.

“It was just cool how quickly people picked up on it,” Algeo said. “People were excited about it.” 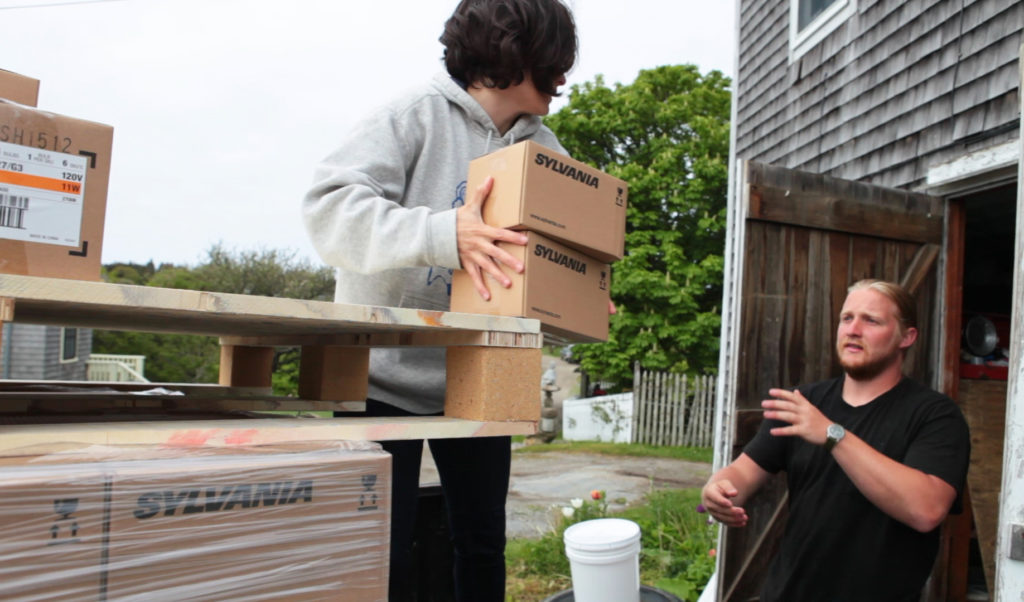