House Island in Portland Harbor is, and has been, many things: an early European fish station, site of an early 19th century fort, a quarantine facility in the early 20th century.

Today, developers are moving toward using the southwestern portion of the 24-acre island for a luxurious camping experience. The business, operating as Fortland, won a “certificate of appropriateness” from Portland’s historic preservation board on Feb. 21.

The plan, explained Fortland’s Travis Bullard, is to work toward the necessary city and state permits through the spring, with a “soft” opening this summer. Camping, with six yurts and 15 canvas-and-timber tents, secured in the stone ramparts of Fort Scammell, would be available in earnest in 2019.

The experience, Bullard said, will have campers entering into their own, individual, private site, offering “beautiful, epic views” across the harbor. The business is committed to “preserving, protecting, and celebrating the island,” he added, with such sustainable features planned as solar power, rain catchment, and a drip-irrigation wastewater disposal system.

Stefan Scarks is one of the principal owners of the business, Bullard said, which is in the process of taking over the development project from the Scarks family’s earlier business, Neptune Properties.

Given its proximity to the city’s waterfront—just a few minutes, by boat—it’s easy to understand House Island’s storied past.

While no formal archaeological projects have been undertaken there, scholars believe the island, like many others on the Maine coast, was probably visited and used by native people as early as 4,000 years ago. Europeans probably began using the island by 1623, according to a historical summary by the preservation board, and by the early 18th century it was being used for fish-processing activities and some subsistence farming. At that time, the island was owned by the family of George Munjoy, who had also owned the East End of the Portland peninsula, providing the local place name Munjoy Hill.

The island had a series of private owners into the 1800s, who used it as a base for fishing and fish processing operations. A lobster pound is thought to have been operating in the cove on the east side of the island as early as the 1850s, though the lobster fishery in Maine was of little commercial significance until around the 1880s.

The U.S. government bought the southwest end of the island in 1808 to build Fort Scammell, a piece of the project to fortify the coast against aggressions by British ships in the wake of the Revolution. The batteries at Fort Scammell faced east toward Whitehead Passage, between Cushing and Peaks islands, and southwest toward Fort Preble in South Portland, helping protect the narrow entrance to Portland Harbor between the mainland and Cushing Island.

In 1892, amid concerns over contagious diseases being brought by ships carrying immigrants from Europe, Portland built an inspection and quarantine facility on federal land adjacent to Fort Scammell. By 1902, the U.S. government took over the facility from the city, renaming it the U.S. Hospital, Quarantine and Immigration Station on House Island. Through the 1920s, House Island helped deal with the overflow of immigrants arriving at New York and Boston, and was nicknamed Ellis Island of the North.

Harry Gratwick in his book The Forts of Maine says the government also used the island as a transfer area for arrested bootleggers in the 1920s. The feds’ use of the station declined in the 1930s, and Gratwick says the fort structures were believed to be a site for fraternity hazing activities by Gorham State Teachers College students. Pledges were thought to be taken into the abandoned dungeons of the fort to be frightened. In 1937 the federal station was closed and put up for sale.

In 1948, retired Navy Capt. Lincoln King bought Fort Scammell for $1,200. In the early 1950s, Hilda Cushing, a Portland native and real estate developer, became concerned about King’s plans to dismantle the fort and sell the granite to the Army Corps of Engineers for construction of the Spring Point breakwater across the way in South Portland. She persuaded King to sell her the southwest half of the island, including Fort Scammell, by 1954. In 1955, she bought the other half of the island, including buildings used by the immigration station, from Stanley Pettengill.

The Cushing family remained in control of the island, including offering summer tours and lobster bakes, until selling it in 2014. In 2012, Greater Portland Landmarks, concerned about the lack of formal protections for the historic buildings and fort, added the island to its list of “Places in Peril,” which helped set in motion the city’s move to name it a historic district. 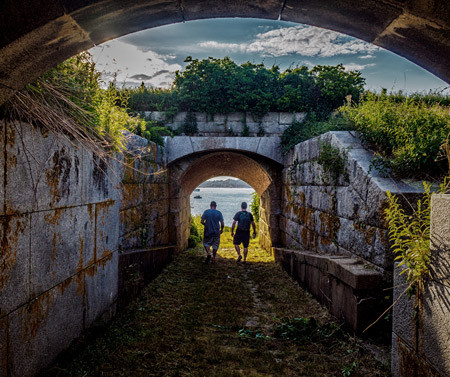 A view from inside Fort Scammell.

Developer Michael Scarks bought the island in 2014 in two pieces, and later that year sold the northeastern half of the island to Christian and Vincent Mona of Florida. Efforts then began to turn it into a vacation attraction.

The next year, the Monas put their half of the island up for sale for $6.9 million, but subsequently removed the listing. They revamped buildings that were part of the old immigration station and built a new boat dock, and plan to rent the facilities out for weddings and retreats, according to news reports. A revamped turn-of-the-century house on the northeast end of the island was listed online for sale for $6.4 million in mid-November. 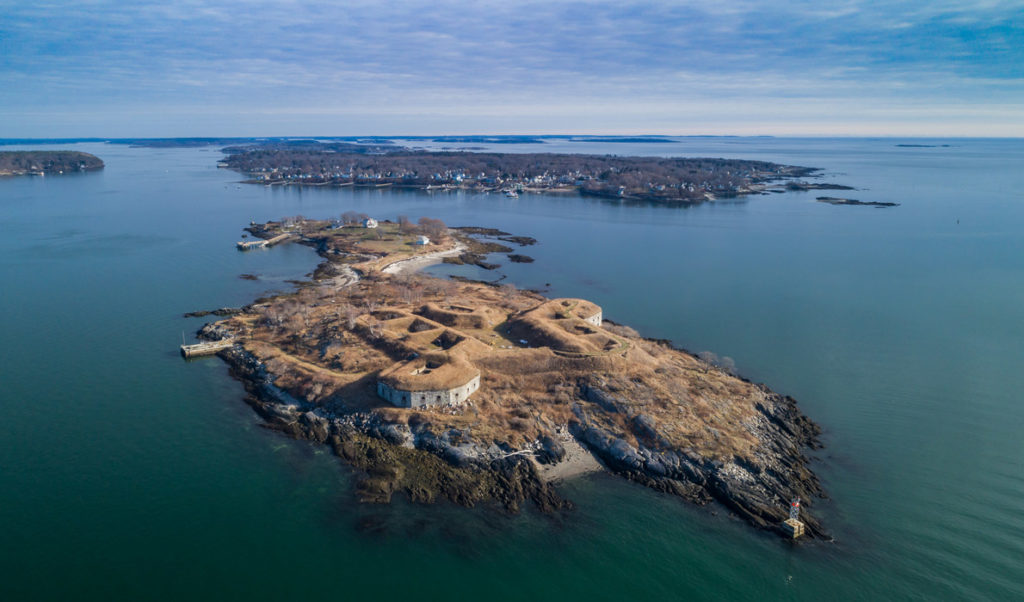 An aerial view of House Island.