Note: This is the first in a three-part series recollecting the look and feel of Portland in the 1960s, ’70s and ’80s by a Maine writer who spent his youth there.

About 5 a.m. around the first of December 1977, I was standing in streetlight shadows on the corner of High and Spring Streets in Portland. It was cold. Behind me was the Greyhound Bus terminal. Across the street was the infamous Cremo’s Cafe, where I had sat one afternoon a year or two back, drinking beer with friends, listening to a garage band and getting heckled from the stage by a guitar player who I believe was offended because I was talking during his inter-song monologue. The guitar player was Tim Sample. That was my only experience at Cremo’s.

Anyway, I was standing there in the silvery city pre-dawn, just off the bus from New York City. Across High Street loomed the Libby building’s west wall. The clock turret on the Schwartz building at Congress Square looked completely new to me, though I had seen it often. The State Theater in its pornography phase was across Congress, and on the other corner glowed one of the seediest Dunkin’ Donuts shops east of the Piscataqua River.

My God, I thought. I can’t believe it. I love this city. I love Portland so much I can practically taste it.

This was after two months of hitchhiking around England and Ireland with a green canvas knapsack bought at the Surplus Store. The return took me through the New York Port Authority and home.

This frigid December morning was my epiphanic first adult experience of it.

Even though I had grown up thereabouts. Or really, because I had. In the mid-1960s, when I stumbled groggily into my teenage years, Portland looked and felt exactly like myself —dull, disaffected, disconnected and backwatered from the turbulent reality that seemed to be percolating in faraway everywhere else. New York, Europe appeared to be in perpetual eruption, while Portland—I—stewed in stagnation at the dead end of the line.

In the 1960s, you have to remember, Commercial Street still stank of the fish meal plant, and traffic barreled unencumbered by rules of the road over cobblestones and bone-rattling railroad tracks. The Old Port was a seedy maze of turn-of-the-century brickwork and waterfront dives.

I’m sure that even in 1966, there were people who could see grown-up possibilities for 1970s Portland. I couldn’t. For us, downtown was simply an escape from the even duller suburbs.

On Saturdays a friend and I took the bus from its terminus at Pond Cove shopping center in Cape Elizabeth to Congress Street. We spent bleak afternoons in 10-cents-a-string bowling alleys with warped lanes underneath buildings on Preble and possibly Casco Street. We wandered up and down Free Street and Congress, in the W.T. Grants and Porteous stores, ate expensive 35-cent hamburgers at the Valle’s proto-fast-food diner two doors down from Oak Street, bought Old Golds at the smoke shop near the Surplus Store and Benoit’s clothing store. Cars still trundled around Our Lady of Victories, then.

On the corner of Oak and Congress was a narrow brick building that housed the dim, dusty, attic-smelling Paperback Book Store. Crammed on wooden shelves and stacked on the floor were thousands of 50- and 75-cent paperbacks, with pages discoloring before they left the bindery. Behind a high counter was the proprietor, whose name might have been Melvin, or maybe Maurice. He wore a loose-fitting white shirt with the sleeves rolled up to the elbows. His black hair was greased back in the ’60s style. He spoke brusquely.

For hours, I scoured his science fiction stacks. Philip K. Dick. Isaac Asimov. Raymond F. Jones. I recall Melvin trying to chat with me, but my expanding denial of adults and their afflictive versions of reality made me, regrettably, unresponsive. About 1969, he moved his shop down Congress near Porteous, in a larger space whose metal racks I found too impersonal to browse with the same absorption.

Up from Oak at Record Mart, we bought 45s (“Homeward Bound,” “Hello, Goodbye,” “Eve of Destruction”), and across the street at Recordland, albums (Aftermath). Ruthie, the matronly, hippie-garmented proprietor, spoke to us with shocking warmth. I had no idea how to reply to that, either.

On the Recordland side of Congress, we visited the Hobby Center to pore over miniature HO electric cars. You could take the narrow stairway up there to the second floor, or the thunking slow-motion elevator operated by a disabled man who could not speak clearly and held one withered hand awkwardly in front of him. I felt ashamed one day after we manfully made fun of him, and after that took the stairs. Donald Conant, he turned out to be.

A couple of years farther on, in 1968, I went to the movies on Saturday afternoon with my girlfriend in the State Theater when it was still the second-most-respectable movie venue in town. We huddled in the red cushion seats at the back, paying little attention to the movie. Later that year, two friends and I went to the more artsy theater (at least, so we understood), The Empire, near the Portland Public Library and the Splendid restaurant, and came out two hours later with our teenage psyches completely blown by 2001: A Space Odyssey.

Our desire to escape the backwater took us wide-eyed to the Boom-Boom Shop, located on a block of tenements which I believe no longer exists off Federal Street. A phantasmagoria of black-lights and posters, sweet odors camouflaging floorboard smells, and strange-looking hardware that hippies knew how to use. A short walk farther east took you to Pearl and Franklin Streets, which I recall as building-crowded neighborhoods then, though by 1967 urban renewal was  clearing space thereabouts with a vengeance. We ventured to India Street to buy sandwiches at Amato’s, but the Italian neighborhood there was to us the boundary of notoriously rough Munjoy Hill. We did not go that way. Though of course, the residents did not see it like that. My friend in later years Peter Morelli recalled falling asleep in his grandmother’s house on Newbury Street to the banging of the iron foundry a few blocks away.

Back downtown, across from the theaters, another countercultural gathering-place, The Gate, was steeped too deep in drug lore for me to dare. But in 1969, two friends and I skipped school to join an anti-war march down Congress. (“So now you want peace,” my father sneered afterward.) Had the real world come to Portland? The long-haired people sitting defiantly on the City Hall parapet listening to angry speeches made through a feedback-addled PA system made it seem so.

By 1970 we were driving our own cars into town. To the Thursday night fights at the Expo—Pete Riccitelli and Eddie Spence battling for a light-heavyweight title, while Expo Eddie, the facility’s famous handicapped denizen, ambled around the ring. Trips to Portland’s first McDonald’s on St. John Street. An afternoon at Deering Oaks to hear The Bob Seger System blast music through giant silvery state-of-the-art ventilation ducts out to us on the grass. Dumbstruck in the Expo bleachers transfixed by mythical Jethro Tull.

In the fall of 1971, I tumbled into my rocky first semester at the University of Maine at Portland-Gorham (UMPG, colloquially known as Umpa-Gumpa). “Wake up Maggie, I think I got somethin’ to say to you.” Tuition was $175 a semester. The dirt parking lot down Bedford Street from Luther Bonney Hall seemed like a desolate, chthonic place. I parked in it every day.

Maybe you grow up when you realize you’re not chained to the place you suffered your adolescence, but bound to it by love. That shocking morning in December 1977 was unimagined light-years in the future.

Next month: Portland and the rise of the Old Port in the 1970s.

Dana Wilde of Troy is a columnist, editor, Fulbright scholar and former college professor. He writes the Backyard Naturalist and Off Radar columns for the Kennebec Journal and Morning Sentinel. His next collection of writings on Maine’s natural world, Summer to Fall, is due out later this year from North Country Press. 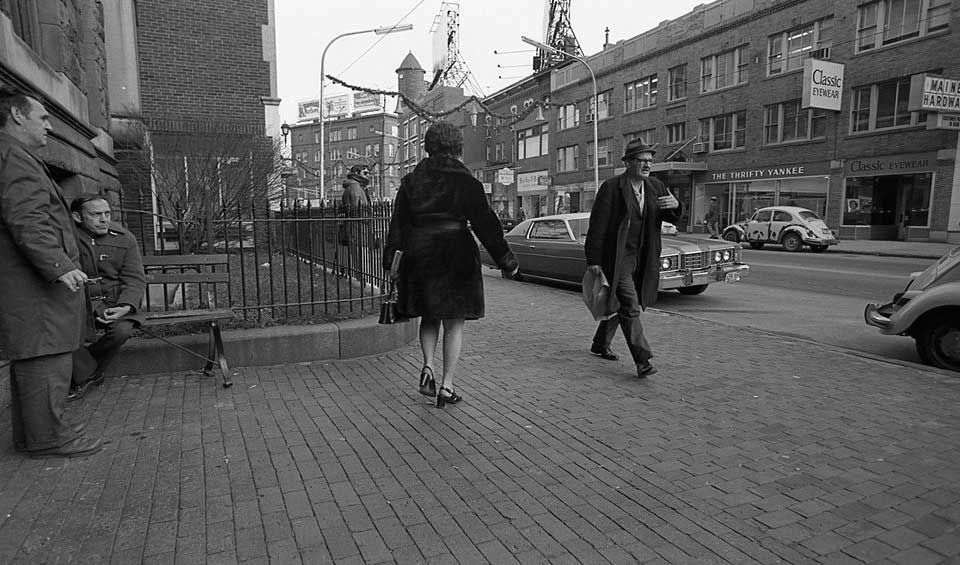 Near the old Portland Public Library on Congress Street.