Almost 20 years after a coast-wide fishing moratorium on Atlantic sturgeon was instituted, the giant, monstrous creatures of the deep are growing in numbers.

Atlantic sturgeon live most of their lives in salt water, but hatch and spawn in fresh water. The species was once abundant, especially during colonial times.

From the late 19th century through the mid-20th century, sturgeon caviar was in high demand. But the commercial fishery collapsed in the early 1900s, when landings dropped off dramatically. In the years that followed, the landings continued to decline until moratoria on landings were established, the most recent initiated by the Atlantic Marine Fisheries Commission.

Maine’s sturgeon population is now increasing, said Gail Wippelhauser, a state Department of Marine Resources research scientist. Wippelhauser said both Atlantic and Shortnose sturgeon have been tagged for a number of years to determine where they travel and where they spawn. The appearance and capture of Atlantic sturgeon in Maine rivers during the past decade indicates both species have increased in abundance. 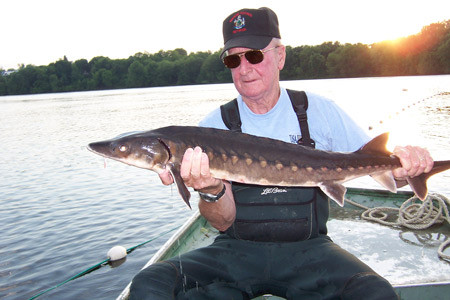 A Shortnose sturgeon caught in the Kennebec River near Augusta.

According to Wippelhauser, an article in the July 21, 1875 Daily Kennebec Journal reported under “Farmingdale Notes” that 65 sturgeon was the largest haul for Maine fishermen in one night. Given the date, the haul would have been spawning or pre-spawning Atlantic sturgeon.

The number of Shortnose sturgeon spotted in Maine during recent years has also been increasing, Wippelhauser said. Two “mark and recapture” studies showed the adult Shortnose sturgeon population in the Kennebec system almost doubled between 1977 and 2000.

DMR, the University of Maine, University of New England and the U.S. Geological Survey recently applied for a $626,182 species recovery grant for research of Atlantic and Shortnose sturgeon. Wippelhauser said the funds would be used to learn more about the fish “as they relate to specific challenges facing their management in the Gulf of Maine.”

Wippelhauser explained that DMR is frequently contacted by the state’s Department of Transportation and U.S. Army Corps of Engineers to provide an environmental review for proposed waterfront construction and repair and dredging projects. The data collected includes information on the species in the project area and recommends when the work should be done to protect impacted fish. Funding would help to cover a new technology to learn where sturgeon go when they’re in the ocean which could also help reduce them being the victims of bycatch.

Atlantic sturgeon are known for their large size and for their ability to leap as high as seven feet above the water. They emerge from the water with great force and can damage anything they come in contact with, including people, when they land. The fish make a loud splash when landing which can be heard many yards away on the surface and possibly farther away under water.

Scientists have been intrigued for years by the leaping behavior of sturgeon. They’ve suggested a number of reasons why the fish may leap, such as catching airborne prey, gulping for or expelling air, escaping predators, helping to shed eggs during spawning, and courtship behavior.

A group of U.S. Geological Survey researchers in Florida offered yet another theory. They suggested that sturgeon leap to communicate with each other. The researchers noted that sturgeon in the Suwannee River jumped frequently in the summer while staying in cool-water refuges. They confirmed that the leaps had a recognizable sound which could be heard more than a half mile away and probably farther under water.

The sturgeon leap to communicate with one another to help provide a cohesiveness among the species, which are often separated by dark and turbid water.

An Atlantic sturgeon that measured 7 feet was caught in Merrymeeting Bay.