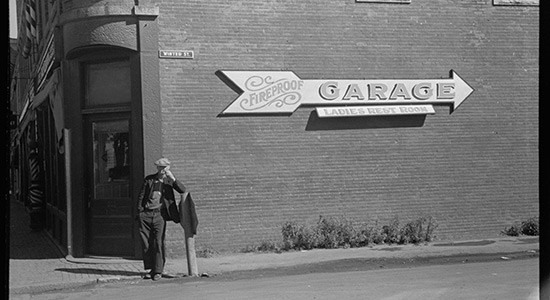 The photo that prompted contact from Arthur Rothstein’s family.

In each issue of The Working Waterfront, we feature a vintage photo from along the coast that reminds us of how our corner of the world has changed, or not changed, as the case may be. In the November issue, we published a photo on the OpEd page (page 11) of a man standing at the corner of Main and Winter streets in Rockland, circa-1937.

Then we received an email from Ted O’Meara (known to many as a one-time Congressional candidate and campaign manager for Eliot Cutler in the last two gubernatorial contests). O’Meara noticed that the photo, which came from the Library of Congress collection, was credited to Arthur Rothstein (1915-1985).

O’Meara said he lived next door to the Rothstein family for a time during his childhood in New Rochelle, N.Y. And he added an interesting tidbit: Rothstein’s son, performing under the name Rob Stoner, played bass and was the band leader for Bob Dylan during much of the 1970s.

That led to email contact with Stoner, who confirmed the facts about his father, including that he shot photos for the federal government during the Great Depression. From a website devoted to the Ken Burns documentary The Dust Bowl:

“Arthur Rothstein arrived in the Dust Bowl in April of 1936. He was 21 years old, the son of Jewish immigrants, born and raised in New York City. Fresh from Columbia University, Rothstein had been the first photographer hired by Roy Stryker, his former professor, at the Resettlement Administration, a New Deal agency that, from 1935 to 1936, relocated struggling families to communities planned by the federal government. The photography unit … documented for the public not only the multitude of problems the nation was facing, but what the government was doing about them.”

“My father’s parents were from the same part of Europe, towns that had been once been Lithuanian, then Polish and then Russian. I asked Grandma what life was like back then and there and she replied in her thick Yiddish accent, ‘You know Fiddler on the Roof? Like that! Two rooms, dirt floor and an outhouse in the back.’

“My father’s mom was Nettie Perlstein. Her father was Rabbi Isser (Israel) Perlstein. He was a cantor (he could chant the Torah), a mohel (he did circumcisions), and he was a shochet (trained to slaughter animals and birds in accordance with the laws of Judaism).

“When Rabbi Perlstein arrived in America in 1905, the Chief Rabbi of Boston sent him to serve Adas Yoshuron, an Orthodox congregation in Rockland. Back then, the congregation met in an upstairs room in the Berry Block, at 406 Main Street. In 1912, the congregation purchased their current shul, on Willow Street, from the Advent Christian Church.

“The rabbi’s wife, Chania and their seven children, followed Rabbi Perlstein to Rockland a year later, in 1906. The family lived in a house at 14 Holmes Street. Nettie, the oldest, was 14, but because she only spoke Polish, Yiddish and Hebrew, she was placed in the first grade. This was so humiliating that she talked her parents into letting her go to New York City where she could live with relatives, get a job, improve her English and send money home. Her parents made her wait till 1910, when she was 18.

“In December of 1911 the rabbi contracted an autoimmune skin disease after rejecting a cow for slaughter and died. His wife and the remaining six children soon joined Nettie in New York City.

“Nettie and her future husband, Isidore (my Grandpa Izzy) were introduced by landsleit, as was the custom. They married in 1913. Their first child, Israel (called Arthur) named for Nettie’s father, was born July 16, 1915. He grew up to be a famous photographer and my daddy!”

Rothstein later became a staff photographer for Look and Parade magazines. Segan added that her father loved Maine, as do she and her brother.

So the adage is true—a picture really is worth a thousand words.

The young Arthur Rothstein sets up his camera.