The Hinckley Company’s boatbuilding plant in Trenton was a hive of activity on a recent day, with 25 to 30 boats in different stages of production, from molding to sea trials.

It’s a typical scene these days.

“This is a new Talaria 43, a couple of months away from completion,” said Chief Operating Officer Mike Arieta amid the noise of power tools, as he walked down a catwalk that bisects an enormous building and oversees numerous luxury powerboats, lined up bow to stern on each side.

He crossed into another section, where skilled craftspeople worked on a half-dozen picnic boats, the company’s hottest product. Elsewhere, folks in the prefabrication shop lay up decks and create finely joined wooden interiors.

A quarter-mile down the road, equally talented employees are building luxury sailboats under the Morris Yachts brand. Inside the vast carpentry shop, General Manager Pete Carroll showed off a wealth of beautifully crafted wooden doors, frames and other furnishings that will become part of the six sailboats now under construction.

In the mill shop, one man, wearing eye and ear protection, is power-sanding a door frame for a 42-footer.

For years, these two highly regarded companies have been competitors, although largely targeting different segments of the market—power and sail.

Now they’re two sides of the same company. On Jan. 1, Hinckley finalized its purchase of Morris, a move expected to leverage resources and brands on both sides. Hinckley is also the parent company of Hunt Yachts, in Portsmouth, R.I., and is itself owned by Scout Partners, a New York investment firm.

Founded in Southwest Harbor in 1928, Hinckley has a storied history and today continues to experience great innovation and growth. The production backlog is at almost a 10-year high, with 56 boats splashed in 2015 and about the same number scheduled for 2016.

The workforce numbers almost 320, up from 220-240 two years ago. It owns six service yards along the East Coast and counts 1,500 Hinckley yacht owners and 5,000 service customers among its worldwide clientele.

What accounts for the growth?

New product in 2015 included the Bermuda 50 sailboat and a Talaria 43 jet boat. This year, Hinckley is launching a cuddy-cabin runabout version of its T34 pilothouse, with a new, proprietary vessel monitoring and management system called Hinckley OnWatch, which communicates both with owners and with Hinckley service providers and allows owners to control some of their boat systems via their mobile device.

Morris Yachts was founded in 1972 and has built more than 300 sailboats. In addition to the Trenton plant, it established other service/storage yards on nearby Mount Desert Island. This smaller company had more difficulty recovering from the downturn.

In 2007, more than 20 boats were built. Four splashed in 2014. Things are looking up now, with six boats in production and inquiries coming in.

“Cuyler will be retained for as long as he wants, and we hope that will be a very long time,” Arieta said. “He’s the guy who, if we need the magic of a special test sail or feedback on a product concept, there’s nobody better.”

In the end, the acquisition results in unbeatable synergy, he said.

“There’s a ton of unbelievable knowledge on both the Morris and Hinckley sides of the business, and that’s how value is built—getting ideas together and seeing what the next best one is. We just have so many more resources that way,” says Arieta. “The brands sitting alongside each other just makes perfect sense.”

Laurie Schreiber recently has published Boatbuilding on Mount Desert Island (The History Press) which highlights the rich and diverse history of major boatbuilders in the area in the first half of the 20th century, brought to life within the context of family and community. 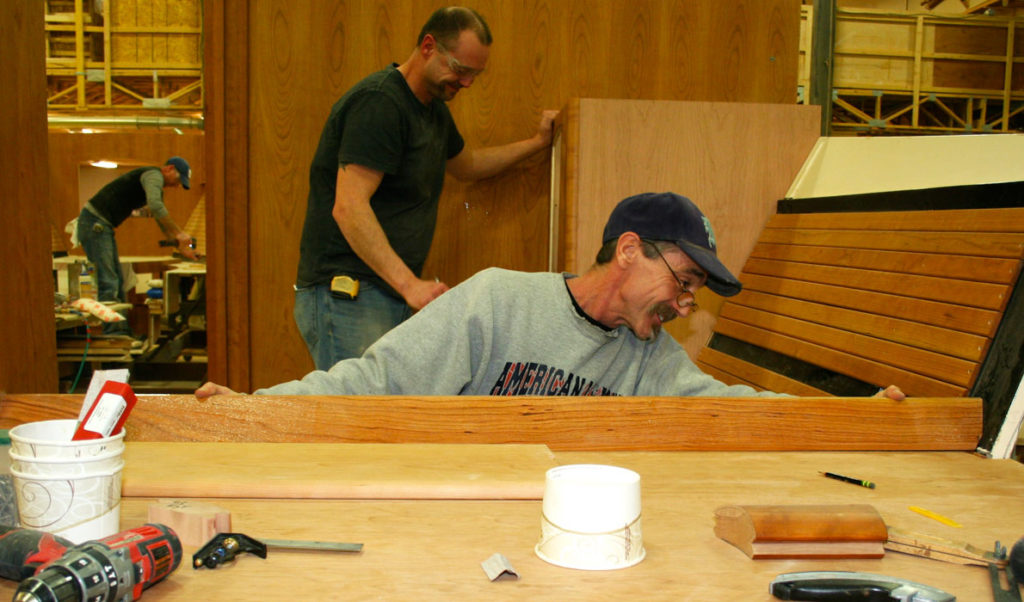