The idea behind the new Center for Maine Contemporary Art (CMCA) building on Winter Street just off Main Street in Rockland is to “turn a traditional museum inside out,” says executive director Suzette McAvoy.

The building, which has been under construction and visible to much of Rockland’s downtown over the last two years, is striking: floor to ceiling glass walls; flat roof lines, except where they are punctured by saw-tooth skylights; gray stone and cement walkways and plaza, and gray steel siding.

Passersby will be able to see some of the art through those windows, and that’s by design, McAvoy explained. It’s the opposite of the older “temple to art” approach, seen in museums with imposing steps, pillars and windowless walls.

It’s a bold entrance onto the Rockland stage, a community that is solidifying its role as the Midcoast’s art center. And that’s why CMCA made the move from Rockport.

“It’s something the CMCA board has talked about for the last 20 years,” McAvoy said. Rockport village was off Route 1 with limited visibility, no real foot traffic and no parking.

The presence of the Farnsworth Art Museum and the city’s several galleries that host “First Friday” open houses underscore that “The arts community has definitely moved to Rockland,” she said.

In 2009, CMCA faced serious financial problems and almost closed. McAvoy, who had been a curator at the Farnsworth from 1988 to 1995, and then again from 2000 to 2006, came on board the nonprofit to help right the ship.

“It really was a do or die moment,” she recalled.

Part of the discussion was about location. Places like Bangor and Brunswick were considered as new homes, but since the organization was born as Maine Coast Artists in 1952—originally hosting shows in barns and homes—the decision was made to stay in Knox County.

“It really made sense for us to focus here,” she said.

So when a former car garage that had been converted to a gallery was on the market just a stone’s throw from the Farnsworth, CMCA saw it as a “once in a lifetime opportunity.”

The first idea was to renovate, but when the building was found to have lots of asbestos, it was torn down.

“It allowed us to have a purpose-built building,” McAvoy said. Some $3.7 million was raised to build, part of a $5 million capital campaign to cover land acquisition, the demolition and architect fees.

Architect Toshiko Mori took her cues in designing the structure from the nearby older working waterfront buildings. McAvoy points to the stark gray walls that make up the rear of The Strand theater, which fronts on Main Street, as also setting the tone. Cold Mountain Builders of Belfast was the general contractor.

Though the gallery has no apparent elements of traditional New England architecture, it works in the location. The concept is not quite museum, not quite gallery.

McAvoy explains that CMCA is a nonprofit exhibitor of contemporary art, or a non-collecting museum. The idea is to show art that is contemporary—which is why it does not collect—but also not be in the business of selling the work, as a traditional gallery does.

“It’s a very common concept in Europe,” she said.

“It’s a way for their work to be seen by a larger public audience,” she said. McAvoy selects art for the three exhibit spaces within the building, each of which were designed to feature different sorts of work. The largest space, measuring 52-feet by 50-feet with no interior posts, features skylights to bring in northerly light. The bottom of the trusses supporting the roof are 16-feet above the polished concrete floor.

The other exhibit spaces have lower ceilings, which may be more appropriate for small works. One room can be converted to an auditorium for films and lectures, part of an effort to bring the public into the building more often. An “art lab” classroom also is included for workshops for children and adults, and a gift shop area is near the entrance.

CMCA is funded through donations, grants and membership fees. Members get free admission; the public pays $6. A public opening is scheduled for Sunday, June 26. 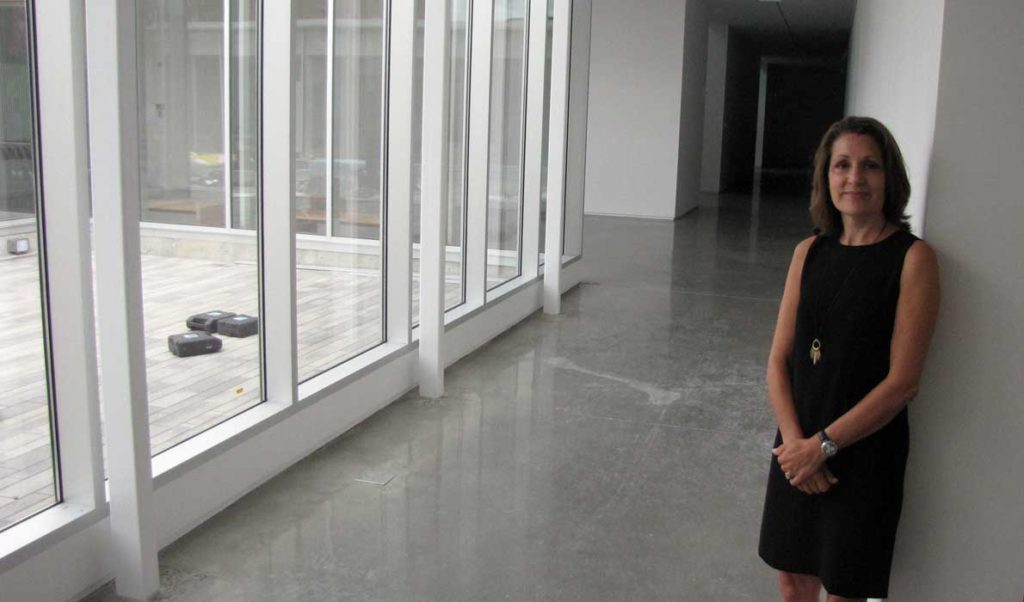 Suzette McAvoy in a hallway at the new Center for Maine Contemporary Art.