Across the state, high school ended this spring with a whimper. Students graduated at the peak, or perhaps post-peak, of an unprecedented pandemic. And with graduation, they move into an uncertain and unknown future.

But for three graduates in coastal communities—Peaks Island, Islesboro, and Eastport—the new normal has not dampened their enthusiasm for their next steps, nor, it seems, is it likely to deter them from pursuing their goals.

Lucia Daranyi, Olivia Kelly, and Elijah Brice each shared their thoughts about this milestone, and how the unusual times have impacted their plans.

Lucia Daranyi, 18, graduated from Casco Bay High School in Portland. She is the daughter of Ellen Mahoney and Ed Daranyi. Mahoney grew up in Portland, and Daranyi was living in Arizona, and the family ended up living on Peaks Island, Lucia said, because her older sister had friends on the island, and on visits, her parents were attracted to its quiet nature.

Growing up on an island for all of her 18 years “has been a huge part” of her maturation, she said. “Being an islander is really a big part of my personality,” and it impacted her decision to attend Colorado College in Colorado Springs in the fall, where she expects the same close-knit community that she found on the island.

She won a Geiger Scholarship, one of the Island Institute’s awards for island students.

It will be hard, Daranyi admits, to be far from the ocean. Living on the island “made me a lot more close with the ocean and nature in general.”

And it’s more than a passive appreciation. Daranyi is a founder of SolaRISE Portland, “a collective of Portland public school students” working to have the city get as much as 85 percent of its electricity from solar arrays.

She also is on the planning board for Maine Environmental Change Makers, another student organization.

“It’s been amazing to watch it come alive,” she said, and likes the action-oriented nature of the groups.

At Casco Bay, Daranyi enjoyed her AP U.S. history class and science classes. The school offers an expeditionary component, “with all of your classes centered around a world problem. We focused on the chemistry of the rivers in Maine,” and her group traveled to Millinocket to sample and analyze water from the Penobscot River.

In college, she plans to major in environmental studies, with a focus on public policy.

The virus-inspired shut-down of school has impacted her mood, Daranyi admits, which vacillates between hopeful and hopeless.

“It varies daily about how I feel about it,” she says. “It’s been bizarre. The big idea of ‘senioritis’ has been reversed. Everyone’s been wishing they could be back in class.”

There’s one upside, though: “I’m getting lots of time at the ocean now,” she says.

Olivia Kelly, 18, the daughter of Bill and Gale Kelly, graduated from Islesboro Central School as its valedictorian. The family—including an older and a young brother—moved to the island full-time five or six years ago. But she has been a student at the school for eight years, first commuting from a mainland town.

“They’ve all been very supportive,” she says of her teachers. “We’re a very small school,” with just nine in this year’s graduating class, “so it allows for personal relationships with most of your teachers. My advanced calculus class this year was just me,” she says. “The teachers are very interested in the individual.”

The school offers experiential learning during the sophomore year, with the opportunity for students to focus on a particular academic subject, try out a trade, or pursue personal growth. Kelly chose a project that studied the island’s groundwater.

“Islesboro has a sole-source aquifer,” she explained, and so she read about well-water protection and worked to have water test kits available to residents at the town office.

“There’s lots of landscaping that goes on in the summer,” she notes.

Though she lives on an island, Kelly already has seen a bit of the world. Taking classes through a semester at a private school based in Idaho, she spent five weeks in Chile, and two weeks in Patagonia, backpacking and kayaking on a river.

Kelly admits that Covid-19 has colored her final months at school.

“As a senior in the spring semester, it’s been difficult to stay focused,” she admits, “as everything is unraveling across the country.”

The island school, though, has been diligent in providing material for her studies in these final months.

Kelly plans on attending Tufts University in Massachusetts in the fall, the same school her father, who is a lawyer, attended. She hopes to major in international relations with a minor in Spanish. Studying abroad while enrolled at Tufts is part of her plan.

“I’m very much looking forward to going to school in the fall,” she says, and hopes on-campus living will be possible. “I’d love to have a normal freshman year.”

Elijah Brice, 18, the son of Coleman and Manuela Brice, is graduating from Shead High School in Eastport, where his family lives. That rural, easterly community is a long ways from Los Angeles, where Elijah was born, and from New Jersey, where the family lived until about eight years ago.

Brice spent one semester at Washington Academy in East Machias, but returned to Shead.

“I had a really great science teacher,” and he especially liked that classes were “all hands-on, project-based.”

Though he was considering attending Maine Maritime Academy in Castine, Brice has decided to put college on hold for now. Part of his decision came because of the uncertainty that comes with Covid-19.

“I’m a little gun shy about taking out a loan.” If he enrolled at MMA or another college and classes became online only, he feels he would not be getting his money’s worth.

But Brice is no slacker, and won’t be sitting out the fall months.

In 2018, he participated in the Island Institute’s Aquaculture Business Development training, and then launched Mainely Seaweed. “I started a kelp farm up here,” he says, and has already harvested a few thousand pounds.

Soon after, he earned a lobster license, and also began building fiberglass boats, the region’s Eastporter design, both the 17-foot and 24-foot versions. He secured molds from the former boat school in town, and some of the men who had taught at the school are mentoring him in the work.

“We all help each other here,” he says. “I’ve built a few 17s,” which feature an open deck and center console.

And as if that weren’t enough to keep him busy, he’s also rebuilding a 32-foot lobster boat, with the help of a friend.

Brice still hopes to earn a degree, possibly at the University of Maine, and he notes that his parents have supported his decision to wait.

“There’s plenty of marine industry opportunities up here,” he says. “I’m taking it day by day.” 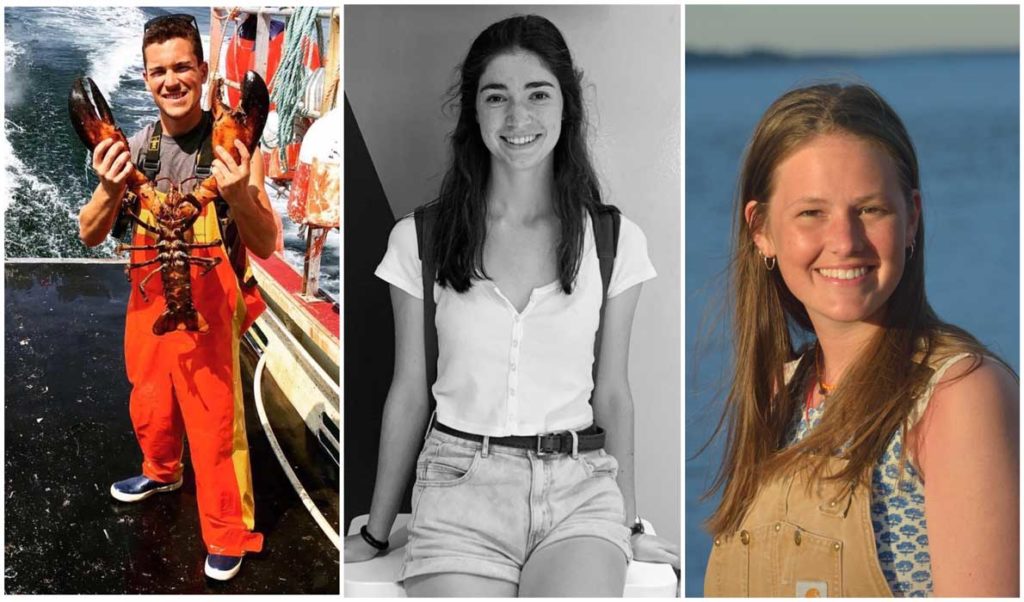