MACHIAS—To Julie Barker, Helen’s Restaurant is more than a building.

It’s a manifestation of the love she and her husband David have for Machias—the falls, the tides, the open ocean nearby, the woods and wildlife, the “Helen’s family” and a close-knit community of families and friends.

When the restaurant was destroyed by a fire of undetermined cause in the early-morning hours of July 11, 2014, the Barkers knew they would rebuild. Both have deep-rooted connections to Helen’s.

“Memories of working on Main Street in the early ’80s are so special to both of us,” she said. “David worked as a dishwasher and I was a server. We were two of the youngest workers at the time, and really got along well—obviously,” she joked, as they now are married.

In 1994, the Hanscoms opened Helen’s of Ellsworth, later sold it, then sold the Machias Helen’s to their son David Barker and his wife Julie in 2008. The original owner, Larry Mugnai, had remained involved with the restaurant through its transitions until 1994.

The Barkers’ memories go back to Helen’s original location, on Main Street, when the Carters owned the restaurant. They were there when the restaurant moved to Route 1.

“Since we were 15 years old we have had a connection to Helen’s,” Julie said. “David’s family bought Helen’s in ’76 and I married into that family, so our lives have revolved around what was happening at the restaurant.”

Their connection to the restaurant was interrupted from 1986 to 1989 when they moved to the Netherlands: David was in the Air Force and worked at a Dutch military base providing security for weapons the U.S. loaned the Dutch. They loved it there.

“Terrific experience living in the local community as a young couple!” Julie said.

But when they began having children, they grew homesick for their families and community; most importantly, they wanted their children to grow up surrounded by relatives. So they moved home. Julie went back to Helen’s as a waitress and private caterer and David as Helen’s manager. They bought and renovated a 19th-century farmhouse atop 40 pastoral acres stretching along the shore of the Machias River. In 2005, they opened it as The Inn at Schoppee Farm and also opened the Schoppee Dairy.

In 2008, the Barkers jumped at the chance to buy Helen’s. They stayed true to the restaurant’s atmosphere and delicious fare, while also offering healthier food options. For example, diners can still have fried haddock, or they can have it broiled and topped with garlic sesame sauce served over baby spinach with rice, as opposed to fries.

They’ve maintained long-standing traditions, such as composting food waste and buying locally from fishermen and farmers.

Composting and farm-to-table were “alive and well at Helen’s as the norm long before it became trendy elsewhere years later,” Julie said.

Helen’s bakery recipes have not changed over the years, although they no longer use lard.

“They are tried-and-true, old-fashioned goodies that have stood the test of time,” said Julie.

Although it was Helen’s blueberry pie that got the attention of Life magazine for an article “In search of America’s best” in 2010, that circumstance was a bit misleading, she noted.

“Blueberry pie in Washington County should be the best in the country,” she said, in reference to the county’s position as the nation’s top blueberry producer. “But Helen’s was always famous for strawberry pie. Locals have their own recipes for blueberry pie, so it was never a good seller until the Life article. That article really boosted Helen’s reputation as well as expectations.”

At the time of the fire, they had 40 to 50 employees. The state’s Department of Labor stepped in to help folks find new employment, and the community set up an online fundraiser for employees.

It’s taken a year to rebuild, so it’s not surprising that a few members of the “Helen’s family” are now involved with new jobs, or have moved. But for this spring’s opening, the restaurant is fully staffed again, with 48 employees. The new building looks much the same as the original, from the parking-lot side. The dining area, seating 120 inside and 24 on the deck, has a different feel and set-up, and the Barkers used this opportunity to improve the kitchen and make it more efficient.

Since the fire, the Barkers have received countless letters, photos, phone calls and stops on the street, with people eager to tell stories about what Helen’s means to them. Julie said she and her husband are grateful for these connections—and eager to reciprocate.

“Often, I am brought to tears by different stories—an elderly person about one of the Mugnais, or a homemade card from a new young Helen’s lover,” she said. “Like Helen and Larry, Joan and Bob, and Judy and Gary, we are the caretakers of this Machias landmark, and we want to continue to make a positive impact on our community and co-workers.” 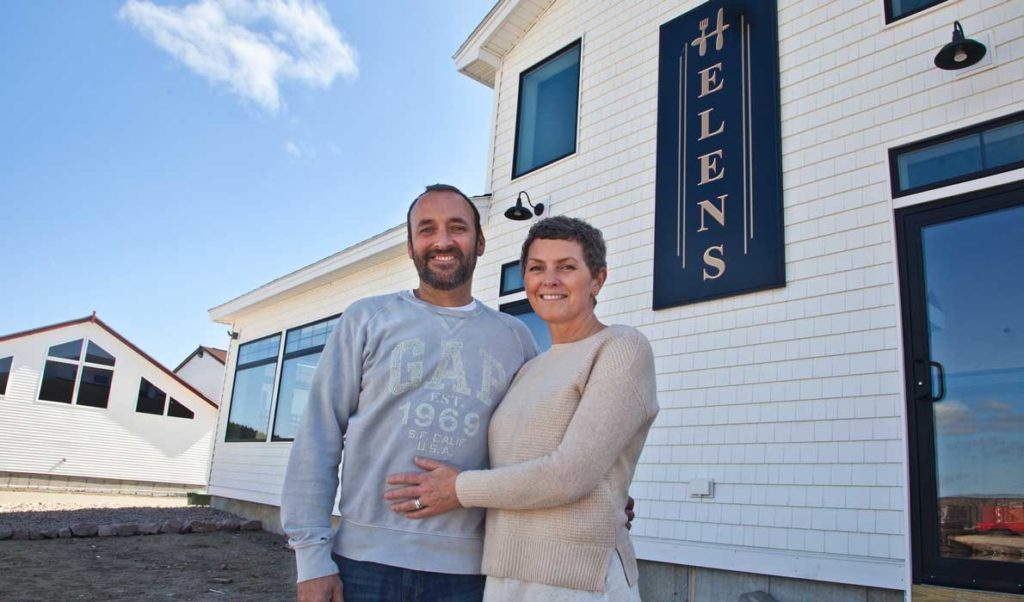